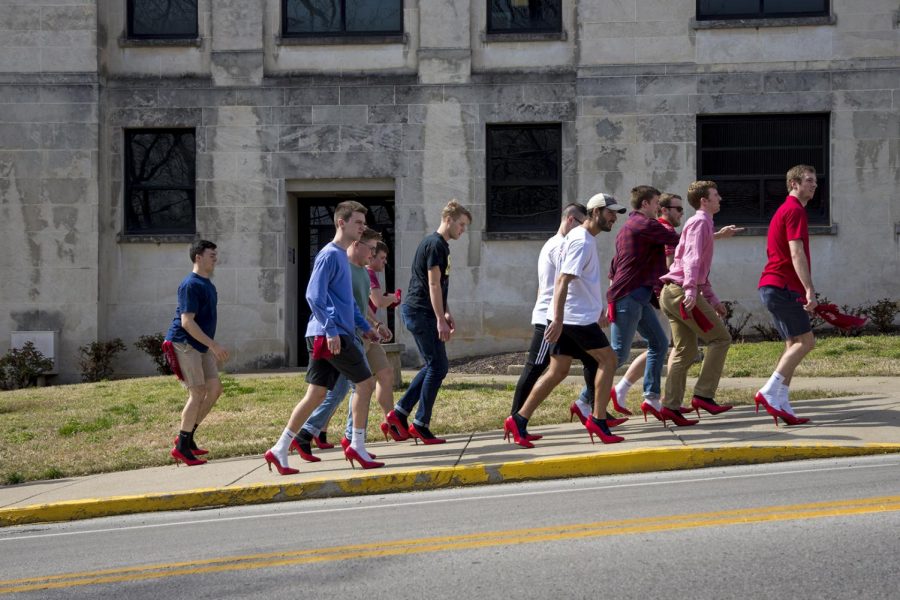 WKU Interfraternity Council hosted the 9th annual "Walk-A-Mile" on April 11 where volunteers climbed the Hill in a pair of high heels. The fundraiser raised awareness towards sexual assault on college campuses.

The WKU Interfraternity Council, or IFC, hosted the 9th annual “Walk-a-Mile in Her Shoes” to spread awareness for women’s sexual assault and raise money for Hope Harbor, a sexual trauma recovery center in Bowling Green on April 11.

The premise of the walk makes use of the phrase “walk a mile in my shoes” by giving men the chance to walk in red high heels to feel just one of the many struggles women face. The intent was to show that although walking in heels is hard, the reality of sexual assault is much harder. April is Sexual Assault Awareness Month.

“It is important because it shows that our fraternity men here at WKU are seeking to prove wrong the negative stereotype Greek organizations get and lead our campus in a positive direction,” Hopper said.

The walk lasted roughly an hour, and although the participants were men, women also showed up in droves to support the cause. WKU faculty, staff and police officers, along with members of the community, also attended to show their support.

In attendance was also Elizabeth Madariaga, of the WKU Counseling and Testing Center. Madariaga serves as the sexual assault services coordinator, and the issues she fights for inspires Savannah Molyneaux, a junior and current SGA executive vice president. Molyneaux is also president of Sigma Kappa sorority.

“As a sexual assault survivor and a current chapter president myself, I was proud to hear the remarks from Andrew Rash as he urged participants to think about the struggles women on campus face every day,” Molyneaux said. “I think he did an amazing job of incorporating Greek life and getting people excited about a fun event while still highlighting how trauma affects one’s life daily, much as it has for myself.”

Hopper and IFC Vice President Wood Brown, a sophomore and member of Pi Kappa Alpha fraternity, both said the walk raised over $2,500 for Hope Harbor. Brown said IFC promotes the idea that sexual assault is preventable.

“If people recognize sexual violence as a clear issue that encompasses a vast population of both men and women, then more people will seek to fight it,” Brown said. “If we do those things, sexual violence will not be a prevalent issue on college campuses anymore. We must continue to tell individual stories and struggles to bring the movement to life.”