Statewide rallies in support of higher education scheduled for Thursday 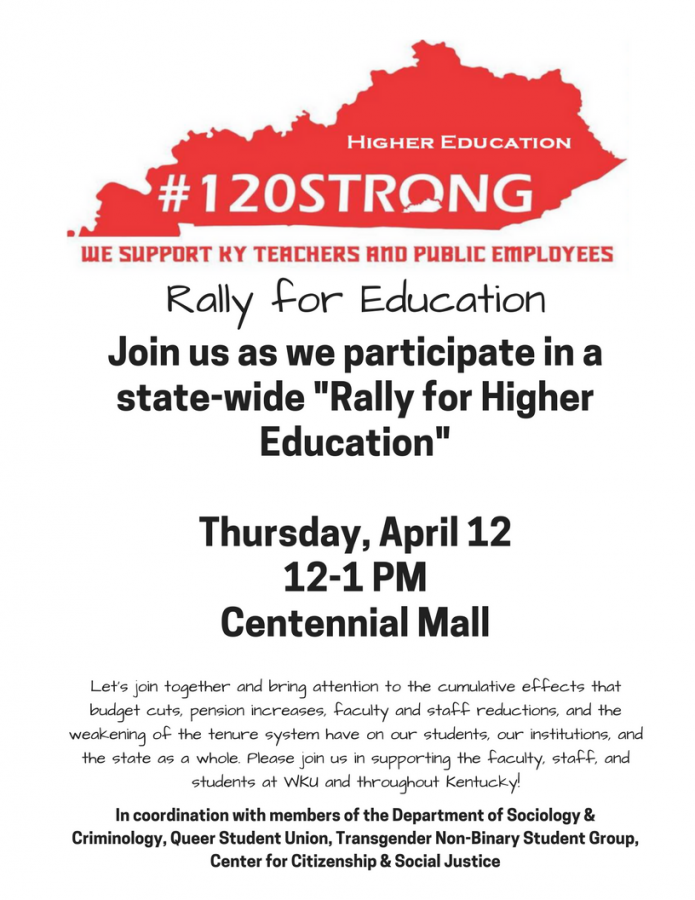 Kentucky’s public universities are planning to take a stand this week in support of higher education.

An organizer for the WKU rally stressed this is a student-led movement. Krystal Carver, a student graduate assistant in the sociology department, is one of the student leaders for the WKU rally. The Herald has been in contact with Carver and will update with her comments.

A flyer for the rally calls for WKU faculty, staff and students to “join together and bring attention to the cumulative effects that budget cuts, pension increases, faculty and staff reductions, and the weakening of the tenure system have on our students, our institutions, and the state as a whole.”

Leah Ashwill, director of the Center for Citizenship and Social Justice, said the center is working to support the rally and will provide a space for students to organize.

Ashwill said it’s becoming clearer that education in Kentucky, and other parts of the country, are coming under attack, and higher education is not excluded.

“As decisions are being made at the state level, it feels like it’s now or never to express concerns,” she said.

Bevin and the General Assembly have had higher education in their crosshairs this session.

Bevin proposed a 6.25 percent cut to higher education during his State of the Commonwealth and Budget Address earlier this year. The cut would amount to a loss of $4.6 million for WKU. However, President Timothy Caboni has previously said a portion of this would be returned to the performance funding pool for WKU to gain back.

HB 200, the state budget bill, was vetoed by Bevin yesterday, as was HB 366, a tax bill, according to the Herald-Leader. Lawmakers will return to Frankfort on Friday and Saturday to consider overriding any vetoes.

HB 200 contains the following which would impact WKU, and other public universities:

A 2 percent reduction in funding to support the Gatton Academy, which is $75,000 over two years.The Kentucky Mesonet is fully funded in the budget, but was originally zeroed out in Bevin’s plan.No direct relief is included for WKU’s employer contribution payments to the Kentucky Employees Retirement System, and Caboni has anticipated those costs to significantly increase. A provision to include asset preservation matching funds to help campuses address a backlog of maintenance on university buildings and infrastructure was not included. Bevin’s original budget included a $300 million “asset preservation bond pool” in order to “preserve and upgrade facilities owned by the Commonwealth,” according to the Herald-Leader. Universities would have access to these funds. The budget also included language which would allow universities to eliminate tenured faculty positions when an academic program is discontinued. Caboni has said current guidelines set by the American Association of University Presidents provides a “fair, reasonable and effective pathway to manage downsizing or elimination of academic programs.”

Earlier this year, Caboni said WKU’s budget deficit could be as large as $40 million. The $40 million comes from our $15 million deficit this fiscal year, the possible state cut of $4.6 million, WKU’s nearly $9 million pension obligation and an anticipated $10 million deficit from enrollment changes and fixed costs.

Ashwill said she thinks a lot of people at WKU have their fingers crossed that the anticipated cut to WKU won’t be as harmful as predicted.

WKU has already eliminated 119 full-time positions and one part-time position across the university in an attempt to address a $15 million deficit from this fiscal year. Those eliminations were recommended by the Budget Council to reduce the university’s workforce.

“Based on previous years’ experience, and the environment amongst our state legislators, this year is very disheartening and the likelihood of seeing those cuts realized is really likely,” she said.