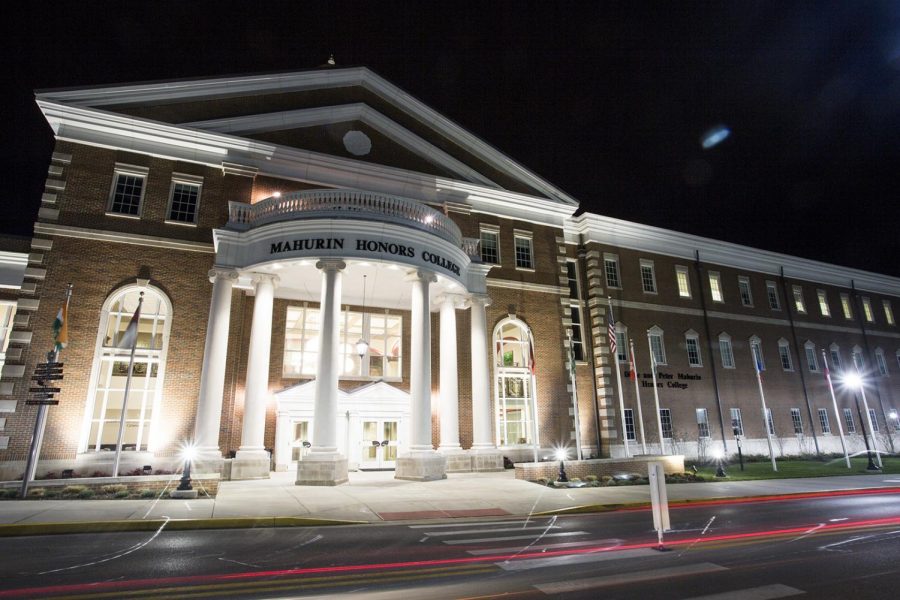 Car taillights pass in front of the Mahurin Honors College on March 8, 2018.

In a period of a few weeks, WKU’s Mahurin Honors College announced that one of its two academic advisers had been fired and its executive director had accepted a fellowship position and will be gone for the upcoming academic year.

Academic adviser Sharon Leone was removed from her position earlier this March in WKU’s first round of layoffs. Craig Cobane, the executive director of the Honors College, announced in an email March 22 that he will be temporarily stepping down for the 2018 school year to accept a fellowship with the American Councils for Education. An office associate in the Honors College was also removed, according to a list of eliminated positions.

Cobane was contacted for comment about the changes, but he did not respond in time for publication.

It was announced on Monday that Nancy Rice, a biology faculty member, will serve as the acting executive director of the Honors College.

Cobane said in an email to the students in the honors college he will be placed at another institution for the duration of his fellowship where a university president will mentor him. He said an interim executive director will be appointed during his fellowship, and he is currently in discussion with the provost to identify that individual.

Leone announced the loss of her job in an email sent to the students she advised. In the email, Leone said she was sad to leave her job when “good work is being done,” but she will still be on campus this semester finishing graduate work.

“I have immensely enjoyed my time here at WKU and especially the relationships I’ve made with you all,” Leone said in the email. “I’ve had amazing conversations and can confidently say I’ve learned as much from you as you have from me.”

The college is currently operating with one adviser, Siera Bramschreiber.

Erlanger sophomore Cassidy Townsend had Leone as an adviser. Townsend said she enjoyed working with Leone and viewed her as a valuable professional resource.

“She has had experience with English abroad, which is something I’m planning on doing,” Townsend said.

Townsend said she believes the Honors College is doing the best it can under the circumstances.

“I think next year will be more indicative of how well they’re really going to handle the changes,” Townsend said.

Bloomfield freshman Parker Carwile said he is confident in the Honors College’s ability to handle these changes.

“I think the Honors College has handled it as well as they can so far,” Carwile said.

Carwile said he was also one of Leone’s advisees, and he found out about Leone’s job loss through an email.

“I only met with her once,” Carwile said. “But I felt as if she genuinely cared about my college experience and about me taking advantage of all the opportunities I had available for me.”