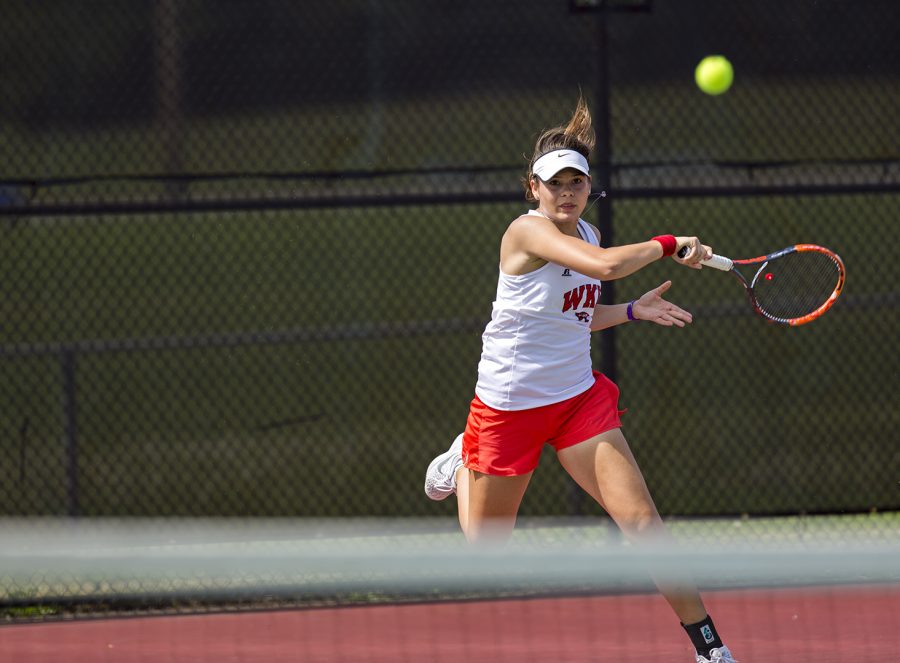 Cindy Oest competes in a singles match during the last match of the season against East Tennessee State University on April 13, 2017 at the WKU tennis courts. The Lady Toppers faced off against Florida International University in Nashville on Sunday and came out with a 4-1 loss against the Panthers.

The Lady Toppers were up against some of the top players in the nation in a neutral site match hosted by Lipscomb in Nashville. WKU’s doubles tandem of freshman Moka Ito and sophomore Monica Malinen took on the number 21 doubles team in the country in FIU’s Maryna Veksler and Ulyana Grib. Malinen and Ito fell to Veksler and Grib 6-4.

Ito also took on the number five player in the nation in singles play. She had FIU’s Andrea Lazaro on the ropes, as she led 7-6,4-1. She was just two games away from defeating Lazaro in straight sets before the final set went unfinished as FIU had already clinched the match win.

The Lady Toppers dropped two out of three doubles matches, as seniors Elpida Malamou and Violetta Shatalova also dropped their doubles match to FIU’s Lazaro and Nerma Caluk. Sophomores Natalia De Ugarte and Cindy Oest were down 4-5 against FIU’s Mina Markovic and Sandra Bozinovic, but the matchup went unfinished.

The Lady Toppers’ final match of the regular season is Saturday. WKU will hit the road again to take on the University of Memphis.