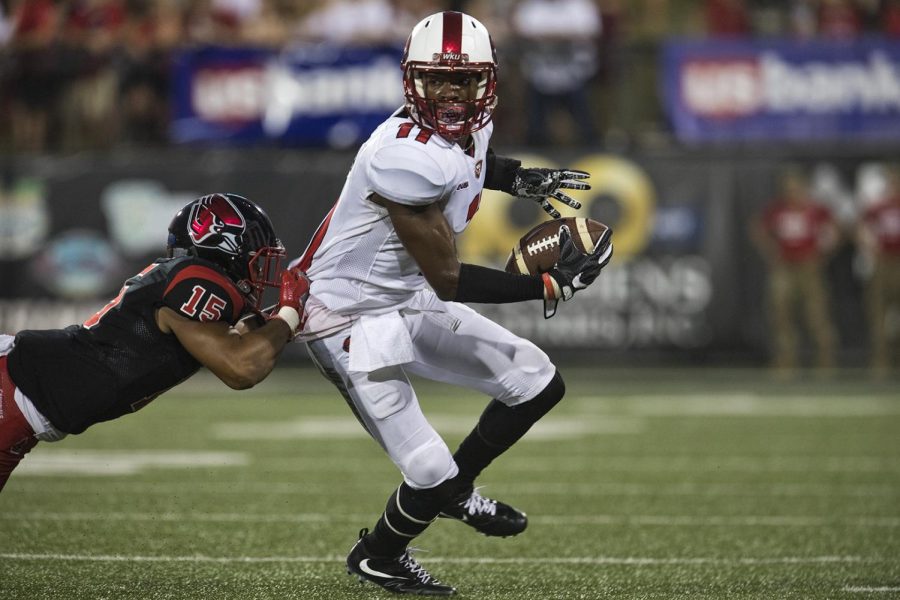 As the spring game approaches, there’s no doubt the most notable position battle for the WKU team is at quarterback. But there’s also plenty of competition going on between the players the quarterback position will be throwing to next year.

The Hilltoppers lost wide receivers Nacarius Fant and Cam Echols-Luper and tight end Deon Yelder to graduation. The trio made up WKU’s top three leaders in receptions in 2017. The Hilltoppers are bringing back a handful of experienced players in 2018 in year two under head coach Mike Sanford.

“Well obviously we lost some veterans in Cam, Nacarius and KT [Kylen Towner],” offensive coordinator Junior Adams said. “But all these guys we have coming back have playing experience. They all have catches, a lot of them have touchdowns. We’re a year older experience wise with what we’re doing offensively. This offseason was big for us. When we got back from winter break our receivers have been hitting it hard as far as just learning football, just as far as learning coverages and concepts.”

Redshirt junior wide receiver Lucky Jackson leads a barrage of receivers returning in 2018. The Lexington native caught 39 passes for 600 yards and three touchdowns in 2017, all which are the most among WKU’s returning players. His 15.4 average yards per reception led all WKU receivers, highlighted by a 93-yard touchdown catch and run in the Hilltoppers’ 41-38 thrilling victory over rival Middle Tennessee that made WKU bowl eligible. Jackson cracked the 100-yard receiving mark three different times in 2017, but was held under 60 yards in WKU’s 10 other contests. As 2018 approaches, Jackson will consistently need to perform at a high level as he is the frontrunner to be the number one receiver on the depth chart.

“I have a bigger role, and I have to step up and be a leader for the young guys behind me,” Jackson said. “I’ve got to be that big crutch and give them that shoulder to lean on when they need help.”

Joining Jackson is fellow redshirt junior Quin Jernighan, redshirt sophomores Xavier Lane and Jachour Pearson and true sophomore Jacquez Sloan. Jernigan caught 36 passes for 393 yards and three touchdowns in 2017, highlighted by his go-ahead 30-yard touchdown catch late in WKU’s 35-31 win over Old Dominion. Lane caught 27 passes for 336 yards as a redshirt freshman, but you can expect his productivity to go up in 2018 as his 6-foot-4-inch frame makes him a mismatch for defensive backs out wide. Pearson and Sloan both enter as sophomores eligibility-wise and will look to give the Hilltoppers plenty of speed on the outside.

“Xavier Lane is having a pretty good camp right now, catching the ball and getting over the top on guys,” Adams said. “Jacquez Sloan obviously is our speed guy and Quin Jernighan made some plays for us last year. He’s been really consistently catching the ball.”

The annual Red-White Spring game takes place this Saturday at Houchens-Smith Stadium. It will give a glimpse of what the depth chart might look at the wide receiver position as well as the quarterback position.