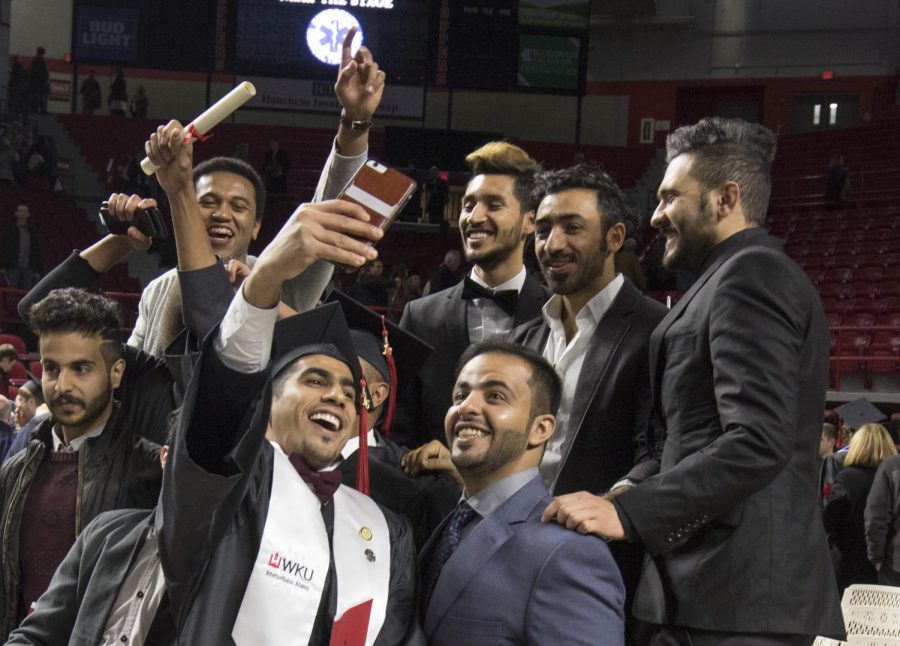 A new graduate takes a celebratory selfie with friends and other graduates during the commencement ceremony on Saturday, December 10th, in Diddle Arena.

As spring commencement looms ever closer, more details have been released about WKU’s two-day graduation ceremonies.

Friday’s ceremony will begin at 6 p.m. at Smith Stadium. During the ceremony, each college will acknowledge their graduates and President Timothy Caboni will present the graduates to the Board of Regents for the conferral of degrees.

The ceremony will feature remarks from Caboni and SGA President Andi Dahmer. It will also include the commissioning of ROTC cadets, the recognition of the Odgen Foundation Scholar and recognition of the John D. Minton Award recipient

Following the ceremony will be the Big Red Bash on South Lawn at 7 p.m. The event will feature music, entertainment, food vendors and celebrations held by each college.

There will also be fireworks.

On Saturday, May 12, college recognition ceremonies will take place in E.A. Diddle Arena beginning at 8 a.m. with the College of Health and Human Services.

Graduates should come dressed in full regalia to both the Friday and Saturday ceremonies, according to the WKU commencement website.

Here are the times for each college ceremony:

College of Health and Human Services at 8 a.m.University College at 10 a.m.Ogden College of Science and Engineering at noonCollege of Education and Behavioral Sciences at 2 p.m.Potter College of Arts and Letters at 4 p.m.Gordon Ford College of Business at 6 p.m.

According to a February press release, University Registrar Tiffany Robinson said she anticipates the graduation ceremonies will “last no more than 75 minutes, will include the individual recognition of graduates, graduates shaking the president’s hand, in addition to other special touches the college includes in the ceremony.”