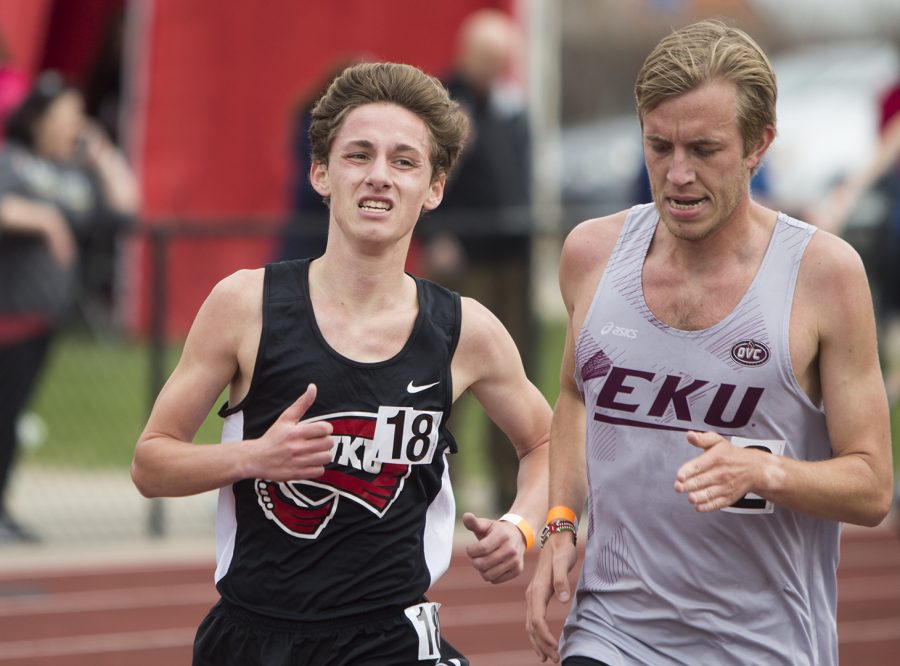 Taylor Scarbrough runs the men's 3000m race at the Hilltopper Relay event, which took place on Friday, April 6 at the Charles M. Rueter Track and Field Complex. Scarbrough placed 3rd in the race.

The WKU Track and Field team came close to double digit first-place finishes for the second straight weekend while competing at the Governor’s Invitational on the campus of Austin Peay.

The team pulled in eight first-place awards and 24 top-five finishes. Junior Austin Hayes was the highlight of the one-day event for WKU. Hayes won the 200-meter for the second meet in a row, and again set a new personal record at 21.11 seconds. Hayes then set a personal record in the 100 at 10.51 seconds, taking first place in that event as well. The Hilltoppers brought home first place awards in both the 110 and 400 hurdles, as senior Jonathan Hayden clocked a 14.24-second time in the 110 hurdles and freshman Alec Tanksley ran a personal record 53.99 seconds in the 400 hurdles.

Head coach Erik Jenkins said he hoped the weekend was a good look of what is yet to come for the team.

“Austin Peay provided a great opportunity to us to work on the finer things necessary to be successful in the championship portion of the season,” Jenkins said. “The student-athletes competed well and we are looking forward to the next six weeks.”

Both men’s relay teams took home first place awards, as the 4×100 and 4×400 teams dominated the events. The 4×100 team ran a time of 40.03 seconds, winning the event by more than three seconds. The 4×400 team clocked a time of 3:15.75 to win by more than five seconds. Senior Desmond Mobley also earned a first-place finish in the high jump with a height of 2.01 meters.

The team will split up this weekend, as some team members will head for the the Mount Sac Relays in Torrance, California, and others will compete in the Georgia Tech Relays in Atlanta. Each competition will hold events on Friday and Saturday

The Hilltoppers had success at each of these competitions a year ago.

“Mount Sac consistently provides a quality environment to learn from against the world’s best,” Jenkins said after last year’s meet.

At last year’s Georgia Tech Relays, the Hilltoppers recorded 12 top-five finishes. Sears claimed a first-place finish in the long jump, and Morris won the 200 dash. Hayden finished third in the 110 hurdles with a time of 14.18 seconds. Both Hayden and Terrell posted personal bests in the hurdles that day.

This will be the second-to-last weekend of WKU’s regular season, as the Hilltoppers will stay in-state for a meet at University of Louisville to conclude the regular season.