Hilltoppers draw even in conference play with series win over Marshall 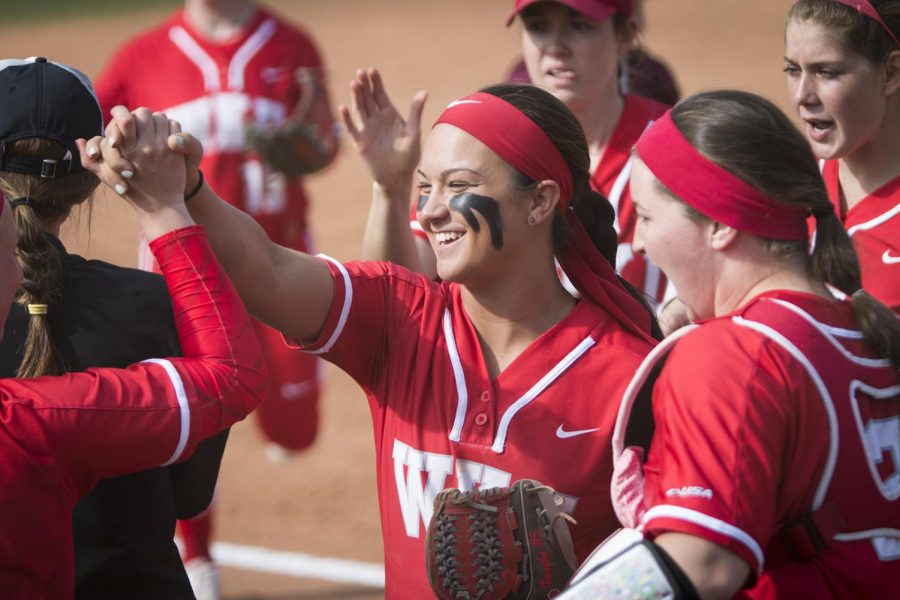 Redshirt senior Brittany Vaughn celebrates with the team during the the first game during the WKU vs. EKU doubleheader on April 11 at the softball complex. WKU defeated EKU 6-3 in the first game, but lost 8-4 in the second.

The WKU softball team claimed two of three games against conference foe Marshall to end a five game losing streak. The Hilltoppers split Saturday’s doubleheader with the Thundering Herd but claimed the series with a win Sunday morning.

WKU trailed in each game of the series, overcoming a 6-0 deficit to win game one 8-6. The six-run comeback was the largest of the season for the Hilltoppers, and their eighth come-from-behind win of the year.

“I think we’re kind of used to being behind,” head coach Amy Tudor said. “It’s a comfortable feeling versus getting ahead and learning how to handle a lead.”

The story of game one came from the bat of senior shortstop Brittany Vaughn. Vaughn went 4 for 4 with four RBI and a pair of home runs, the second of which was a three-run home run to tie the game at six in the bottom of the fourth.

All six of Marshall’s runs were scored in the second inning, with four of those coming on a grand slam from freshman first baseman Aly Harrell. WKU pitchers Shelby Nunn and Kelsey Aikey combined to shut out the Thundering Herd from that point on.

Game two of Saturday’s doubleheader followed a similar script to game one, with Marshall jumping out to an early 5-0 lead following a three-run home run by Brianna Daiss with two outs in the bottom of the third.

“When you have a few innings that creep up on you, it’s a maturity thing,” Tudor said. “You have to be able to figure out how to get people out in different ways.”

WKU would battle back and eventually tie the game at five on an RBI single by junior outfielder Jordan Vorbrink in the bottom of the seventh to force extra innings. Marshall scored two runs in the top of the eighth to win the game 7-5.

The rubber match of the series was played early Sunday morning after being pushed up for weather concerns. Nunn started on the mound for WKU and pitched a complete game, only allowing one run on two hits.

“I thought Nunn bounced back and was fantastic,” Tudor said about Sunday’s performance. “Her pitches were working today, and after she got past inning one, she was really on a roll and got in sync and fought through.”

The one run Nunn allowed came off a bases-loaded walk in the top of the first to put the Hilltoppers in another come-from-behind situation. WKU tied the game on a solo home run from freshman catcher Kendall Smith in the bottom of the fourth, her seventh of the season.

The score remained 1-1 until the bottom of the sixth, when sophomore infielder Morgan McElroy dropped a bunt that allowed junior infielder Rebekah Engelhardt to score on a throwing error. That put the Hilltoppers up 2-1. Freshman Maddie Bowlds hit a two-run single later in the inning to put WKU up 4-1.

“When the bottom of your lineup is hitting, it’s fantastic,” Tudor said. “Kendall tied up the game with the big home run, and Maddie got the two RBI. They stepped up, and I think they’re getting lots of great experience.”

WKU moves to 26-20 overall on the season with the series win, and now finds itself even in Conference USA play at 9-9. The Hilltoppers will be back in action this weekend in Boca Raton, Florida, for a road conference series with Florida Atlantic.

“Every game is a dog fight,” Tudor said. “We’ve got a gameplan, and we’ll have to go put it into play. We’ll be ready.”