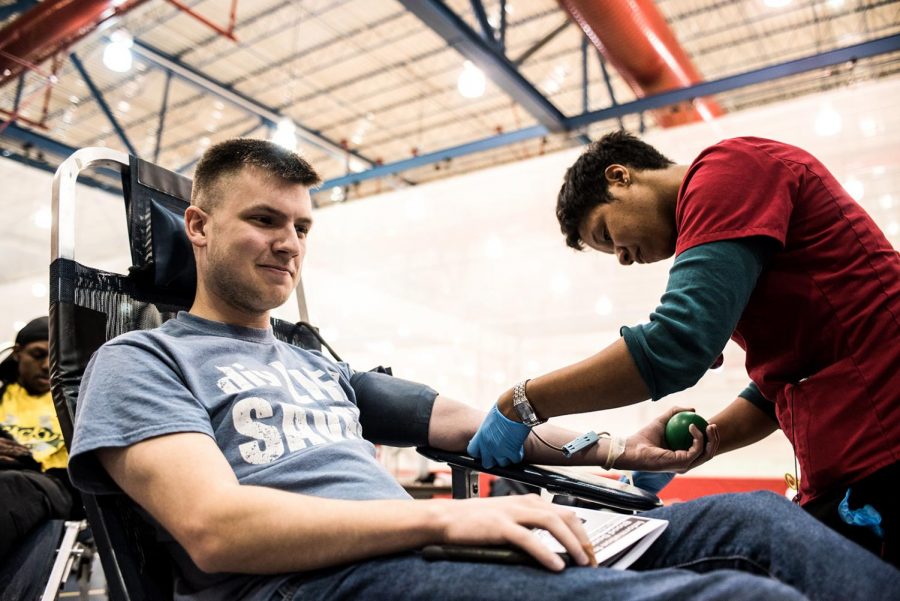 Jack Martin cringes as a nurse adjusts his needle during Thursday's blood drive. "I've given blood quite a few times now, it doesn't hurt as much as it used to," Martin said.

The annual Greek Week Blood Drive, hosted by the American Red Cross, has been a staple at WKU for about 40 years. Open to all students, faculty and willing donors, the blood drive will take place from 10 a.m. to 6 p.m. April 23-25 at Preston Centers blue courts.

Interested volunteers may schedule an appointment online at the American Red Cross website or at the Preston Center. Andrew Rash, coordinator of Student Activities for Greek Affairs, said everybody is welcome to donate blood at the drive.

“There’s always a constant need for blood,” Rash said. “We’re very happy to have anybody and everybody help donate to this cause.”

Rash said nearly 1,300 pints of usable blood were donated last year, which had the chance to save around 3,600 lives. Rash said he is proud of the blood drive’s role in helping others.

Brett Crystal, donor recruitment representative at Nashville Area Red Cross, said this drive is the largest within the region, which spans across Kentucky, Tennessee and into Illinois and Missouri. Crystal said he believes blood drives are a great way to directly impact people in need.

“The direct nature of it is something I’m very passionate about,” Crystal said. “There is no replacement of blood, so it depends on volunteer donors.”

Crystal said he believes everybody who donates has the potential to save lives and make an impact.

“The more you do it, the more impact you have,” Crystal said. “With just a short investment of your time, you make a difference.”

Greek Week Blood Drive chair Kaleb Hampton, a senior from Glasgow and former Phi Delta Theta president, said in a text message that the blood drive is an opportunity for all of WKU and Bowling Green to serve others.

“The blood drive is an event where not only the greek community but the entirety of Western Kentucky University’s students, faculty and staff, along with the Bowling Green community, has a chance to make a difference,” Hampton said in the text message.

Greek Week Blood Drive chair and Hopkinsville senior Sally Smith, representing Chi Omega sorority, said she believes the blood drive is a great way for WKU and Bowling Green to work together, despite the competitive nature of Greek Week.

“It’s just a time for everyone to come together,” Smith said.

On March 26, Greek members affiliated with the Greek Week Tug event participated in a one-day blood drive at Preston. Smith said 126 pints of blood were donated at the drive, capable of saving 298 lives.

Smith said she believes the success of the Tug drive is something the Greek Week drive can expand on.

“That was just a taste of what we’re capable of doing for American Red Cross,” Smith said.