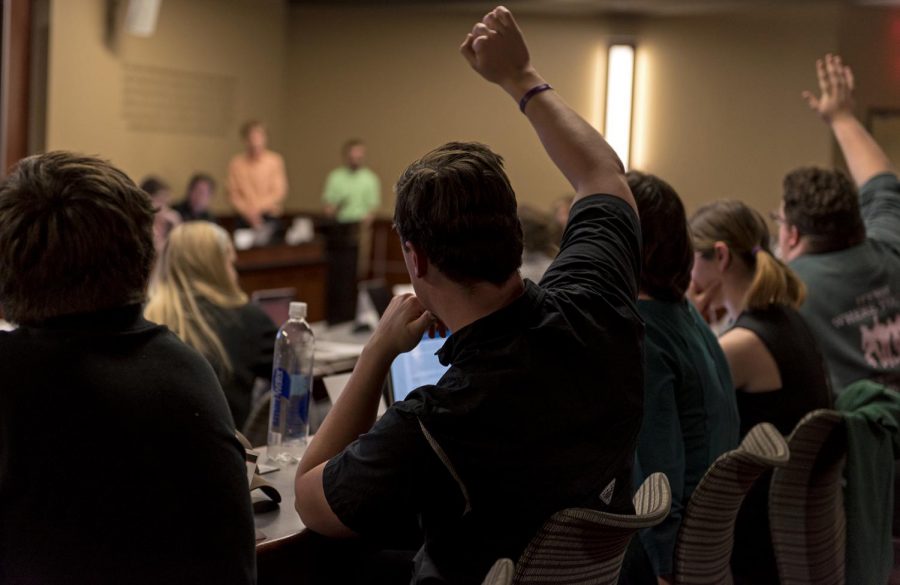 Members of SGA debate a bill that could be put in place that reaches out to "non traditional" students and invites them to run for a position in the SGA during the meeting on Feb. 27. Members go back and forth arguing for or against certain things the bill states.

“These students are still enrolled in classes and are still members of the WKU campus community; however, they are ineligible to receive the benefits of a part-time job,” the resolution read.

International graduate students are legally ineligible to work off-campus, inhibiting them from attaining any stipend to pay for living expenses, according to the resolution.

In her author speech for the bill, Peter said international graduate students are ineligible from working on campus because in order to work on campus, the student must be taking a minimum of six credit hours.

During the academic year, international students must be enrolled full-time in order to work on campus. To be considered full-time, those students must be taking at least 12 credit hours as an undergraduate or 9 credit hours as a graduate. To work on campus during the summer, an international student must be returning the following fall semester as a full-time student, according toWKU Student Employment Eligibility.

“It’s just a resolution to actively start a conversation regarding this so that we are eligible to work on campus,” Peter said.

The senate also voted on Bill 10-18-S, which proposed funding $300 for the Young Americans for Freedom, College Republicans and Young Democrats student organizations to host a political forum.

The bill was edited from its previous version that ended in debate due to time constraintsduring the senate meeting on Feb. 27. The previous version of this bill proposed funding $250 for the Young Americans for Freedom conservative student organization to host a seminar and recruitment event.

The bill, which was co-authored by Young Americans for Freedom President Michael Starmer and Public Relations Committee Chair William Hurst, proposed using the funds to provide advertising, food, refreshments and other associated expenses for the event, according to the bill.

Hurst said he based the food budget on the budget that was used for the SGA Campus Safety Panel, which was $249.95 according to Hurst.

“This event will show students that differing ideologies can have civil discussion and can work together for a better, more productive society,” the bill read.

Diversity and Inclusion Committee Chair Mark Clark said in a speech against the bill that he did not think the Young Democrats were very involved in the bill.

The last bill the senate voted on was to support the Big Red Rents program by funding $725. The program would be established for students to rent computer chargers, phone chargers, headphones and disinfectant wipes to keep the headphones clean. The program would take place in Jody Richards Hall, DSU Study Lounge and Helm and Cravens libraries, according to the bill, which was written by SGA senator Trevor Huffman.

The $725 would be used to purchase 12 Apple laptop chargers, 20 iPhone chargers, 10 Android chargers, 12 multi-brand computer chargers, 25 headphones and 4 containers of disinfectant wipes, according to the bill.

“After consulting constituents personally and tabling with the PR committee, we have found students have expressed an interest in this new initiative,” the bill reads.

The system would operate under a student ID checkout system where a student will exchange their student ID for a piece of equipment, and the equipment must be returned the same day, according to the bill.

Huffman said he thinks the DSU Study Lounge uses a similar system. He also said in his author speech that the desk clerk might just write the student’s 800-number down to check the equipment out.

Senator Lucas Knight asked Huffman if he knew of the general life expectancy of the equipment used for similar past programs like his.

“I don’t really have any idea of past programs or anything like that or how they’ve lasted, the materials,” Huffman said in his answer to Knight’s question. “I’m just going at this with a pilot perspective to see how it goes and then check in at the end of the semester.”

Huffman said if the equipment was damaged or broken, he would ask that the desk clerk notify their manager, and then the manager would notify him, rather than the student being charged. He said that if the students were charged for damages to the equipment, he did not think that it would be as effective.

Senator Stephen Mayer the bill was “shaky” and said he was not in favor of it.

Senator Cassidy Townsend said she was worried about the amount of funding left in the senate budget after funding the program.

“I don’t think anyone here would say that this is a bad bill,” Townsend said.

Huffman said after speaking to Administrative Vice President Kara Lowry, he decided to friendly amend the bill and remove the exact number of pieces of equipment. He said the funding would remain at $725, but the funding he would not use would return to the senate budget.

With a vote of 26 to 0, the bill passed unanimously.

The senate also nominated a new senator during its meeting. WKU advertising major Kimberly Jefferson was appointed by Dahmer. Jefferson is a member of the WKU Intercultural Student Engagement Center and is a student worker.

Dahmer had Jefferson’s responses from her application pulled up on a document for the senate to read.

“I would like to be a part of SGA because I believe the SGA is truly making a change on campus,” Jefferson wrote in her application.