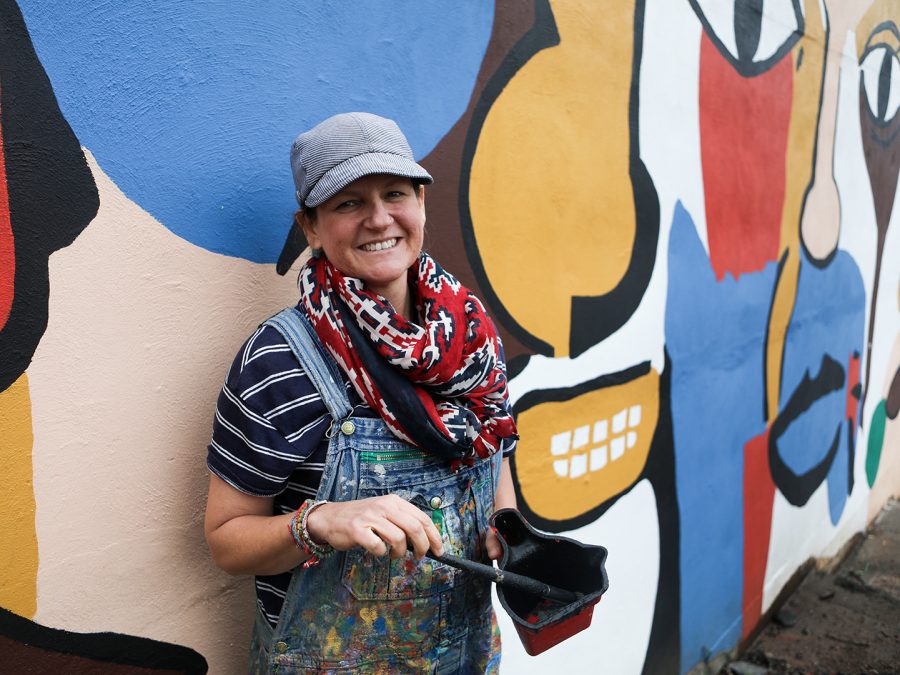 Andee Rudloff, a muralist from Bowling Green, has painted several murals on the WKU campus and around the community. Her mural behind the Gender and Woman Studies Office, pictured here, has adorned the campus for the past 12 years.

In WKU’s Center for Citizenship and Social Justice office, a bold and colorful mural surrounds the lobby. Each image in the mural represents a single word that artist Andee Rudloff picturized.

The mural is one of many that Bowling Green native Andee Rudloff has made. Rudloff became attracted to public art after realizing it was a medium that was accessible to everyone. She called the public’s relationship with street art a “heart connection.”

Rudloff said she prides herself on creating art that breaks the rules. She said her art once followed a linear pattern, but now her focus isn’t on being “perfect” but instead is on exploring people’s stories.

“Instead of art mimicking life, art is life,” she said.

Rudloff’s connection to her work goes beyond her paintbrush. She said she was drawn to projects that focus on giving people a voice. Two of her murals on WKU’s campus, one located in the CCSJ office and the other in the Gender and Women’s Studies office, tell the stories of groups that often go unheard. Giving people a voice is how she said she defines social justice.

“So many people when they hear that they think combative or argumentative,” Rudloff said. “I don’t think of it that way. I think of it as giving voice to everyone’s story. I think it’s so important.”

In her mural on the walls of the CCSJ office, Rudloff explained that it depicts 60 different ideas but still answers an overarching question. On the left-hand side, a person stands holding an American flag. Rudloff recalled her conversation with the person the painting was based on.

“This person talked about becoming an American citizen and the freedom that they felt when that happened and the connection that they felt to other people,” she said.

Julia Roberts, the executive director for the Center of Gifted Studies and The Gatton Academy, has worked with Rudloff on several projects.

“Rudloff is an outstanding professional,” Roberts said. “I always enjoy her creativity, thoughtfulness and energy.”

Rudloff channels that energy in all of her pieces. She said that she “absolutely” found her own voice through art.

Rudloff is currently partnered with SKyPAC and the Scholastic Art Exhibition. The exhibition focuses on showcasing young artists’ work. Rudloff said she felt close to the exhibition because she was once a participant.

“It made a big impact on my life because it was the first time anyone outside of my direct circle had acknowledged me as an artist,” Rudloff said. “As I started meeting the students who won the awards in the exhibition it’s been really emotional for them too because they feel like they’ve been heard. It’s just so important.”

Rudloff is also part of VSA of Kentucky, an organization dedicated to providing arts education to people of all ages with disabilities. She is currently working on turning her murals into three-dimensional pieces for the visually impaired.

Rudloff tied each aspect of art back to providing a voice to people and commented on using it as a form of expression.