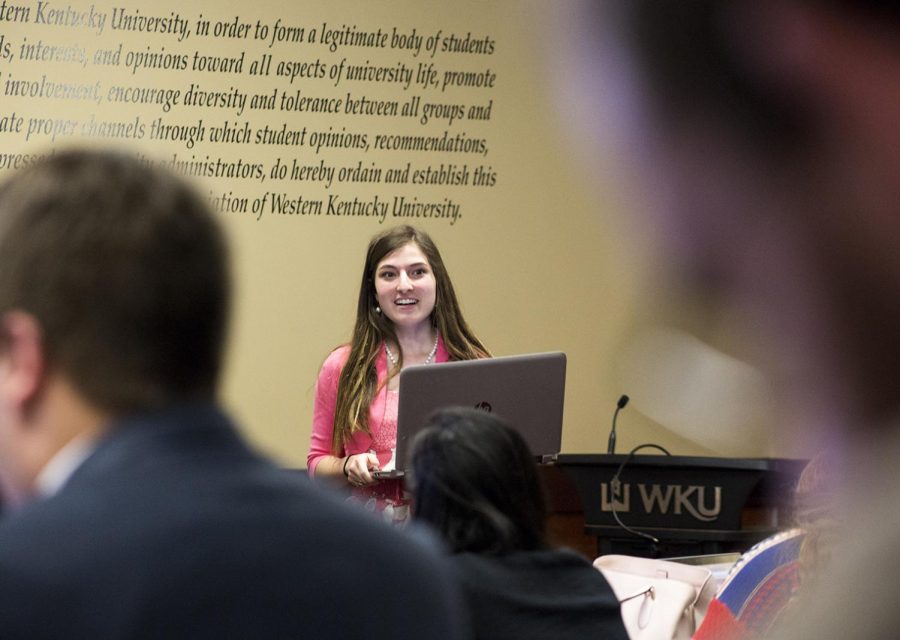 The Student Government Association has experienced growing tensions between members during the fall and spring semesters, and there is concern that the tension will become worse, several organization members have said.

There have been more than 15 constitutional amendments in the 2017-2018 fall and spring semesters, compared to about 10 from 2016 to 2017, according to the SGA Legislation Archives.

SGA President Andi Dahmer said the atmosphere during the fall 2017 and spring 2018 semesters has been different than in previous years.

“This year has become almost toxic in nature,” Dahmer said. “People do a lot to not only attack other people’s viewpoints, but issue personal attacks against individuals, and that was never part of the culture in SGA previously.”

Dahmer said the tension has developed from partisan ideologies that have been brought into the senate, although SGA is supposed to be a nonpartisan organization, making senators more divisive.

“A lot of members of SGA have been very focused on bringing each other down, and you really can’t help anyone if you’re so intent upon tearing others down,” Dahmer said. “It’s not constructive. It’s destructive.”

Senator Alex Sergent said the tension and the current environment in SGA is “not inherently bad.”

Sergent, who has been in SGA for three years, said the source of the tension comes from new senators with new ideas who are challenging a lot of the past norms, which is “something that should really be celebrated.”

There are also other opinions as to when the tension developed and peaked in the senate chambers.

Diversity and Inclusion Committee Chair Mark Clark said he thought the tension reached its peak around October and November of 2017, when SGA was discussing legislation around more “controversial” issues like Deferred Action for Childhood Arrivals, DACA.

Clark said the tension in the organization is a conflict that has many layers.

Richey said during his first term as president, he developed an application-based system to evaluate a student’s ability to contribute to SGA. He said during his second term, he focused more on appointing senators who “occupy a marginalized space at WKU so they could represent their fellow students.”

Richey said there are always concerns about senate appointments among current senators because the president “simply cannot please everyone.”

“Ultimately, while the president does have the authority to nominate a student to become a senator, it is up to the senate to confirm that nomination,” Richey said. “I believe that if a senator is going to oppose a presidential nomination, which is certainly constitutional, there must also be a clear acknowledgement of the student body president’s nomination authority.”

Lowry said the tension has manifested itself in debate over senate appointments.

“That’s been a big issue this year, trying to make sure that the senators have a say in who we are appointing,” Lowry said. “I know that people did have issues with that in the past, but it’s definitely come to light a lot more this semester.”

Dahmer said when she appoints senators, she has an application accessible to all students. After a potential appointee completes the application, Dahmer said she presents their answers to the senate.

Dahmer said she has appointed five students affiliated with the Intercultural Student Engagement Student Center, three students from the LGBTQ community, three members of traditionally underrepresented minority groups, three students in Greek organizations and five students not affiliated with Greek organizations. She said she has heard some concerns that she is appointing senators for her own gain or from too many different demographics.

“I’m actually appointing people in the most transparent way in my living memory here at WKU,” Dahmer.

Akron, Ohio, junior Francis Wilson said he followed the coverage of SGA during his semester abroad in fall 2017, and he gave a speech to SGA regarding how he felt about its current state.

Wilson said there could be many reasons why tension has developed in SGA, but he said some of the reasons could be pride and a lack of listening to one another.

“SGA has had a history of breeding and nurturing tension and conflict,” Wilson, who is a former SGA senator, said.

Like many in SGA, though, Wilson said it was not the end of the road for the organization. He said SGA needed to take a series of steps to improve, including sitting down and talking with one another and finding solutions to issues they are dealing with internally.

News reporter Nicole Ziege can be reached at 270-745-6011 and [email protected]opper.wku.edu. Follow Nicole Ziege on Twitter at @NicoleZiege.