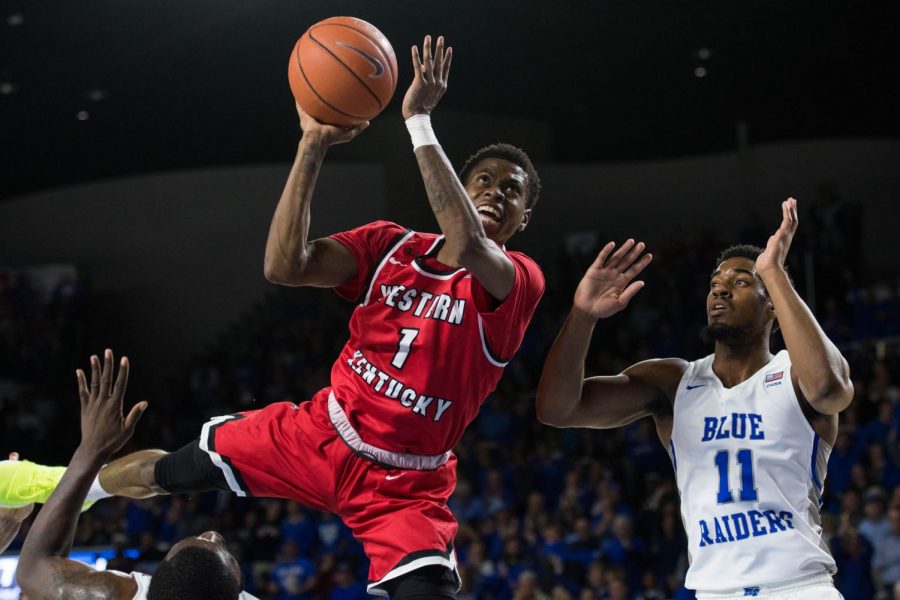 The WKU men’s basketball team had its hopes of a Conference USA regular season title blown away by rival No. 24 Middle Tennessee State University on Thursday night.

The Blue Raiders routed the Hilltoppers 82-64 in the Murphy Center to clinch the C-USA regular season title and defeat the Hilltoppers for the seventh time in the past eight meetings.

The 18-point loss is the largest loss the Hilltoppers have suffered this season. Junior guard Lamonte Bearden led all scorers with 24 points, but was one of only two scorers in double figures for WKU. Brandon Walters led MTSU with 18 points and 11 rebounds while Nick King also poured in 18 for the Blue Raiders.

“They’re a good team and a tough team,” freshman guard Taveion Hollingsworth said of MTSU. “They’ve won the conference championship two years in a row, so yeah they’re pretty good. I can tell you that we didn’t play our best, but we shouldn’t have excuses to lose like that.”

The Blue Raiders jumped out to an early 7-0 lead before Hollingsworth put the Hilltoppers on the board with a fast break jumper. Graduate transfer guard Darius Thompson’s 3-pointer with 11:34 to play in the first half tied the game at 16. MTSU’s Nick King answered with a jumper before Thompson answered with his second 3-pointer, this time from NBA range, to give the Hilltoppers their first lead.

But Thompson only scored one point outside of his two 3-pointers. The Murfreesboro, Tennessee native finished with only seven points in front of a hometown crowd.

“He never got going,” Stansbury said of Thompson. “Through the emotion of the game he just never got going. He was the one guy I thought was never in the flow all night for us.”

With the Hilltoppers holding on to a 24-22 lead, MTSU’s barrage from 3-point land began. MTSU’s Giddy Potts hit back-to-back 3-pointers to give the Blue Raiders a 28-24 lead, a lead they would not surrender for the rest of the game. The Hilltoppers got within two points before Potts and Edward Simpson hit back-to-back 3-pointers to make the score 40-32 with 1:26 to play in the first half.

Graduate transfer forward Dwight Coleby’s first field goal of the night cut the deficit to six points. After a stop, the Hilltoppers had an opportunity to nearly drain the rest of the first half and possibly take the final shot of the half. Hollingsworth’s drive and jumper hit off the rim with four seconds on the clock. King rebounded the miss and threw it to Simpson who found Antwain Johnson down the left side by the 3-point line with less than a second remaining. Johnson threw up a prayer, and the prayer was answered as his shot banked in at the buzzer to give MTSU a 43-34 halftime lead. The Blue Raiders hit seven 3-pointers in the first half.

“I thought the last four minutes of the first half was when the game got separated,” Stansbury said. “It was two, three, or four point game for most of the half. We let them hit that three before the half before the buzzer. It was just a huge play and it gave them a lot of energy.”

Potts and Brandon Walters opened the second half with a layup each to push the lead to 13 points. The Hilltoppers tried to dig into the lead, but never got closer than nine points the rest of the way. With 7:01 to play, MTSU’s Donovan Sims found King for an alley-oop dunk to make the score 66-49, causing the Murphy Center to erupt and give WKU its largest deficit of the season. Antwain Johnson’s 3-pointer with 1:15 to play pushed the lead to 20 points and was the ultimate exclamation point as the Blue Raiders would go on to win 82-64.

“We never got great rhythm in the second half,” Stansbury said. “They did a good job of keeping us from doing that. They hit timely shots and thats why they’re good. Until someone beats them, they’re the best team in this league.”

The loss drops WKU to 22-8 (14-3 C-USA) and improves MTSU to 24-5 (16-1 C-USA). The Hilltoppers conclude their season on Saturday against University of Alabama-Birmingham, which they defeated 77-69 earlier this season in Diddle Arena. With a win or an Old Dominion University loss, the Hilltoppers will clinch the number two seed in the C-USA tournament.

“This loss won’t affect us,” Hollingsworth said. “We’re going to put it behind us and hopefully see them again.”