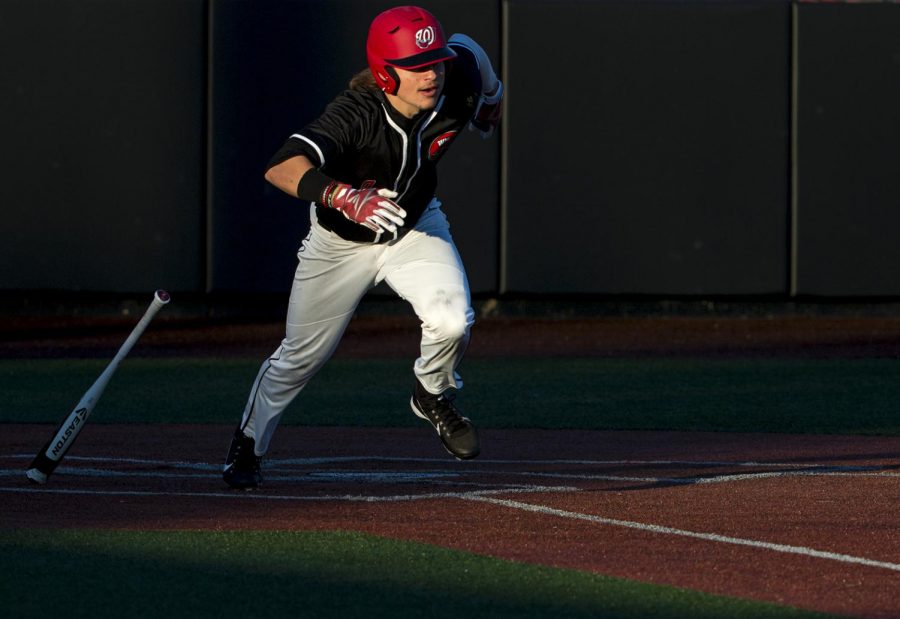 Junior outfielder Jacob Rhinesmith (2) runs to first base after hitting during the first of three games against West Virginia University on March 2 at Nick Denes Field.

WKU baseball lost two out of three games, despite solid pitching and good offensive showings from several players. WKU left too many runners on base and paid the price,

The Hilltoppers dropped to 10-10 for the season and 1-2 in Conference USA play.

“We had two one-run ball games Friday and Saturday, and it was a real test to see where our club was in the beginning stages of our conference play,” head coach John Pawlowski said after Sunday’s win. “And I thought that they responded [Sunday].”

In the first game of the series, MTSU scored two in the first inning off of senior pitcher Ryan Thurston, who recovered to throw a career-high 10 strikeouts. Thurston pitched into the eighth, a season-high in innings for him.

The Hilltoppers recovered to tie the game at two in the seventh inning after a sacrifice by junior infielder Tyler Robertson scored senior infielder Steven Kraft. But in the top of the eighth MTSU added another run off a solo homer by Aaron Aucker.

“Ryan Thurston did a great job for us today to get us deep into the game, into the eighth inning, and he was outstanding,” Pawlowski said in a press release Friday. “He kept us in the game and we had a chance to win, you can’t ask any more from your starter if he does that.”

The Hilltoppers had ample opportunity to win the game as they loaded the bases twice in the last two innings, but were unable to score both times. Throughout the game, WKU left 17 runners stranded, tied for third-most in program history, since the team’s records were first kept in 2005.

“Unfortunately we were unable to come up with a big hit,” Pawlowski said in a press release. “They did a good job, they made some pitches and plays when they needed to. Close ballgame tonight, just weren’t able to come through with a big swing.”

The offensive fireworks went off in Saturday’s game, as MTSU took a 5-1 lead through two innings. The Hilltoppers brought the score to 5-4 on a bases-clearing triple from senior left fielder Colie Currie in the bottom of the fourth.

The Blue Raiders scored a run in the fifth, sixth and eighth innings to win the game 8-7 despite another bases-clearing hit by Kraft, who extended his hitting streak to eight games. He extended that streak to nine games in Sunday’s game.

“Just seeing the ball and putting good swings on it, that’s all I can say,” Kraft said. “They’re giving me good pitches, I guess, and just don’t miss them when you get them.”

On Sunday the Hilltoppers jumped out to an early lead before MTSU scored four runs in the fourth inning to take the lead and chase off Kirkpatrick, who surrendered seven hits and five runs in his worst start of the season.

The Hilltoppers tied the score at five in the fourth and would eventually win 10-7 after a strong performance over the last four innings from senior pitcher Ben Morrison, who Pawlowski spoke highly of after the game.

“It was an amazing outing for him,” Pawlowski said. “We made the commitment that, you know, because we didn’t use him in the first two games that we were going to put him in early if we had to and see what he can do and boy, what a response came from him.”

WKU was helped by the play of junior third baseman Chase Larsen, who went 3-for-3 on Sunday and scored three runs to break out of his recent slump.

The Hilltoppers will move on to their next game, which will be Wednesday against number 15-ranked University of Louisville. The game was originally scheduled for Tuesday at the Bowling Green Ballpark, but weather concerns have caused it to be rescheduled for Wednesday at 4 p.m. at Nick Denes Field.

“That’s always a big game,” Kraft said. “You look forward to it every year, because obviously the atmosphere is always great and then we always have a lot of fans coming out so, for us, what we’ve got to do is, instead of getting caught up in the atmosphere, just stick to what we’ve been doing. Play baseball and just have fun with it.”