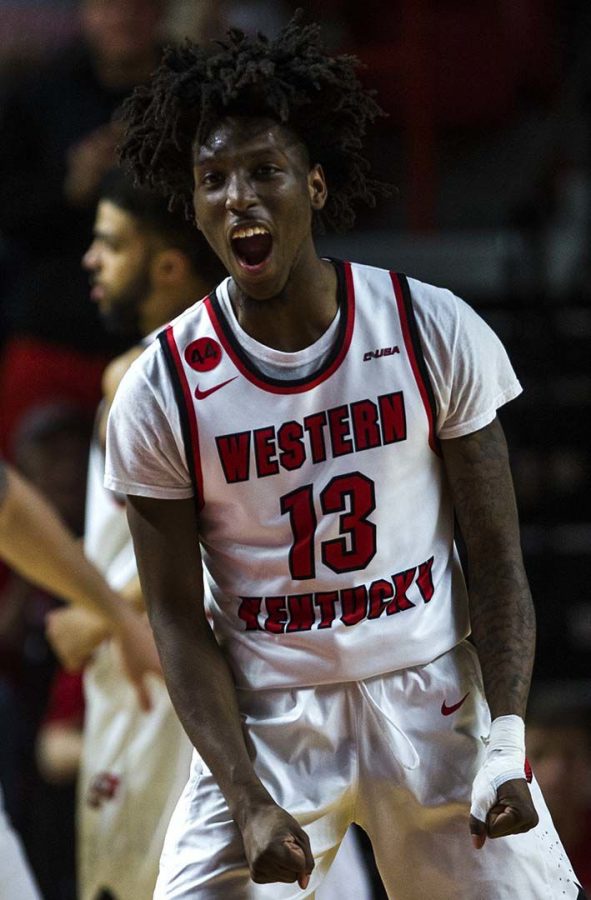 WKU freshman Taveion Hollingsworth (13) shouts in celebration after scoring during WKU’s game vs. Boston College in the first round of the NIT college basketball tournament. Hollingsworth scored 18 points during the game.

WKU basketball fell just short of the NCAA Tournament, but had success in the first round of the NIT, beating Boston College 79-62 to advance. Freshman guard Taveion Hollingsworth became the highest-scoring freshman in WKU history in the win.

This is the second win over a Power 5 opponent this season (the Hilltoppers also beat Purdue University). The win comes just three days after a 67-66 loss to Marshall in the Conference USA title game that ended WKU’s hopes of playing in the NCAA Tournament.

“Coming off a loss like that, it hurts bad,” Hollingsworth said. “But to see us come back and play the way we did is impressive. You don’t always get to play big teams like this, so we came out and left it all on the floor.”

BC jumped out to a 21-16 lead before Johnson nailed a 3-pointer to cut the deficit to two points with just 10 seconds to play in the first quarter. BC’s Ky Bowman quickly raced down the court and banked in a 3-pointer right at the buzzer to push the Eagles’ lead back to five points.

Bowman and Jerome Robinson averaged a combined 42 points per game against ACC opponents this season. The duo combined for 35 points against WKU.

“Defensively, we were really good,” head coach Rick Stansbury said. “Those two guards were 2-13 combined from the 3-point line and 14-37 from the field. That’s not easy for us to do now. This is a team that beat Duke and won nine ACC games.”

Trailing by five, freshman guard Jake Ohmer’s layup jumpstarted a quick 7-0 spurt. Hollingsworth capped off the spurt with a 3-pointer from the right corner to give WKU their first lead since the early moments of the game at 28-26. The Eagles would retake the lead at 31-30 before an 11-2 run Hilltopper run gave WKU a lead that would not be surrendered.

Thompson and Johnson both hit a pair of free throws to jumpstart the run before Thompson found Johnson for a reverse layup right before the buzzer to give WKU a 41-33 halftime lead. WKU would continue to pour it on, as junior guard Lamonte Bearden nailed a 3-pointer to open the third quarter, giving WKU its first double-digit lead at 44-33.

After BC cut the deficit to seven points, Hollingsworth and Thompson found Johnson for back-to-back slam dunks, including an alley-oop that caused Diddle Arena to erupt.

Hollingsworth would steal a pass on the ensuing Eagle possession, starting a fastbreak that would end with a Thompson dunk, giving WKU a 50-37 lead. Hollingsworth would finish the quarter with a 3-pointer at the buzzer to give the Hilltoppers a 59-44 lead headed into the fourth quarter. WKU gave up just 20 points during the second and third quarters.

BC never got closer than 10 points in the final quarter, and with 1:47 to play and trailing 72-60 the Eagles fouled Hollingsworth. The Lexington native hit both free throws to give him 462 points on the season, passing former WKU star Courtney Lee (461) for the most points ever scored by a freshman in WKU history.

“He’s just a competitor, he’s going to get out and score,” freshman guard Jake Ohmer said of Hollingsworth. “That’s just how he plays. Everybody watches him and knows he’s going to score. We see him scoring so we feel like we have to pick it up and start scoring too.”

Hollingsworth received a standing ovation as WKU would go on to defeat BC 79-62. The win improves WKU to 25-10 overall. The Hilltoppers will take on the winner of Southern California vs. UNC-Asheville in the second round of the NIT.