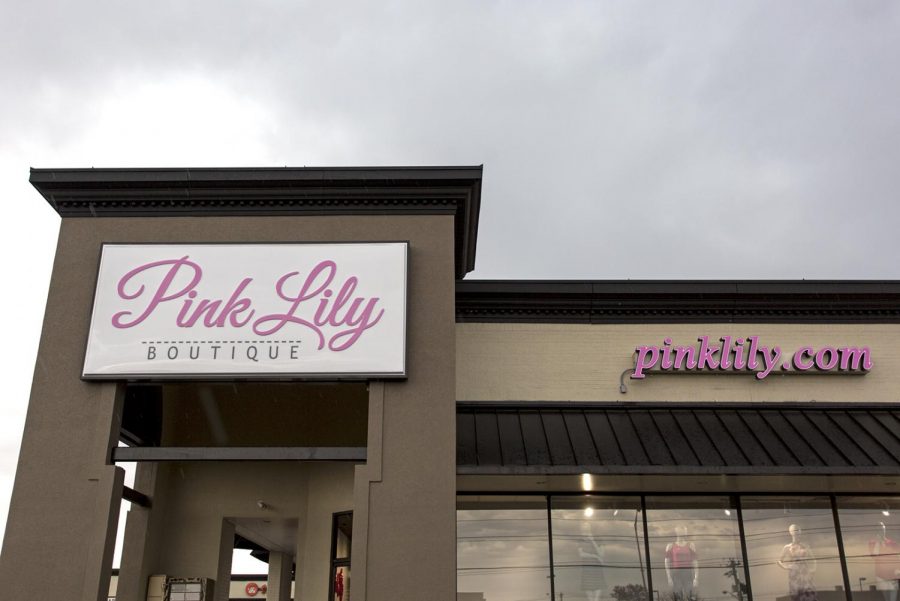 The Pink Lily Boutique, an online fashion source, started as an eBay store by WKU alumni Chris and Tori Gerbig. Seven years later the company has had over $50 million in sales and has a storefront on Scottsville Road.

The Pink Lily Boutique offers a wide range of women’s and children’s clothing including athletic, swimwear, formal attire and more. Co-owner Tori described the Pink Lily style as catering to women searching for trendy clothing that has a “bright, colorful and upbeat aesthetic.”

Pink Lily has also expanded the range of its products by adding a custom design department that offers customers the option of adding monograms or embroidery to clothing.

Pink Lily was started in 2011 as an eBay shop. Gerbig explained that when she took maternity leave, Pink Lily became a side project. After developing what she describes as a dedicated Facebook following and experiencing an increased demand for their products, the business took off.

On Jan. 1, 2014, Gerbig and her husband and co-owner Chris launched the official Pink Lily website. Soon after, Gerbig recalls the pair quitting their jobs and focusing on the boutique full time.

“Our story is one that included diving head first into the deep end of running a business,” Chris said in an email. “Along the way we learned a few things, which have greatly contributed to our success. These include ignoring the naysayers, understanding that team building takes time, continually adapting, incorporating automation when possible and accepting that this job is not ‘normal’ but rather can be unpredictable and all-consuming!”

The boutique also has a reach beyond the web with their Bowling Green shop located on Scottsville Road that was opened in the spring of 2017.

According to a Lexington Public Relations press release, Pink Lily has plans of expanding its Bowling Green fulfillment center and has plans of creating up to 56 new jobs over the next five years.

“The way we engage our followers on social media and incorporate them in things like picking out looks we bring into the shop, has been instrumental to our success,” Gerbig said in an email.

Pink Lily’s customer-focused social media presence encourages fans to share photos of themselves in Pink Lily attire to be featured on the website. The website also includes a blog, The Lily Pad, that gives fashion advice and helps readers plan outfits.

Gerbig attributed customer satisfaction as a key part in entrepreneurship.

“As an entrepreneur you must listen to your customers,” she said in the same email. “Don’t get too comfortable in your success. Always be willing to improve, change or adapt as needed. Keep reaching for the next goal when you achieve your first one.”

The Pink Lily Instagram has reached over 300,000 followers, and its daily posts include promotional offers and showcases their new products.

According to the press release, the company ships more than 1,000 orders a day and has delivered more than 1.5 million products since its opening in 2014.

Chris explained that he and Tori often bounce new business ideas off of each other. In his email, he said that daily questions they consider have to do with outsourcing, investments and expansions.

“We have always had big plans for Pink Lily, but it continues to surpass our greatest goals,” Tori said in an email. “It has always been a dream of mine to have a well-known brand and I’m thankful for all we have achieved and for our amazing customers, employees, family and friends who have supported our work.”