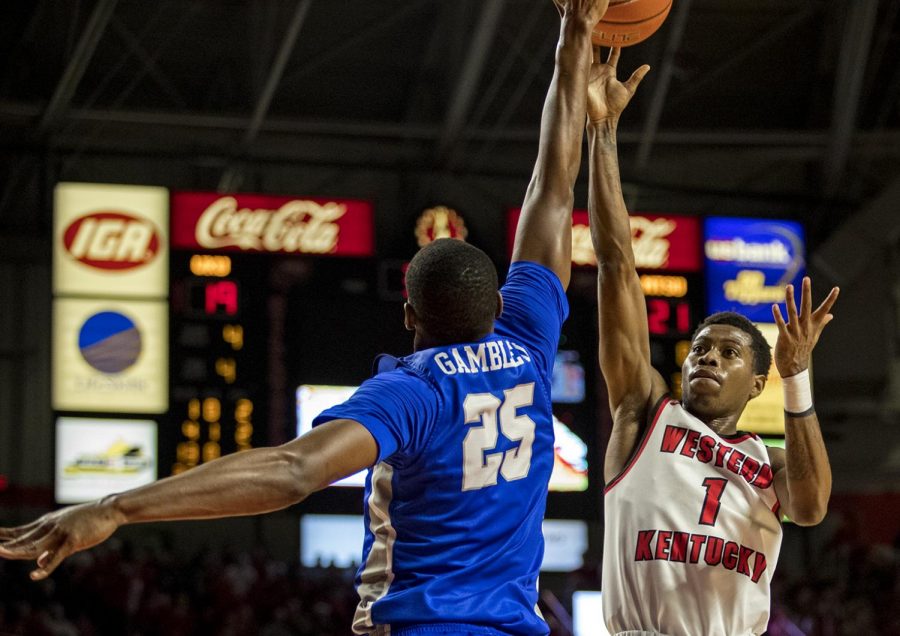 With two games remaining in the season, a lot is at stake for the WKU men’s basketball team. With a win in each of the team’s final two games, the Hilltoppers (22-7, 14-2 Conference USA) could potentially win the C-USA regular season title as well as lock up the No. 1 seed in the C-USA tournament. WKU hasn’t done either since joining C-USA.

But everyone knows to be the champion, you have to beat the champion. That’s exactly what the Hilltoppers will try to do Thursday night when they travel to Murfreesboro, Tennessee, to take on No. 24 Middle Tennessee State University. The Blue Raiders (23-5, 15-1 C-USA) have represented C-USA in the NCAA Tournament the past two seasons and will look to defeat WKU for the sixth time in the last seven meetings.

“This is the way its supposed to be,” head coach Rick Stansbury said. “When I first took this job I didn’t quite understand when people talked about Middle being a rival. Well a rivalry isn’t us going to their court last year and the stadium is a one-third full. That’s not a rivalry. A rivalry is when you go on the road and that gym its packed. That’s what a real rivalry is, playing a meaningful game this time of the year.”

Thompson mentioned that MTSU head coach Kermit Davis began recruiting him while he was a sophomore in high school, but he decided to attend Tennessee instead. The Murfreesboro, Tennessee native will likely need to put on a stellar performance in his hometown if he wants to lead the Hilltoppers to victory.

MTSU forward Nick King leads the Blue Raiders with 21.5 PPG and is in the running for C-USA Player of the Year. In the first matchup, King had a player of the year type game by leading all scorers with 28 points. King hit several shots with the shot clock winding down, including a huge 3-pointer with 3:43 to play to give the Blue Raiders a six point lead.

Senior forward Justin Johnson got the task of guarding the 6’7″ forward in the first matchup and will likely be asked to do the same in round two.

“I don’t think I’m going to do too much differently,” Johnson said. “I’m going to guard him the same and take on the task again. He hit some tough shots from deep with the shot clock running down. I’m not going to change anything I do, I’ll approach it the same way and we’ll see what happens.”

With a win, it would be WKU’s first true road win over a ranked opponent since they defeated No. 4 Kentucky in 2004. A win would also make it the first time WKU defeated two ranked teams in a season since 1993. The Hilltoppers and Blue Raiders tip off at 7 p.m. on Thursday in the Murphy Center.

“I have no doubt our guys believe we have an opportunity to win,” Stansbury said. “Will we be good enough? We will find out real soon. But if not, it won’t be because our guys don’t believe.”