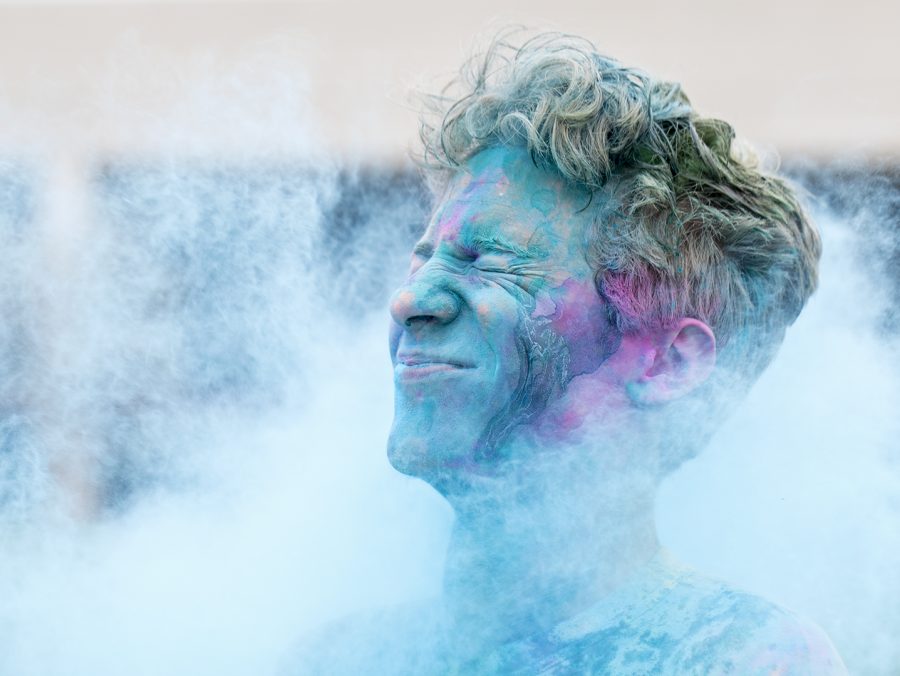 Conner Hounshell braces himself as a friend throws colored powered at him during Holi Festival which took place on South Lawn on Sunday. Holi is a celebration of spring and is known as the festival of color.

Traditionally known as the “festival of colors” in India, said ISA president and graduate student in computer science Lakshmi Devulapalli, students celebrated Holi by playing games, dancing and splashing over 112 pounds of organic color powder around while traditional Indian music provided by a DJ played.

Devulapalli, who was born in the Telangana state of India, said the holiday is celebrated in India around the first day of spring as a means of hope for a good harvest and to “add color to your life.” Since first celebrating the event at WKU in 2010, ISA’s main goal in sharing Holi is to support campus diversity.

“The main importance of this event is unity and diversity,” Devulapalli said. “Just like colors, everyone is equal.”

ISA Information Technology (IT) head Chandra Polavarapu, also a graduate student in computer science born in the Telangana state, said the event is a great way to introduce Indian students and culture to WKU.

Consisting of 30 to 40 members, members of ISA are able to maintain a tie to India and its culture through the Holi event at WKU, according to Polavarapu.

“We are not at home, and we have to make it home,” Polavarapu said. “We take every opportunity to do that.”

La Grange, Kentucky, sophomore and SGA chief of staff Conner Hounshell helped write legislation to have SGA co-sponsor and fund the event. By separating funding into two separate budgets of around $450 from the SGA Executive Board and the SGA Senate, a total of around $900 was used to pay for organic color powder, a live DJ and water bottles provided at the event, Hounshell said.

Hounshell said that he believes the Holi event was an opportunity to integrate American and international students in an interesting way.

“I think our role is to fund events that enhance the campus,” Hounshell said, referring to SGA. “This specific event was something exciting to sponsor, to have domestic students exposed to international culture.”

Hounshell said that he believes such exposure is necessary to maintaining a diverse campus.

“A lot of times, there’s not a lot of opportunities for international students and domestic students to interact,” Hounshell said. “Partnerships with the international organizations on campus is very important.”

SGA president and junior Andi Dahmer said that she believes an event like Holi reveals the potential for American and international students at WKU to participate in a shared WKU experience.

“It really shows how we can come together as a WKU student family,” Dahmer said.

Intramural and logistics head of ISA and SGA director of IT Smita Peter, a graduate student in computer science, was born in the Maharashtra state of India. Peter said she is thankful for SGA’s and American students’ involvement in Holi at WKU.

“They do not hesitate to celebrate it,” Peter said. “It means a lot.”