Debate sparked in SGA over funding for LGBTQ ceremony 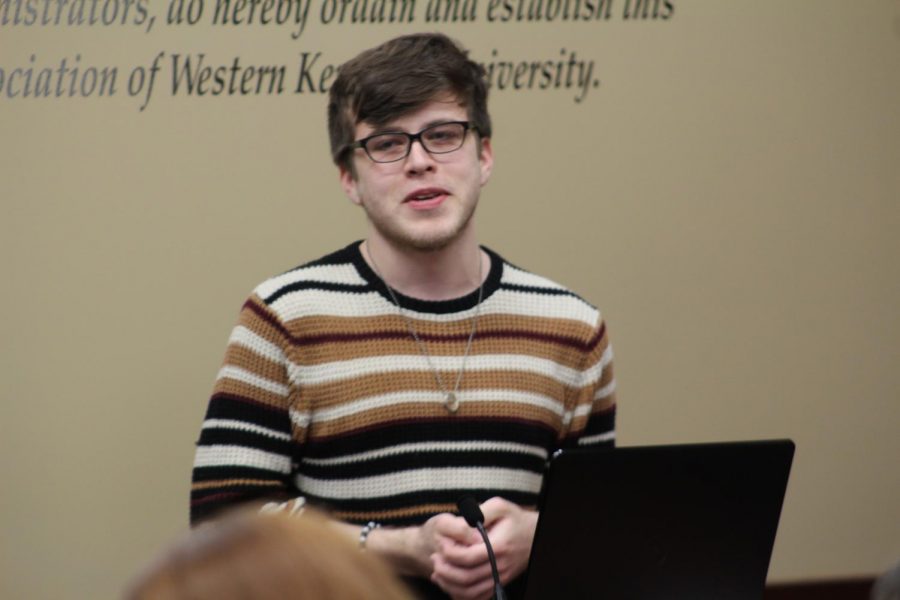 Discussion broke out in the Student Government Association meeting last night when a senator cited his belief in the Bible as the reason he voted against giving funds to the Lavender Recognition Ceremony, an event that celebrates LGBTQ graduates.

At the previous SGA meeting on Mar. 20, the Senate voted by 28-5 to give $250 to the event to purchase stoles. Before voting, Senator Dallas McKinney gave a short speech against the bill but did not specify his reasoning.

During the meeting, McKinney spoke to the Senate and explained why he had voted against the bill. He said he believes in “a certain interpretation of the King James Bible,” which determines how he votes.

“I hope you’ll accept me in my beliefs because I’m not going to change,” McKinney said. “On issues we disagree on, I hope we can agree to disagree.”

During his speech, McKinney also read several Bible verses from the book of Romans. As McKinney was speaking, Queer Student Union President Jeremy McFarland stood and walked out of the chambers. McFarland had been one of several student speakers who spoke before McKinney about misconceptions connected to the LGBTQ community. McFarland specifically spoke about funding for the Lavender Recognition Ceremony.

Senator Kenan Mujkanovic spoke after McKinney and said the senators needed to learn how to love each other.

“What hurt me the most sitting there during the meeting last week was seeing people smirking and making faces at [McKinney] when he was sharing his views,” Mujkanovic said. “I don’t agree with [McKinney], but I can respect his views.”

Senators Noah Moore and Olivia Simpson each gave speeches as well. Although they did not explicitly say McKinney’s name, they condemned voting for the best interest of WKU based on the Bible.

Simpson said there was “nothing in the Bible that says you shouldn’t love everyone.”

“What benefits our student body is safety,” Simpson said, regarding making the campus safer for LGBTQ students.

The first bill proposed amending the process by which committee chairs were appointed. Rather than the SGA president appointing the committee chairs with a two-thirds vote of approval by the Senate, the speaker of the Senate would appoint committee chairs. The change would limit the amount of power given to the executive branch, according to the bill.

Speaker of the Senate Ryan Richardson said he did not support transferring that power to his position.

“It does not make sense for me to have that power,” Richardson said. “I 100 percent do not support this bill.”

Senator Alex Sergent said he was having a difficult time with the bill.

“On one hand, outreach is incredibly important for our community, but if we give one seat to a specific organization, when does it end?” Sergent said in a speech against the bill.

“I feel that we do fail marginalized communities,” Jones said.

With a vote of 25-2 and one abstention, the bill passed.

The Senate also voted unanimously to fund $500 for “Take Back the Night,” a march and rally held to protest violence against women. The money would be used for purchasing shirts for those who participated in the event. “Take Back the Night” will take place on April 26.