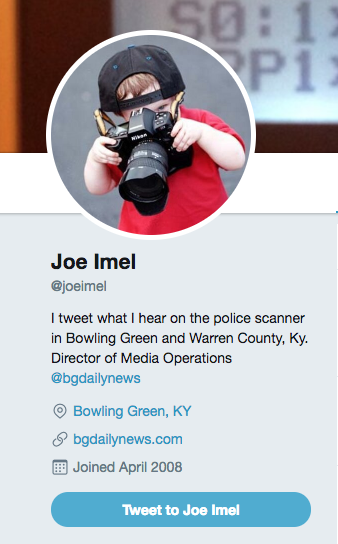 Joe Imel, 53, has called Kentucky home for almost 40 years, and though he has worked in the newspaper business for decades, he has never lost his deep passion for storytelling.

Imel was born in Columbus, Ohio, but his younger years were spent wherever his father was stationed, including stops in California, Pennsylvania and a six-year stay in Germany. Imel’s father was a career military officer, and Imel said growing up as an “army brat” made him into the man he is today.

“I had a real solid upbringing,” he said. “In the army, all different races, creeds and religions were kind of thrown together. It was a great experience, and I think that my exposure to different cultures and ways of life helped shape me.”

Imel’s parents were devout Catholics, and he attended mostly Catholic schools before his family moved to Fort Knox in 1979. Imel attended Fort Knox High School, where he wrestled, played football and was the yearbook photographer. He graduated in 1984 and decided to attend WKU, which is where he discovered his calling.

“I came to WKU in 1984 to be an art teacher and a football coach,” Imel said. “That fell through because I was a poor student and I partied like a rock star, but while I was there I fell in love with photojournalism. I found my passion in life and the thing that propelled me forward. I could never thank WKU enough for providing that for me.”

In 1988, Imel decided to leave WKU despite the fact he was not far off from getting his degree. Imel said once he discovered photography, he wanted to go out and try it. It was not long before Imel secured a job with a weekly paper in McLean County, which gave him his start in the industry.

“A fraternity brother of mine was the editor of the paper, but it was kind of a misnomer since he was the only reporter,” he said. “Most weekly papers in the ’80s would hire a reporter and give them a camera, but they hired a photojournalist and taught him to write. So, I’d shoot pictures, but then I’d come back and I’d pray to anybody that would listen for words to appear because I struggled to write.”

After several years of working at newspapers around Kentucky, Imel said the Bowling Green Daily News hired him in 1992. He started out as the paper’s only staff photographer, but he rose through the ranks and eventually assumed his current role as the director of media operations.

“I’m a little bit of a hybrid because I have my foot in the newsroom, but also in every other department,” he said. “I oversee print, digital and mobile. My job is to digitize a legacy product and make sure that we’re taking advantage of the technology out there today for newspapers.”

In addition to his work at the Daily News, Imel has also taught basic photography courses as adjunct faculty at WKU in the past. Imel said issues with WKU accreditation in the ‘90s made him want to finish the classes he needed to get his degree, but his busy schedule did not allow him to finish.

James Kenney, the coordinator of WKU’s photojournalism program, once had Imel as a student in one of his classes. Kenney and Imel have been friends since their days as co-workers at WKU, and Kenney said over the years he has learned a lot more from Imel than he ever taught him in class.

“One time I was at the Daily News doing caption information for a project that they printed of mine, and I noticed everybody was going to Joe,” Kenney said. “I realized then that he was really the go-to person. He’s so much a part of the community, and he’s a great guy on top of being a passionate journalist.”

Imel said back when his primary job was shooting photos, spot news was his favorite thing to photograph. Imel did not wish for fires or wrecks to happen, but he made a habit of listening to a police scanner so he could be alerted whenever they occurred.

“The police scanner has always been my favorite tool for spot news,” Imel said. “It’s not the police or fire department’s job to tell you, ‘Oh hey, we’re headed to a fire.’ A scanner is really great for any newspaper person, and if you listen long enough you hear things put together that are hilarious.”

Overheard on the scanner, dispatch to officer “Subject is intoxicated and naked.” I wish I heard the rest of this call as it sounded like the dispatcher was trying to hold back a laugh.

Caller reports that his tax preparer just punched him in the face. BGPD dispatched.

In 2008, Imel created a Twitter account and quickly realized he did not want to be another person sharing meaningless status updates. Imel said he was unsure how to utilize the platform until he decided to start tweeting out what he heard while listening to his police scanner.

“I decided that the stuff I heard was un-news, which is not what we report at the paper, but it’s the news that is the fabric of our community,” he said. “At first, I really wanted my tweets to show people how often resources are wasted on low-level incidents, but there’s a little more levity to them now.”

The @joeimel Twitter account currently has 48.4K followers, but it started from very humble beginnings. At first, Imel did not have many followers, but eventually word got around and his numbers grew exponentially. Imel has gotten so popular, he said he cannot go anywhere without being recognized.

Animal incident on Potter Ave. Caller reports a chicken is chasing her daughter.

Report of a subject with a weapon. A white male, wearing a red helmet and riding a bicycle, is waving a machete around. Last seen in the 1000 block of the 31W Bypass.

“There’s a lot of people that have more followers than me, but I have a lot of followers in this area,” he said. “It’s cool because every time I’m sitting down someplace I have somebody stop and talk to me. I think the account has really taken on a life of its own because people can identify with it.”

Imel said he never editorializes his tweets because his purpose is to report facts, not indict people. His followers appreciate funny tweets just as much as they do serious ones, but Imel said his Twitter picture, which features a child holding a camera and not a photo of him, often raises questions.

“The avatar is a picture of my son Zach when he was three years old,” Imel said. “I used to take my son to a lot of my news assignments, and one time he picked up a camera and mimicked what I was doing. I whirled around and snapped a frame of him, and it’s still my favorite photo.”

To Imel, the best part about his Twitter account is the crowdsourcing effect it has had in the community. He said his account has helped find dozens of lost pets, which serves as an example of how valuable it is for people to be able to share information with one another in real time.

Report of a black lab that is running in and out of traffic at Fairview Ave. and Hampton Ave.

“I love that people are engaged and paying attention to what’s going on,” he said. “If I tweet about something, somebody is nearby, and they’ll send a photo. My followers will let me know what’s happening, and then others can add to that, which just makes for good healthy discourse.”

Without the support of the Bowling Green Daily News, Imel said his Twitter page would not exist. His job allows him to put in the time necessary for running his page, and he said he plans on continuing for the foreseeable future since he sees his account as a service the paper provides.

“At first, I didn’t brand my account as the Daily News because it was just a little on the edge of what newspapers really do,” he said. “The owners of the paper have been great about understanding that we’re trying to reach people in a different way. I direct people back to our website by pushing out links and hoping that people will click them. I really want people to delve deeper than just what I tweet.”

Imel is always trying to figure the next step he can take to help the paper be ahead of the curve. However, Imel said the one thing that will always remain constant is the necessity of factual reporting.

“The newspaper business is all about information, and I think a lot of people are misinformed,” he said. “The most important thing is to be informed, but I run across so many people that don’t know what’s happening when there’s so many ways to find out. It’s a tough landscape, but I’m sticking with it for the long haul.”