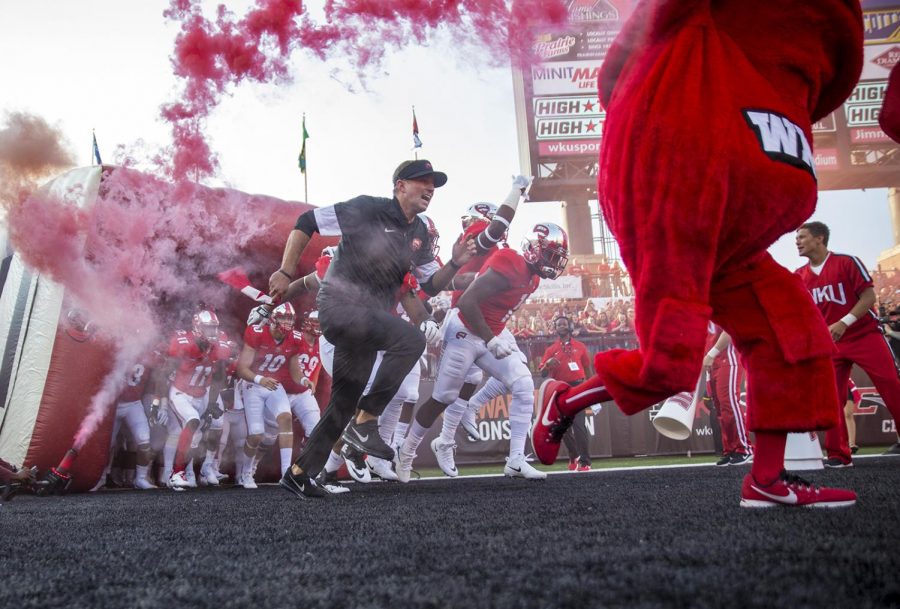 Head coach Mike Sanford leads the team out of the tunnel at the start of the first half of the WKU - EKU football game on Saturday, Sept. 2 at Houchens-Smith Stadium.

Former University of Kentucky linebacker Eli Brown is coming home. Brown announced via Twitter on Saturday afternoon that he will be transferring to WKU.

Brown starred at nearby Warren East High School, where he played both running back and linebacker. During his senior season at Warren East, Brown was named first team all-state by the Courier-Journal and the Associated Press. He was also picked for the U.S. Army All-American Bowl, arguably the most prestigious high school football all-star game in the nation. As a four-star recruit, the Bowling Green native was offered a spot by WKU, but ultimately committed to UK over WKU, Ohio State University, Ole Miss, Penn State University, University of Louisville and Vanderbilt University.

Brown redshirted his freshman year at UK before seeing the field sparingly in year two in Lexington. As a redshirt sophomore this past season, Brown saw his role increase when original starter Jordan Jones injured his shoulder, throwing the former WKU recruit into the starting lineup for five games. Brown recorded 38 tackles, including two tackles for loss in 2017-18 while helping the Wildcats to their second consecutive bowl game.