Hilltoppers blown out by UAB 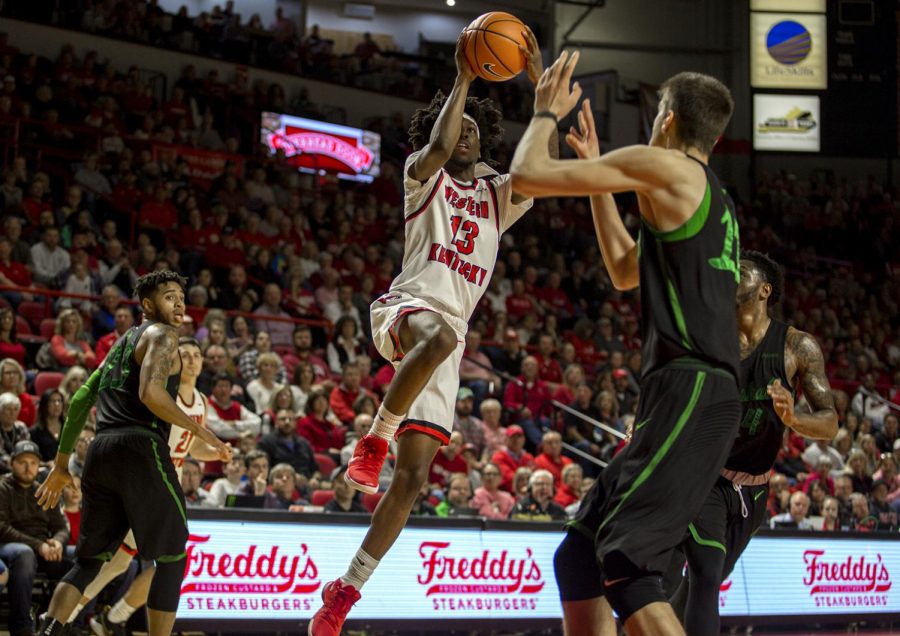 Taveion Hollingsworth, WKU guard, goes up for a shot against Marshall University. WKU won with a final score of 85 to 74.

What was expected to be a Conference USA showdown ended up being a lopsided blowout. The Hilltoppers were handed a 28 point loss, their largest loss of the season, to the hands of University of Alabama-Birmingham on the road Saturday night.

Senior forward Justin Johnson scored 18 points and grabbed 11 rebounds to record the game’s only double-double, but it wasn’t enough as the Blazers hit 15 3-pointers on their senior night to record a 101-73 victory over WKU. The 101 points are the most WKU has given up all season.

“It’s embarrassing when you come out and play like that when you know how you good you can be,” Johnson said in a radio post-game interview. “Coach told us before the game that if we weren’t ready they would punch us in the mouth. That’s what happened. It was their senior night, emotions were flying. You saw how good we were on our senior night. The team we’re capable of being didn’t show up tonight. They beat us in every aspect of the game.”

After Johnson and UAB’s Chris Cokley traded the first buckets of the game, the Blazers began their barrage from 3-point land. UAB’s William Lee and Nick Norton hit back to back 3-pointers to give the Blazers an early lead that would never be surrendered. UAB hit its first five 3-pointers to get a 27-15 lead with 11:01 to play in the first half. The Blazers finished 15-25 from 3-point range.

“They did exactly what we were hoping they wouldn’t do, shoot the cover off it,” head coach Rick Stansbury said. “They shot the cover off the ball tonight. Give them credit, they played well.”

Freshman guard Jake Ohmer’s 3-pointer with 8:42 left in the first half cut the deficit to eight points. The two teams would trade buckets the rest of the half as the Blazers would enter halftime with a 45-37 lead.

Johnson’s jumper with 18:29 to play would cut the deficit to four points, and that’s as close as WKU would get the rest of the way. UAB’s Chris Cokley would answer with a layup that would ignite a 13-0 run to push the lead to 17 points. From that point on, the Hilltoppers never gained any momentum to dig into the deficit.

The Blazers would stretch their lead out to as many as 31 points en route to a 101-73 victory.

WKU concludes the regular season with a record of 22-9 (14-4 C-USA) and will receive a bye in the first round of the C-USA basketball tournament. The Hilltoppers and Blazers will meet in the second round if UAB defeats Florida Atlantic University in the first round.

“I told our guys ‘after this one’s over we have to take a long look in the mirror and check ourselves,’” Johnson said. “That includes myself. We know we have to be better than that because if we play like that next game, the season is over.”

WKU will play either UAB or Florida Atlantic in the second round of the C-USA tournament on Thursday night in Frisco, Texas. Tip-off is scheduled for 9 p.m.