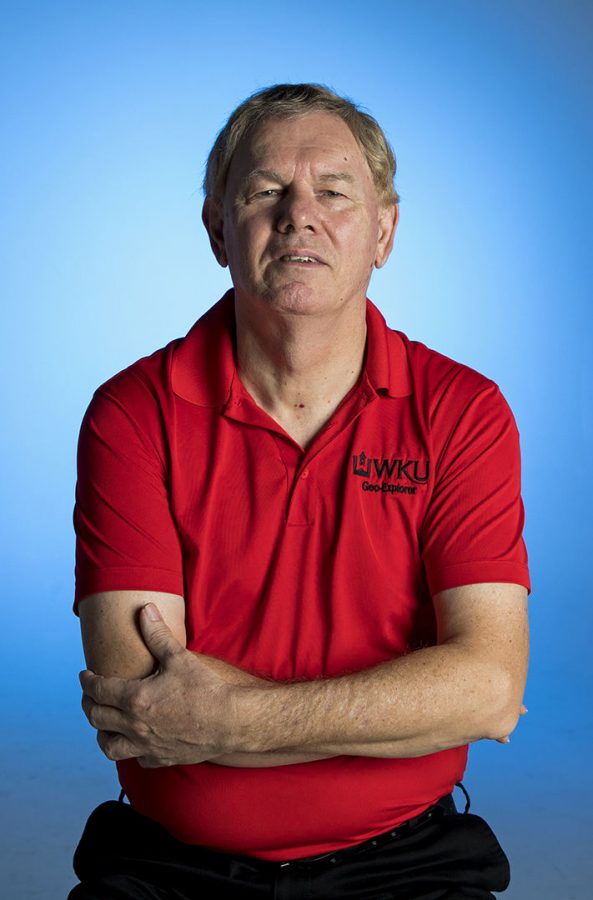 David J. Keeling is a distinguished professor of geography and has been on about 30 expeditions in the past 25 years with WKU. "Everything around us is geography," Keeling said. "Understanding the why of where, the way you are and the resources you have, the climate, the culture all of those things have an impact on the local community. Geographers can do anything." Keeling's next expeditions is in June where he will be visiting countries such as Siberia, Baltic states, Iceland and Greenland to understand the climate change in those areas.

A WKU geography professor returned earlier this semester from leading a 30,000-mile educational expedition where he spoke about sustainability.

Over the course of three weeks, David Keeling, distinguished professor of geography, spoke on sustainability issues in Japan, the Maldives, Rwanda, Morocco, Brazil and the Galapagos Islands. This journey was not Keeling’s first time traveling all around the world. As of October 2017, the Cheltenham, England, native has traveled over 3.1 million miles to over 185 countries, according to his website.

This most recent trip was through TCS World Travel, a luxury travel company where he works as an enrichment specialist on political and economic social geography. He led a group of clients on the trip where he spoke to them about demographic challenges in Japan, ecotourism in Maldives, reduced plastic consumption in Rwanda, culture in Morocco, urban development in Brazil and ecology in the Galapagos Islands.

“When we go to the Maldives for example, in the Indian Ocean, the highest point on average is 3 feet above sea level,” Keeling said. “If the average sea level rise over the next 50 years is going to be 5 feet, well, you can see there’s a problem.”

“There are a lot of really good examples of sustainable management practices,” Keeling said. “Scandinavian countries that we visit that have really done well in addressing issues like alternative energy. But when you balance that out against the bigger issues — climate change, population growth, rampant capitalism that creates problems, consumerism, plastic use around the world- every place has got a challenge.”

For the United States, Keeling believes climate change is the greatest challenge and will affect every person in the country.

“When you think about all of the things that changing climates impact — whether it’s changing agricultural zones, excessive flooding, rain events that are not typical historically, the increased intensity of hurricanes that we saw last year with [Hurricane] Harvey and what came through the carribean, sea level rise — that ultimately won’t affect us in our lifetimes,” Keeling said. “But 50 or 60 or 80 or 100 years down the road, will Florida exist? Will New Orleans be underwater?”

Despite the enormity of climate change, Keeling said individuals can have a positive impact.

“There are lots and lots and lots of things that students can do in the local community that can have an impact on their own health and on the health of the environment and the community,” Keeling said. “Those are the same themes that I talk about to these groups when I go on these expeditions. It does take a village, and it does take one person to get others involved.”