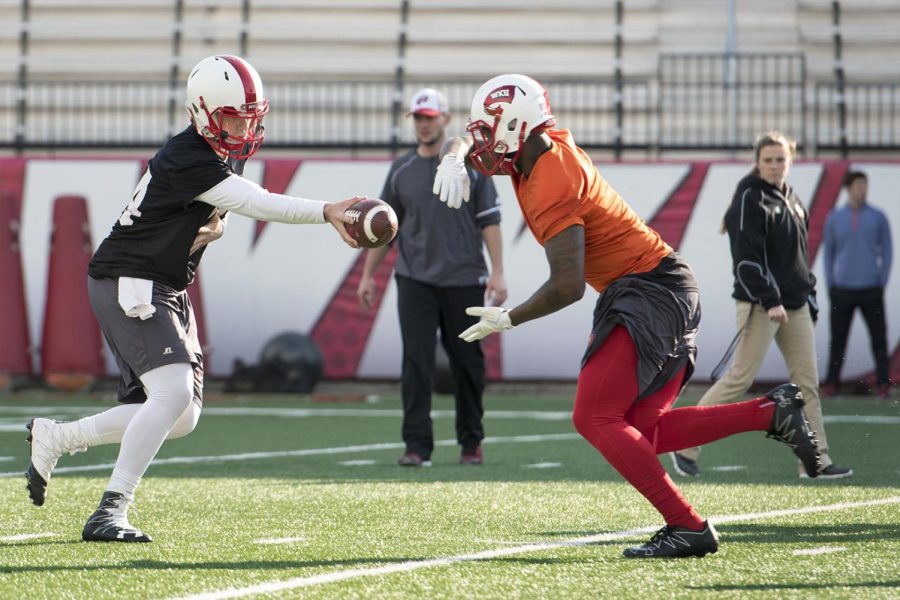 Junior quarterback Mike White (14) hands the ball off during Western's first football practice of the spring on Thursday, March 23, 2017. Players participated in both team and individual drills in their first practice leading up to the Fall 2017 season.

In order to do that, the Hilltoppers will have plenty of questions to answer in Mike Sanford’s second year as head coach.

With White at the helm, WKU threw for more yards than any other team in Conference USA in 2017, which placed him third in the country in passing yards for the season. The Hilltoppers also featured the third-most efficient passing offense in the conference.

With White graduating and entering the NFL Draft, the battle to be his replacement starts in spring practice. The team had five other quarterbacks listed on the roster last season. Only two of those have had any experience at quarterback for WKU.

The most experienced is Drew Eckels, who will be a redshirt senior next season. In his WKU career, he has thrown for 214 yards and two touchdowns and completed 15-of-24 passes. He has appeared in 17 games. He was also involved in the quarterback battle to determine who would replace former Hilltopper and current Miami Dolphins quarterback Brandon Doughty, which White won.

Steven Duncan, who will be a redshirt sophomore next season, has also made one appearance for the Hilltoppers. He completed two passes against UNC-Charlotte last season.

While he won’t be competing in spring football, another option at quarterback could end up being Kevaris Thomas, a member of WKU’s 2018 signing class, and the first four-star recruit in program history.

There is also concern about WKU’s rushing attack, but for different reasons. The Hilltoppers struggled to run the ball all season in 2017. They finished dead last in rushing offense nationwide last season, putting up just 791 total rushing yards. WKU was also the only Division I FBS team to not have a single 20-yard rushing play all season.

De’Andre Ferby will be returning for his final season of eligibility as a redshirt senior. After returning from injury for the 2017 season, Ferby played in 11 games but totaled just 373 rushing yards. He was still the Hilltoppers’ leading rusher last season, and will likely be the team’s top running back next year.

With the Hilltoppers going through a youth movement between last year and this year, there’s also the question of which young players will emerge and fight for playing time this season.

Last year, 11 true freshmen got playing time, and 24 players got their first career start. The Hilltoppers will be looking for emerging young talents like Devon Key, a defensive back who recorded 94 total tackles, three passes defended and one interception. Those number earned him C-USA All-Freshman honors last year in his redshirt freshman season.

WKU will have 14 spring practices this year, which will lead up to the annual Red vs. White Spring Game on April 21.