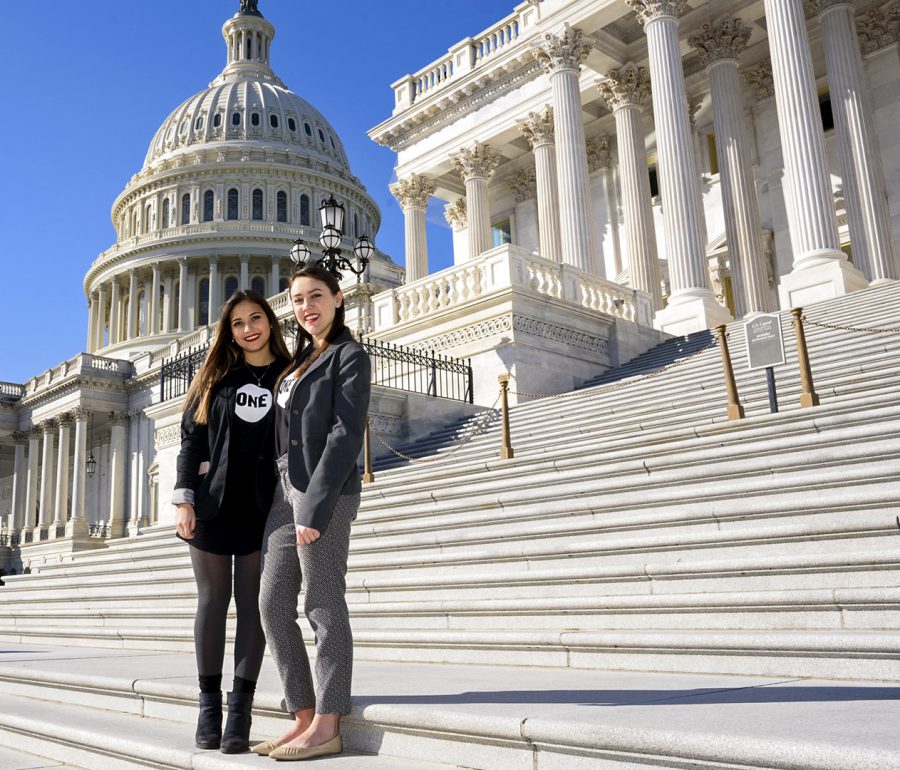 Bowling Green junior Nicole Camargo and La Grange junior Amanda Collins traveled to Washington, D.C. the last week of February to meet with legislators to discuss the international affairs budget. The two students are part of WKU’s ONE Campus group.

Nicole Camargo has been interested in political advocacy for many years. When she came to WKU, she used that passion to help start ONE Campus, a national organization for college students dedicated to fighting poverty. A few weeks ago, the Bowling Green junior put that passion into action once again when she travelled with the group to Washington, D.C., to advocate for funding for the United States’ international affairs budget.

“This is a democracy,” Camargo said about the necessity of advocating. “And the people matter.”

Camargo was joined on the trip by fellow club-member Amanda Collins, a La Grange junior. This was their second trip to Washington, D.C., with the group.

The trip was part of the ONE Campaign’s yearly Power Submit, according to a press release. The summit brings volunteers from global organizations for training on advocating for the fight against poverty and preventable diseases. The three-day summit took place from Feb. 24 to Feb. 26, according to the release.

Collins said during the summit, they joined together with other ONE Campus groups from around the country to learn how to successfully advocate.

“They kind of trained us on the best way to use our voice to talk to the community and the legislators,” Collins said.

Cutting the international affairs budget would reduce the funding to a level not seen since the Sept. 11 terrorist attacks on the World Trade Center, according to the U.S. Global Leadership Coalition. The U.S. provides foreign assistance to over 100 countries to encourage economic growth, spread democracy, improve health, promote peace and provide education, according to the Department of State.

Collins said the advocates with ONE did not meet with the actual legislators, but the staff members took notes and asked questions to collect information that would be passed on to the legislators.

Collins said the group was able to spread the message about the fight against poverty and the necessity of the international affairs budget beyond just the legislative staff. She said lobbyists talked to the students as they walked to the U.S. Capitol about the students’ advocacy.

“Even if it doesn’t reach the senators, it reached other people,” Collins said.

Camargo said she enjoys advocating, and protecting the international affairs budget should appeal to all political parties.

A few days after their return to Bowling Green, the two students tabled an event for ONE Campus on the first floor of Downing Student Union. Camargo and Collins, with the help of two other students, asked students to sign pre-written letters to U.S. Sen. Rand Paul. Collins said the letters would be taken to Paul’s Bowling Green office. She said they wanted to give as many letters as possible to the senator.

News reporter Emma Collins can be reached at 270-745-6291 and [email protected] Follow Emma on Twitter at @_mccain_emma_.