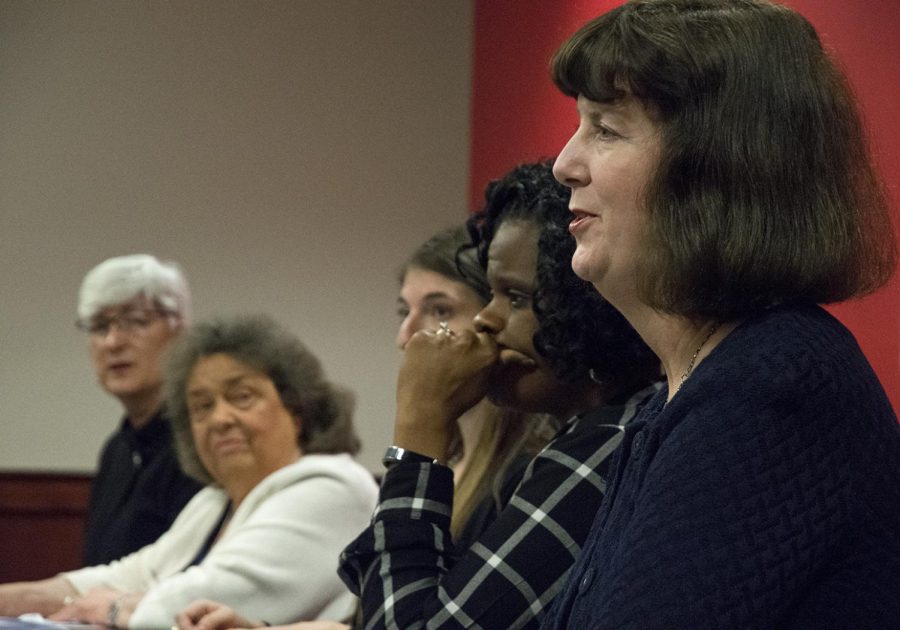 History professor Patricia Minter addresses the audience of the Women in Leadership panel hosted by the Student Government Association in Downing Student Union on Monday. Minter is a former faculty regent and is also running for Kentucky state legislature.

The Student Government Association hosted its first forum focused on women in leadership on Monday night.

The panel discussed challenges they have faced during their careers, how to balance personal and professional lives and the advice they would give to female students who aspire to take on leadership roles.

“The psychic energy it takes to deal with that garbage, frankly, day in and day out is exhausting,” Minter said, regarding the structural challenges she has faced during her career, including assumptions made about her and other female professors and misogyny in the workplace.

“We think anyone can benefit from that conversation,” Wyer said.

Wyer said the panel was also a good opportunity for students to reach out to the panelists after the event.

“It’s important to talk about the issues that they are potentially going to face,” Wyer said.

“I thought it’d be really interesting to come out and learn something,” Edmonds said.

Hopkinsville sophomore Katie Thomason said she heard about the panel from Edmonds and decided to attend.

“I want to help contribute to that,” Thomason said, regarding women’s empowerment.