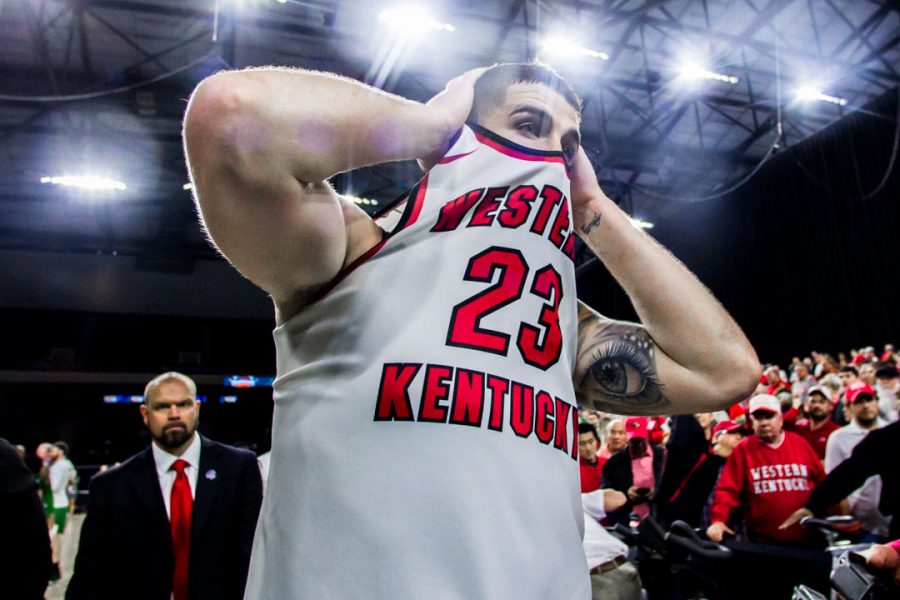 WKU Forward Justin Johnson (23) walks off the court following the Hilltoppers 67-66 loss in the championship game of the Conference USA tournament against Marshall University on Saturday March 10, 2018 at The Star in Frisco, Tx.

The WKU men’s basketball team’s ticket to the NCAA Tournament rimmed out in the final seconds of the Conference USA championship game against Marshall University.

Trailing by 12 late, the Hilltoppers went on an 11-0 run to pull within one point. Junior guard Lamonte Bearden’s go-ahead floater rimmed out with seven seconds to play, and the Hilltoppers weren’t able to foul the Thundering Herd on their final possession, as Marshall held on for a 67-66 victory. Jon Elmore scored a game-high 27 points for Marshall while WKU senior forward Justin Johnson scored 21 points and grabbed 12 rebounds to lead WKU.

“There’s no words to describe it really. It hurts,” Johnson said. “Tip your hat to Marshall, they made some big shots and they made it tough on me to get going offensively.”

Marshall’s Ajdin Penava played sparingly in the teams’ first two meetings due to injury and foul trouble. In the early minutes of the championship game, the nation’s leader in blocks showed off his ability from long range, hitting two 3-pointers in the opening three minutes to give the Herd an early 6-5 lead. Penava finished with 16 points and nine rebounds.

“He was 3-for-5 for the game (from deep),” head coach Rick Stansbury said of Penava. “He was a huge difference. There were only two guys scored in double figures for them, him and Elmore … If you would’ve told me before the game that was the case I would like our chances.”

The two teams would continue to trade buckets and, with WKU leading 31-29 with 3:19 to play in the first half, Marshall’s Jon Elmore hit a 3-pointer to give the Thundering Herd a lead that would not be surrendered. Jannson Williams would hit two free throws towards the end of the half to give Marshall a 34-31 halftime lead.

“At halftime, I didn’t think we could’ve played much worse offensively,” Stansbury said. “But we were only down three. We thought we would get it going, but we never got it going the way you got to get it going, they did a good job of doubling Justin every time he touched it. When that happens, you have to have another big who can finish and guys that can make some shots and we didn’t have enough of that.”

Marshall stretched the lead to 42-37 before Elmore gave Marshall the team’s first double-digit lead of the night. The C-USA Tournament MVP scored 11 points in a span of less than three minutes, capping it off with a 3-pointer well behind NBA range in the face of Johnson to give the Thundering Herd a 53-41 lead with 13:01 to play.

“He hit some deep shots, Stansbury said of Elmore “Some of those shots were shots that you’d probably say let him shoot it. He’s a guy that stepped up in a big moment and made big plays.

A 10-2 Hilltopper run cut the deficit to four points before another Elmore 3-pointer pushed the lead back to seven with 8:02 to play. Elmore’s final dagger came with 3:40 to play when he drained another deep 3-pointer just seconds before the shot clock buzzed to give Marshall a 67-55 lead.

That’s when the Hilltoppers made their final run. Bearden drove inside, drawing a double team and setting up an easy pass to freshman guard Josh Anderson to jumpstart the run.

Trailing 67-63, graduate transfer guard Darius Thompson intercepted an Elmore pass before finding Johnson at the top of the key. Johnson hit a 3-pointer right in the face of a Marshall defender, bringing WKU within one point.

“We just got stops and rebounded the ball,” Johnson said of the late run. “At the end of the day it comes down to getting stops, and when you get stops you have to make a play on the offensive end. We did that at the end.”

The Hilltoppers would get a final stop, setting up their final possession where Bearden’s go-ahead floater rimmed out. Anderson swarmed to tip the ball in as it came off the rim but wasn’t able to capitalize. Anderson immediately fouled, leaving WKU one foul short of putting the Thundering Herd on the free-throw line. Marshall was able to throw the ball down the court off the inbounds, and WKU never got the final foul as Marshall held on for a 67-66 victory.

The Hilltoppers exit the C-USA Tournament with a 24-10 overall record. WKU will learn Sunday night whether or not they will receive a bid to the NIT.

“I feel very confident thinking our team has done enough to be an NIT team for sure,” Stansbury said. “With our RPI and wins, where we’ve been I see no reason why we wouldn’t be an NIT team.”