Editorial: Give teachers a seat at the table 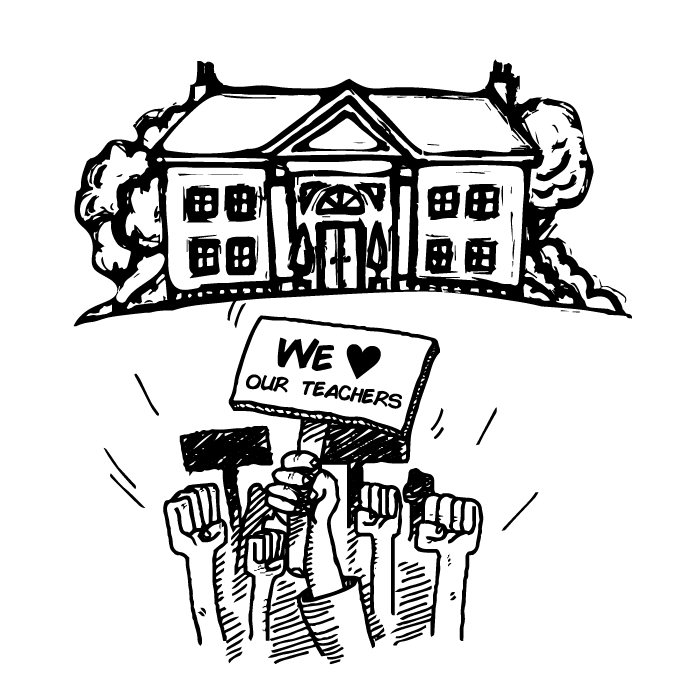 The Issue: The state of Kentucky is currently in the midst of financial chaos. In order to aid the state pension system, which has been massively underfunded due to failure to take action by previous administrations, state leadership has proposed balancing the budget on the backs of state employees, specifically teachers, in the form of Senate Bill 1. Under this legislation, traditional pensions for future teachers would cease to exist and cost-of-living allowances would be cut for teachers who have retired.

Our Stance: Instead of rallying behind the educators who are understandably protesting this attack on their promised benefits, Gov. Matt Bevin has taken to pitting the public against teachers by trying to label them as “wanting more than their fair share.” Instead of demonizing public school teachers, state leadership should give them a seat at the table when discussing this particular legislation where they have the most to lose.

Ask just about any teacher you know and they’ll tell you they’ve had to pay out of pocket for basic classroom supplies. Talk to a teacher who, instead of taking the summer to recuperate after months of working in a high-stress environment, chooses to volunteer to teach summer school to help kids who are falling behind. These individuals, who play a major role in shaping the minds of our next generation, are far from “selfish” and certainly not “ignorant.”

This financial crisis Kentucky currently faces is not the result of a single person, but rather a by-product of collective inaction on the part of previous administrations to properly address the failing pension system. Under the plan proposed by Gov. Bevin, the pension system would be fully funded, but at a tremendous loss to teachers who are exempt from collecting a social security check. In exchange for not collecting on social security, teachers rely on this pension plan to get them through retirement.

It’s not a matter of teachers “wanting more than their fair share,” it’s about pushing back against the state’s intention of taking from them what’s rightfully theirs. Can you really blame teachers for fighting for their benefits that have been promised to them for years while the state government continues to give away billions of dollars each year through tax breaks?

One need only to look as far as the neighboring state of West Virginia, whose schools completely shut down for almost two weeks, to predict what will happen if Kentucky’s state government refuses to follow through on their promise to properly fund the pension system.

Perhaps, instead of trying to fix this mess all by themselves, state leadership would find it worth their time to give educators a seat at the table when discussing such a controversial issue as cutting benefits.

Teachers have a wealth of experience and knowledge to draw upon that could forge a path to a compromise that balances the budget without placing it fully on the backs of educators and other state employees. They are not the ignorant, self-serving individuals Gov. Bevin has tried to make them out to be.

Whether Gov. Bevin’s ego will allow this reasonable action remains to be seen.