Eighth inning dooms Hilltoppers in loss to No. 15 Louisville 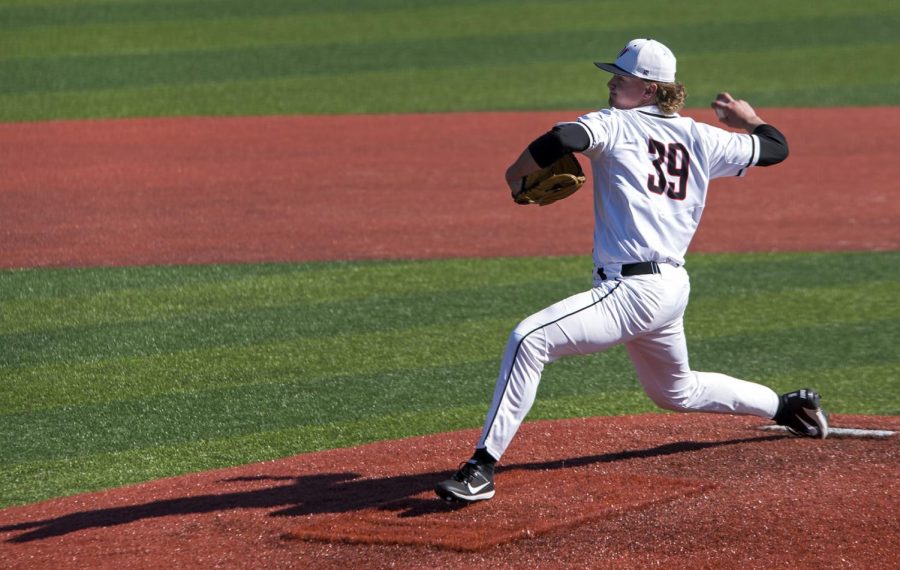 Freshman Maddex Richardson, pitches during the game against West Virginia Sunday, March 4 at Nick Denes Field. The Toppers lost with a final score of 7-1.

WKU baseball was looking for an upset over No. 15 University of Louisville until a disastrous eighth inning. The Hilltoppers surrendered five runs on five hits in the eighth, and then left the bases loaded to end the game in an 8-5 loss to the Cardinals.

“We had our chances in the ninth inning, and that’s all you can ask for,” WKU head coach John Pawlowski said. “You get your tying and possibly winning runs at the plate to give yourselves a chance, and we did that.”

Senior Austin Tibbs took the loss on the mound for the Hilltoppers, who utilized a total of nine different pitchers in a game that ran for three hours and 43 minutes.

WKU (10-11) led for the majority of the game as the Hilltoppers jumped out to an early 1-0 lead in the bottom of the second inning when senior left fielder Colie Currie belted a solo home run over the wall in right center. It was the senior’s second long ball of the season.

Louisville (17-4) answered right back in the top of the third after back-to-back batters were hit by a pitch. Logan Wyatt laced a pitch down the left field line to score Jake Snider with only one out. Michael Martin entered the game in relief for WKU, and the graduate student recorded two consecutive strikeouts to strand two Cardinal runners on base.

The Hilltoppers then regained the lead in the bottom of the fourth on a solo home run to left field by junior outfielder Jacob Rhinesmith.

“He got a fastball up (in the strike zone) and put a good swing on it,” Pawlowski said. “He’s done that all year for us. He’s an exciting player, and I’m glad to see the success that he’s had so far this year.”

The junior currently leads the team with eight home runs and 22 RBI on the season.

U of L seized the lead back in the top of the fifth with a two-RBI double to left field by Devin Mann off of WKU reliever Devon Loomis. Loomis came in after graduate student Michael Martin opened up the inning by issuing back-to-back walks.

Senior infielder Steven Kraft and Rhinesmith both notched singles in the bottom of the sixth to put runners at first and second with only one out. The Hilltoppers went back in front 4-3 after redshirt senior Tyler Robertson reached on an error by Cardinal right fielder Drew Campbell with two outs.

Neither team was able to scratch across a run in the seventh, but Louisville tied the game on an RBI single by Tyler Fitzgerald in the top of the eighth. The Cardinals took the lead for good just two pitches later as Snider drove a single into center field to plate Fitzgerald and Lucas Dunn and give Louisville a 6-4 advantage.

Danny Oriente followed with a two-out, two-RBI single to right field to push the Cardinals’ lead to four runs. WKU put two runners in scoring position in the bottom of the inning, but they were left stranded after freshman outfilder Luke Brown grounded out to end the inning.

WKU made one last rally in the bottom of the ninth when Kraft singled to score junior infielder Chase Larsen. But the Hilltoppers left the bases loaded as Currie struck out to end the game.

WKU will travel to Rice University this weekend for its first road Conference USA series of the season. The Owls are winless in conference play, dropping all three games of their first C-USA series at Louisiana Tech this past weekend. Pawlowski is hoping his team is able to take the next step and break through in Houston.

“We have to learn how to take those positive steps or the things we’ve done well and keep working on those things,” Pawlowski said. “The things we need to improve on are the difference makers between winning and losing right now.”