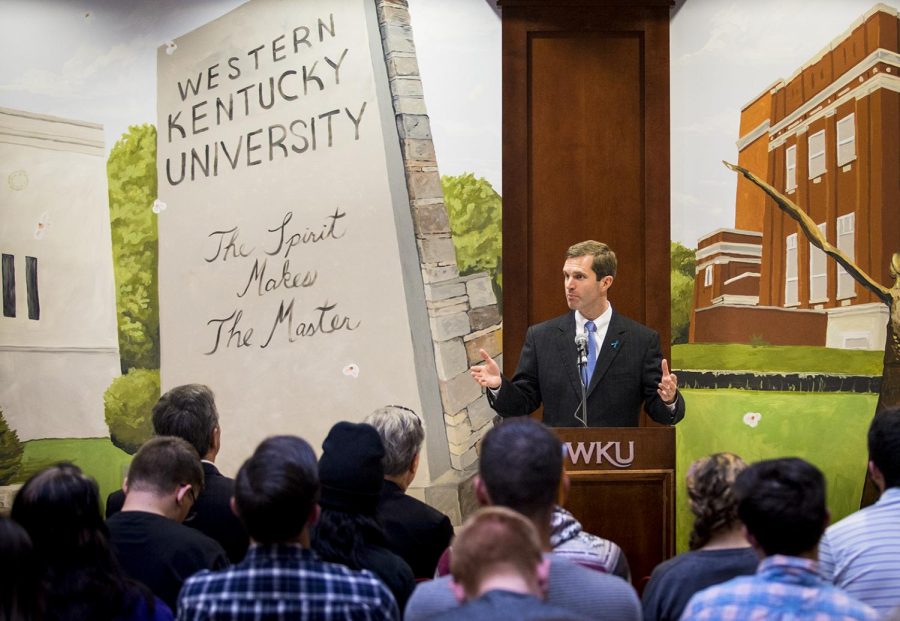 Kentucky Attorney General Andy Beshear addresses members of the WKU community on Monday about Sexual Assault Prevention Month. The event included the signing of a proclamation focusing on creating a safer campus for students and faculty members alike.

In Kentucky, one in two women will face sexual violence in their lives and 21 percent of women have faced a form of sexual assault at their college campus, according to Kentucky Attorney General Andy Beshear.

The kickoff event was hosted by the Student Government Association, whose goal was to help the community demonstrate what people can do to prevent sexual assault.

Philip Neal, president of Southern Kentucky Community Technical college, said he believes “we are on the brink of massive changes from different movements and the kick-off event.”

In a study conducted in 2015, as stated by Neal, 1 in 5 women and 1 in 16 men had faced sexual assault on campus. Only 36 assaults had been reported in Kentucky that year.

“Too many people sit inactive in a sexual harassment situation or don’t know what to say,” Beshear said. “I encourage you all to speak up.”

The United States Department of Justice gave a $1 million grant to Kentucky to create a training center to help victims that face sexual assault, according to Beshear.

The grant created a victim center to help investigations and prosecutors help victims.

“Victims deserve people to believe and seek justice for them,” Beshear said.

Kentucky also received a $3 million grant to prevent rape kit backlogs. Currently, there are 3,100 rape kits that have not been tested yet, Beshear said.

“These rape kits stands for the people who had the courage to report and go through an invasive forensic exam that traumatized the individual,” Beshear said.

Currently, the 3,100 rape kits are being tested and Beshear’s goal for next year is “to have every kit tested and to have no kits go untested,” he said.

After the event, SGA opened the Intercultural Engagement room, located in DSU, for people to see an exhibit of the clothes women were wearing when they were sexually assaulted.

Next to the clothes was the story of the women when the event took place and how old they are.

Every story in the exhibit was affiliated with a woman from WKU. They told stories of professors, current students and past students.

Provost David Lee helped WKU and Hope Harbor collaborate to create events for students, professors and residents of Bowling Green to attend during the month of April.

Hope Harbor is a recovery center in Bowling Green to help victims in times of crisis. They offer a 24-hour hotline for anyone who faces sexual assault no matter the time of day.

“The month of April is going to be filled with events,” Lee said. “The theme for this year’s SAAM is ‘use your voice.’”

During his speech, Beshear said it is important to speak up against sexual assault.

“If you see something then say something,” Beshear said.

News reporter Camryn Smith can be reached at 586-295-8427 and [email protected] Follow her on Twitter at @camryn_smith56.