Johnson’s double-double, stellar defense gets WKU to C-USA Championship round 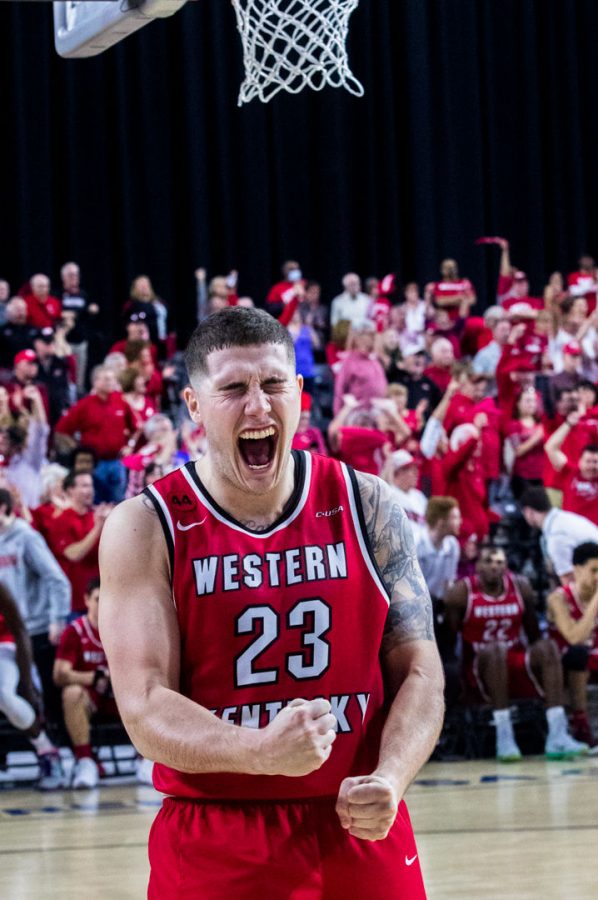 WKU Forward Justin Johnson (23) celebrates after the Hilltoppers 57-49 win in the semifinal game of the Conference USA tournament against Old Dominion University on Friday March 9, 2018 at The Star in Frisco, Tx.

Despite scoring a season-low 57 points, the WKU men’s basketball team pulled out a 57-49 victory over Old Dominion University in the semifinals of the Conference USA tournament.

The Hilltoppers went up against C-USA’s best team in scoring defense, but they played great defense of their own, holding ODU to a season-low of 49 points.

Justin Johnson led WKU with 19 points and 13 rebounds to record his second double-double in the C-USA Tournament. Freshman guard Taveion Hollingsworth scored 11 points to also break double figures. Trey Porter led ODU with 19 points in the losing effort. The loss gives ODU four total C-USA losses, and three of those came at the hands of WKU.

“I’m awfully proud of our guys,” head coach Rick Stansbury said. “It’s hard to beat a good team three times. Our guys dug in, they overcame some different variables in that game that didn’t go our way. It wasn’t our best offensive game and Old Dominion had a lot do with that. They made it a grind it out game. For our guys to out rebound them, it shows the effort and toughness our guys played with tonight.”

Graduate transfer guard Darius Thompson’s jumper put WKU on the board first, but for the next 10 minutes the Hilltoppers would struggle against C-USA’s best scoring defense. The Monarchs’ zone defense gave up just 11 points in the first 10:56 of play to help give ODU an early 16-11 lead.

Hollingsworth and graduate transfer forward Dwight Coleby both picked up two early fouls, leaving WKU without two of the team’s main contributors for the majority of the first half.

One positive in the early going was when Johnson brought down his second rebound of the game with 16:52 to play in the first half. The board was Johnson’s 1,000th of his career, making him just the fifth player in WKU history to record 1,000 points and 1,000 rebounds in a career.

“That’s a tough accomplishment that I’ve been chasing for a long time,” Johnson said. “I knew coming into the season I needed 302 rebounds. I had exactly 302 rebounds lasts year, so I knew it was going to be tough especially with Dwight [Coleby] in there. You can have my 1,500 points, the 1,000 rebounds is what feels really good.”

Trailing by five, freshman guard Josh Anderson’s missed layup was tipped in by Johnson to cut the deficit to three and jumpstart a momentum-shifting run. Johnson’s and-one just moments later capped off a 10-0 run that completely flipped the five point margin.

ODU’s Randy Haynes answered with a jumper to make it a one-possession game before Anderson matched it with a layup. Freshman guard Jake Ohmer’s and-one jumper with 2:15 to play in the first half gave the Hilltoppers an eight point lead.

On the following Monarch possession, ODU’s Stephen Vassor was called for a technical foul after disagreeing with a foul called on him. Thompson and Johnson would each hit a free throw to cap off a 17-2 run and give WKU its first double-digit lead of the game.

After the Monarchs cut the lead to six points, the Hilltoppers had five seconds to try to stretch the lead before the half. Junior guard Lamonte Bearden received the inbounds pass and sprinted down the court before hitting a deep 3-pointer on the right side from NBA range to give WKU a 31-22 halftime lead. It’s the second consecutive game Bearden scored or assisted on a 3-pointer at the halftime buzzer.

“Those are real big because they’re momentum-changing plays,” Bearden said. “It was a big shot, I wasn’t going at them much in the first half so it was a big play to get us going.”

Slowly but surely, the Monarchs chipped away at the Hilltoppers’ lead. Porter’s jumper with 9:26 to play gave the Monarchs a 41-40 lead, their first lead since the first half. Hollingsworth knocked down two free throws to help WKU reclaim the lead before Johnson’s first 3-pointer of the game pushed WKU’s lead to 45-41.

“He’s great, not only down the stretch but in the median of the game also,” Bearden said of Johnson. “He’s a leader and he wants to win bad right now. He needs that ring right now. He’s hungry.”

“It’s two contrasting styles,” Stansbury said of playing Marshall after playing Old Dominion. “They’re going to spread that floor out and shoot the three. If you have the ability to shoot the ball like Marshall does, you have a chance to win against anybody. Now it’s a one game season, a one-game championship. Now is when you really can pull in some emotion, and I like our guys with emotion.”