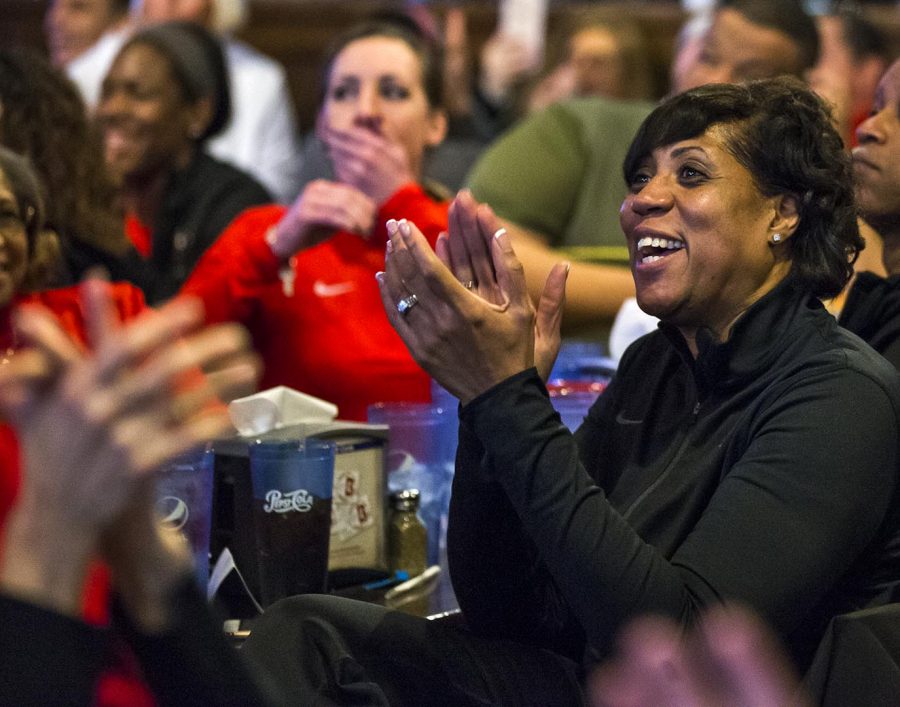 WKU women's basketball head coach Michelle Clark-Heard reacts to the reveal of their initial opponent for the NCCA tournament at Mister B's restaurant on Monday, Mar. 12.

Head women’s basketball coach Michelle Clark-Heard is leaving WKU to take the same position at the University of Cincinnati, the Herald has confirmed.

Clark-Heard was making $200,000 per year as WKU’s head coach, according to her contract. Her buyout for terminating the contract and taking another job is $250,000, to be paid over a six-month period.

“This is one of the hardest decisions that I have ever made in my career,” Clark-Heard said in a press release. “What we have built here at WKU is special. As a team, I always talk to our players about leaving a place better than you found it. I want to thank my players, my coaching staff and my support staff for helping to make that a reality over these last six years. I will forever be grateful to Todd [Stewart] for giving me this opportunity, and to the community and my family for embracing me and this program, know that I will forever be a Lady Topper and appreciate all of the love and support that you have given us.”

Clark-Heard was an assistant with the Bearcats from 2002-05. She’s coached WKU to four NCAA Tournament appearances with a 154-48 record in six seasons.

“Six years ago, Michelle Clark-Heard inherited a program coming off a school-record 21 losses the prior season. The job she has done has been truly remarkable. Our 154 total wins during her tenure include four NCAA Tournament appearances, four conference tournament championships and two conference regular season championships,” athletics director Todd Stewart said. “Exhibiting a tireless work ethic and daily devotion to her players, she has demanded and delivered excellence on and off the court and represented WKU and the Lady Topper Basketball program with passion, grace and class. As a result, our program is in a significantly better position today than where it was in March of 2012. We truly wish Michelle all the best in her future endeavors.”

Clark-Heard also played for the Hilltoppers from 1987-1990, making four NCAA Tournaments as a player.

“The hallmark of a great university is a leadership that cares for its students, whether that leadership is faculty, staff, administrators or coaches,” WKU President Timothy Caboni said in a press release. “Hilltopper athletics has been blessed with a cadre of coaches who put the student first in student-athlete, and Coach Clark-Heard is at the forefront. We will always be grateful for what she has meant to the Lady Topper program, from the student-athletes to the loyal fan base. We look forward to following her continued success.”

Greg Collins will be the new head coach of the Lady Toppers. Collins has been a WKU assistant coach for the past six seasons, serving as associate head coach for the last four. Deborah Wilkins, general counsel, has said that a contract for Collins has not yet been drafted.

This is a developing story, the Herald will update it as more information becomes available.