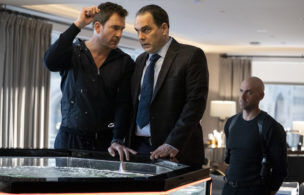 If you enjoyed watching Detective Elliot Stabler (Christopher Meloni) and crime boss Richard Wheatley (Dylan McDermott) face off in the second episode of Law & Order: Organized Crime, you’re not alone. Richard did, too, according to McDermott.

“He welcomes the challenge,” the star tells TV Insider.

While we have yet to see him get his hands dirty onscreen — he killed his father, Manfredi Sinatra (Chazz Palminteri), off-screen — that is going to start to change. “He’s lethal and you will see some of that leak out” in Episode 3, McDermott teases.

What will we see from Richard this week?

Dylan McDermott: The octopus is really who Richard is, so of course he has a pet octopus in his office. You’ll see what he does this week, how he uses it to get what he wants. It’s not just a pet, it’s actually a device. That really explains Richard so well because he’s so calculated. Everything is a move with this guy. Although it appears that everything is for show, he’s using every bit of his life to gain what he wants. Richard and Stabler face off again. How does that dynamic change with each confrontation?

I find it so humorous because a lot of times, I’ll ad-lib a bunch of stuff and you never know what’s gonna make it to the screen. Most of the time I do it to amuse myself and on this particular show, they’re using a lot of my ad-libs, which is fun to see. I have some ad-libs with that scene with Stabler that cracked me up.

Something that stands out is Richard is a family man. We can tell how important family is to him from the beginning.

Richard loves his family. He would literally kill for his family and guess what? He did. We see that in the very first episode. His father went up against him, against his family. There were childhood issues with his father early on that broke Richard and made him become the man he is. He shamed him for his weight. That never sat right with Richard. Then he shamed him again with his family because they were Black. His father was a racist. And what did Richard do? He killed him. We see that this man is lethal, but at the same time, as you just brought up, he loves his family more than anything in the world. His relationships with his kids are each unique.

He’s always looking for someone who’s as smart as him. Richie [Nick Creegan] is not that. He’s got his looks, but he didn’t get the brains. [Laughs] That’s a sore spot. We’re going to see some of that in this episode with Richie because he’s trying to groom Richie as much as he possibly can, but at the same time, he falls short each time.

He’s trying with all his kids, but don’t forget, this is a criminal family. Although he’s a great dad, someone would think, “Wait a minute, you’re grooming them for crime? How could you be a great dad?” But he’s teaching them the business and whatever it takes to eventually take over when he goes.

He has his daughter, Dana (Christina Karis), working at his company.

She’s the smartest. That’s why he likes her the most because he knows that intellectually she’s right where she should be. He even says in this episode to Angela [Tamara Taylor] that she’s maybe even smarter than her. Richard and Angela’s relationship is complicated, to say the least. It seems that they can’t stay away from each other. What draws the exes to one another?

Richard lets very few people into his life and Angela is definitely one of them. Because he trusts her, because she’s intellectually on his same level, he keeps going back to her. And I believe that there’s also some kind of addiction going on between them. They may not love each other, but there’s some kind of chemical thing between them that they can’t let go of.

That doesn’t go over well with his wife, Pilar (Shauna Harley), and it seems like Angela is more involved than she is with his family business.

Pilar really tolerates a lot of what Richard does. Richard’s the boss and she has to put up with all his shenanigans and she knows that he takes care of her and she’s got to tolerate Angela. I’m sure it sucks for her. I’m sure she doesn’t want to be in that position. I’m sure she’s thinking, “Why is this woman always here? Why can’t this be just me and you?” I’m sure that it gnaws on her. Richard does his best to try to calm her and make her feel better about it. It’s a triangle that isn’t really comfortable for anyone but Richard. Because he’s a malignant narcissist, he doesn’t really think that much about it. There are photos of Stabler, Angela, Richard, and Pilar at some sort of event this week.

It’s not pleasant between any of these people. There’s always conflict, and usually, Richard’s in the middle of it, which I think he wants to be. He likes the attention. He likes when people talk about him. He likes buildings named after him. He likes to pile up all the cash in the world. He wants everybody to be around him. That’s his disease if you will. That’s what’s interesting about playing him.

We saw that in the way you played the first scene with Stabler in Episode 2, an almost delight to have that confrontation.

That’s what it is: a delight. He welcomes it. He welcomes the challenge. He lives for it because here’s a man who’s not challenged much. Everybody kowtows to him. Everybody makes it better for Richard. They tolerate him. When someone does come along like Stabler to challenge him, he’s thinking, “Well, this is interesting. I’ll figure out how I can squash him.” Richard’s name is important to him. He doesn’t like being called Dick or Richie and took his ex-wife’s last name.

He changed his name to distance himself from his father because he didn’t want to be Sinatra [or] tied to the Italian mob: “I’m going to start my own business, my own crime syndicate. I’ll learn how to do it above board so nobody’s really watching, I’ll make a lot of money in pharmaceuticals and I’ll change my name. I’m a proper businessman. I am Richard. I’m not some street kid Richie.” He’s always distancing from his father because his father is the person in his life who caused him to be a sociopath and he knows it. He knows the trauma was so deep that it caused him to break and he became the person he became because of his father. There’s a deep-seated hatred there.