Hilltoppers get series win thanks to starting pitching, strong offense 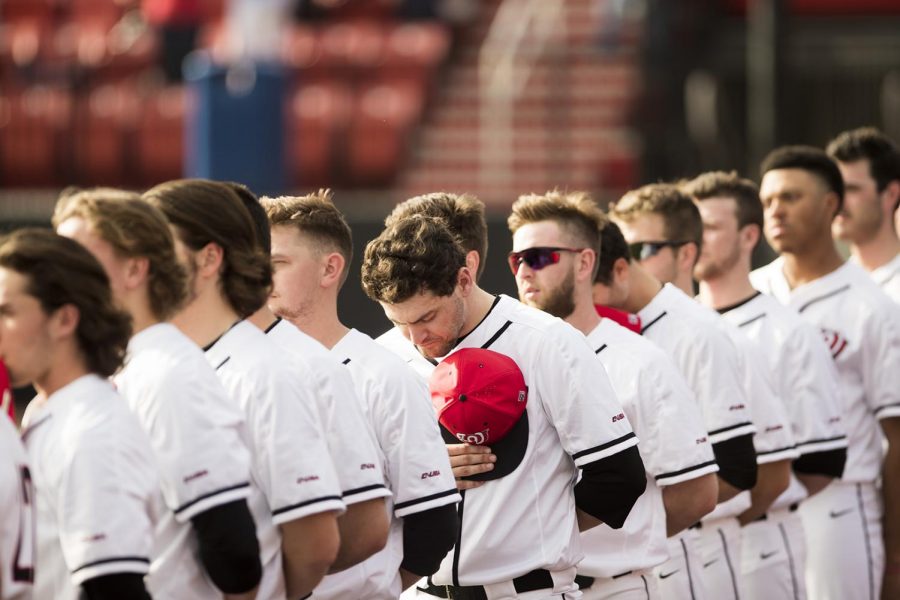 WKU baseball team lined up for the national anthem Tuesday on Feb. 20, 2018. The game ended in a win for the WKU Hilltoppers at 4-1.

The WKU baseball team won its first home series of the season against Northern Illinois University, winning three out of four games, including the program’s first home doubleheader sweep since April 2015.

The Hilltoppers were propelled to victory by a number of factors, including a high-scoring offense and a strong showing from their starting pitching.

“We try to schedule tough teams and good competition and this weekend, you know, was an indication of how challenging every weekend is,” head coach John Pawlowski said. “I’m encouraged by the signs that we see and the development that’s taking place with some of these guys.”

The series win comes after the Hilltoppers won their home opener against Belmont University and moves WKU to 5-3 on the season, the team’s hottest start since 2016.

In the first game of the Friday doubleheader, which was previously scheduled for Saturday, but was moved due to concerns over the weather, senior pitcher Ryan Thurston got his first win of the season, striking out nine NIU batters and only allowing two earned runs, the best performance during a stellar weekend for WKU’s starting pitchers.

“I think our guys have gone out there and done a really good job,” Pawlowski said. “Their goal is to get us deep into the game. I feel like we have some potential guys who can certainly do that. Proud of what they’ve done so far but a lot of work yet to do.”

WKU’s offense was dynamite in the first game, with senior left fielder Colie Currie and junior right fielder Chase Larsen leading the way, each getting hits on their first three at bats.

“I was just trying to swing at good pitches,” Currie said. “Me and Chase both were both rolling that day so we were just feeding off each other’s positive energy.”

After the Huskies closed the gap to make the score 6-4 in the sixth inning, junior catcher Colin Butkiewicz hit a two-RBI double and then scored on a sacrifice fly to make the final score 9-5 in favor of the Hilltoppers. Senior Ben Morrison got the save and NIU senior George Faue took the loss.

In the second game of the doubleheader, WKU’s offense stagnated. The Hilltoppers were held without a hit until the seventh inning. Fortunately for the Hilltoppers, their defense was excellent and junior RF Dillon Nelson hit a solo home run in the eighth inning to give WKU the 1-0 victory. Morrison got his second save of the day.

On Saturday WKU got off to a slow start, as NIU took a 2-1 lead into the bottom of the fourth inning. The Hilltoppers loaded the bases before the teams were pulled from the field for a 45-minute lightning delay. After the delay, WKU scored six runs to blow the game open and then added one run in the fifth and two in the seventh to earn a 10-2 victory.

The Hilltoppers couldn’t pull of the series sweep, falling 5-0 Sunday after being unable to generate any meaningful offense, only managing five hits while giving up 11. Junior pitcher Troy Newell took the loss for WKU, his second of the season, while freshman pitcher Michael Lasiewicz earned the win for the Huskies.

“We wanted to complete the sweep today,” said Nelson, who went 3-for-3 in the final game of the series. “But three wins out of four, it’s tough to beat a team four times.”

The Hilltoppers will hope to extend their momentum to their midweek away game against number eight-ranked University of Kentucky, before coming back to Nick Denes Field for a weekend series against West Virginia University, a team which began the season ranked in the top 25, but has struggled out of the gate, starting 2-5.