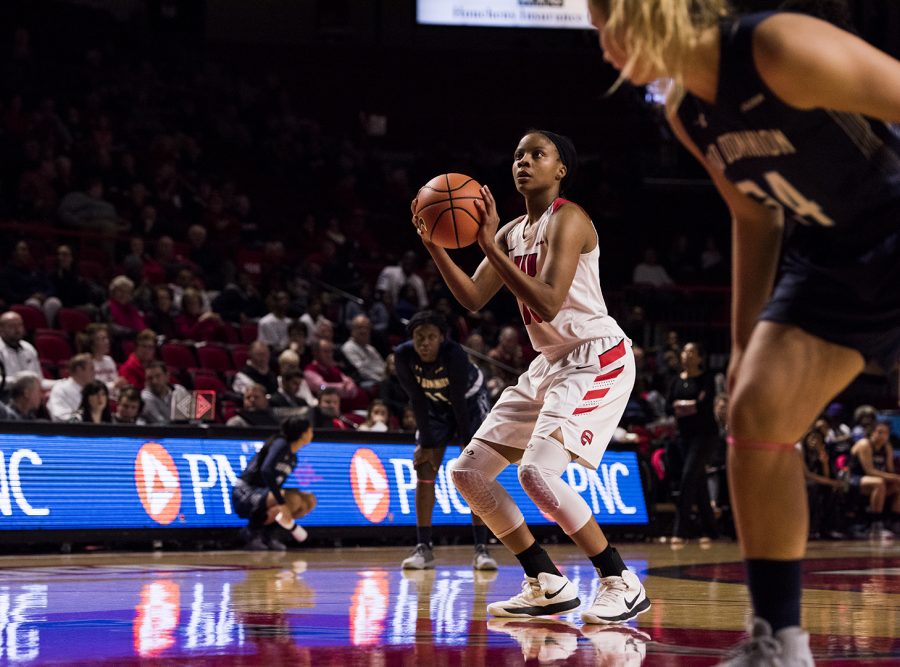 Senior forward Tasha Brown shoots a free throw in the Lady Toppers game against Old Dominion on Feb. 8 at E.A. Diddle Arena. Brown led WKU with 23 points for a final score of 62-48.

WKU women’s basketball dropped its second Conference USA game of the year on Saturday night with a 73-58 loss to Rice University. The loss knocked the Lady Toppers out of first place in the C-USA standings.

The Lady Toppers (18-6 overall, 9-2 C-USA) took a two-point lead into the second quarter, but were outscored in each of the final three quarters of the game, including the Owls going on an 18-9 run in the fourth quarter to secure the victory. Ivy Brown recorded her 30th career double-double with 16 points and 13 rebounds, and Tashia Brown led all scorers with 23 points, but those two efforts were not enough to overcome Rice’s 52.8 percent shooting. The Lady Toppers shot just 33.3 percent for the game, including Tashia Brown going just 7-for-22 en route to her 23 point performance.

The loss pushed WKU back to second in the C-USA standings at 9-2, behind 9-1 University of Alabama-Birmingham. The Lady Toppers no longer control their own destiny in the regular season C-USA race. In order to regain at least a share of the conference title, WKU will need UAB to drop at least one of its last six games.

Success on the road will be key, as WKU must play three of its final five games on the road, including Thursday’s trip to Murfreesboro, Tennessee to take on Middle Tennessee State University. The road tests have been a weak point this year, as WKU is just 4-4 when playing away from Diddle Arena. MTSU is 8-4 this season at home, including losing its last home game against Louisiana Tech University.

The Lady Toppers will get an average of three days off before each of their final five games. That is a positive compared to UAB’s remaining schedule, as the Blazers must play six games down the stretch, including also having to play two road games to finish out the season at University of North Texas and University of Texas-San Antonio. The Blazers are set to begin a four-game home stand starting this Wednesday, but each of the four games will be against teams slotted just under UAB and WKU in the C-USA standings. Rice (third), MTSU (fourth), Charlotte (fifth) and LA Tech (sixth) are slotted 3-6 in the conference standings, so UAB will get tested at home before heading out of town to finish the season.

Cheryl Miller Award candidate Tashia Brown is likely to have a major impact on WKU’s shot at a regular season conference title. Brown is averaging 23.2 points per game this season, a conference best, and has 19 20-point games this season, including six in a row. WKU is 16-3 this season when she scores 20 or more points, compared to 2-3 when she scores less than 20. The Lady Toppers are also 3-0 in Brown’s 30+ point games. Brown’s scoring efficiency has been another key factor in WKU’s success. In WKU wins this season, she is shooting 44.6 percent from the field. In games WKU has lost this season, that number is just 33.3 percent.

UAB will begin its four-game homestand by hosting Rice this Thursday night, the same time the Lady Toppers will look to start another winning streak when they take on MTSU in Murfreesboro.