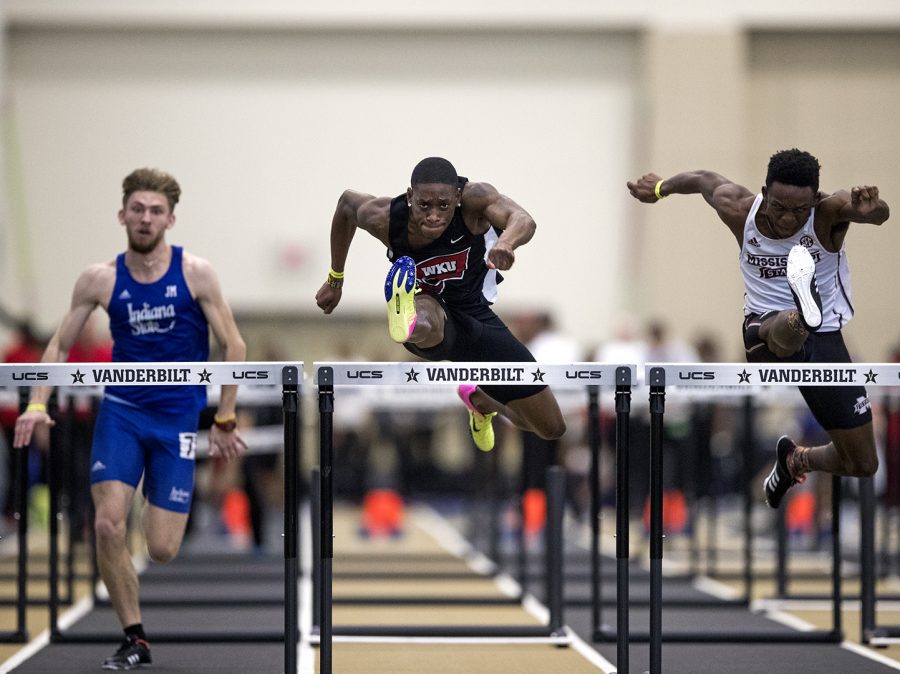 Johnathan Hayden competes in the men's hurdles event during Vanderbilt's Music City Challenge on Saturday, Feb. 10 at Vanderbilt Rec. Center and Indoor Track Facility in Nashville, Tennessee. Hayden finished 3rd to qualify for the finals where he also placed 3rd with the time of 7.97.

The WKU track and field team earned five All-Conference honors this weekend as the team wrapped up its indoor season at the 2018 Conference USA Indoor Track & Field Championships.

Senior Morgan McIntyre stole the show this weekend as the senior repeated as the women’s pole vault champion on Sunday, and head coach Erik Jenkins said he was very pleased with her efforts.

“Morgan McIntyre did a great job of defending her conference title today,” Jenkins said. “I was really happy with how she performed at the Championships.”

McIntyre’s performance helped the Lady Toppers to an 11th place team finish in the championships. The team tallied 19.5 points total. McIntyre reached her second-best height of the season of 3.90 meters (12’9.5”). That was 8 inches better than the second-place finisher Ayane Rossano of Rice University. The Lady Toppers had two pole vaulters land All-Conference honors, as junior Getter Lemberg tied for third with a clearing jump of 3.70 meters (12’1.5”). To finish out the pole vaulting for the squad, Freshman Nicole Ogorek finished tied for ninth with a clear of 3.60 meters (11’9.75”) in her first championship appearance.

The men’s team posted a score of 44 points, and that was good enough for an eighth place finish. Senior Jonathan Hayden posted a personal record in the 60-meter hurdles, clocking a 7.94-second time for second place. That mark was also the third-fastest in WKU program history. The All-Conference honor was Hayden’s third of his career.

Seniors Julius Morris and Eli Minor came in third and fourth in the 60 finals with times of 6.72 and 6.75. Morris’ All-Conference honor is also the third of his career. Later Sunday, Morris collected his second top-three finish with a personal best 20.92 in the 200 dash, which was good for second in the conference. That was the senior’s fourth career All-Conference honor in that event. Minor also added some points for the Hilltoppers, as he recorded a time of 21.60, good for sixth pace. Coach Jenkins was happy with the senior sprinters’ efforts.

“Julius Morris and Eli Minor competed at a very high level in two events to secure crucial points for us this weekend,” Jenkins said. “Julius ran two personal bests in the 200-meter at the Championships while Eli ran a lifetime best in the 60-meter prelims.”

WKU now has nine of the 12 possible Indoor All-Conference spots in the men’s 200 dash since joining C-USA prior to the 2014-15 season.

The Hilltoppers’ 4×400 relay team put some points on the board, as a team comprised of junior Austin Hayes, junior Oliver Alexandre, freshman David Saruni and junior Kymari Gates finished with a time of 3 minutes, 15 seconds and seven-tenths of a second, and that finished fifth. Alexandre (48.82), Charles Shimukowa (49.25) and Gates (50.07) scored the final points for WKU as they finished six through eight in the 400-meter dash.

With the indoor season over, WKU will be off until March 9, when it will begin its outdoor season at Texas A&M University.