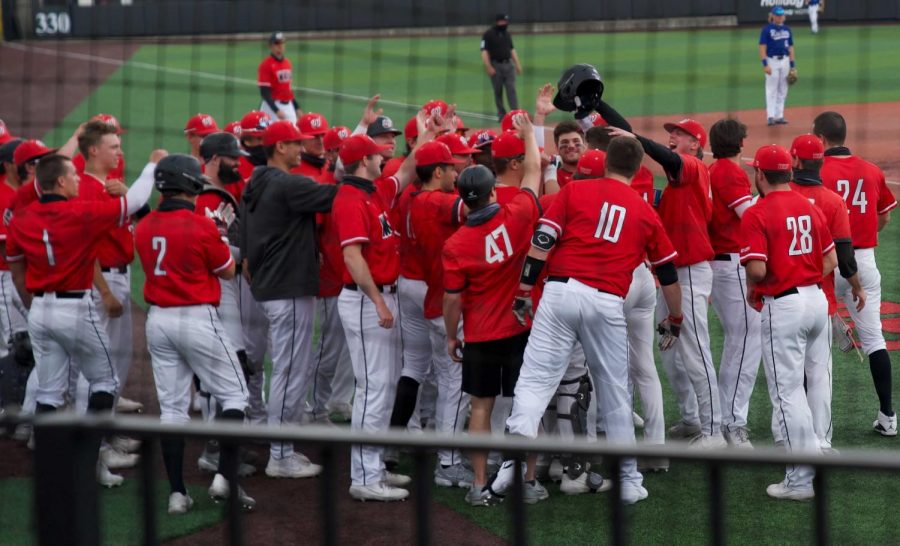 WKU celebrating Jackson Gray's fourth homerun of the season. The Hilltoppers split its series against Middle Tennessee on April 18, 2021.

“We’ve played great defense over the last 30 innings or whatever it may have been or 32 innings,” assistant coach Ben Wolgamot said. “Those guys, they’re locked in, they’ve made the routine plays and now you’re starting to see some of these some of these really nice plays being made.”

Head coach John Pawlowski did not coach the game due to a non-COVID related illness. Wolgamot took over for Pawlowski.

Sophomore Jackson Gray went 2-for-3 along with his third homerun in four games on a solo shot in the bottom of the fourth inning.

“My approach is always just try to hit the ball hard,” Gray said. “Usually that’s when good things happen and this weekend I was able to get enough launch angle on a few of those to get out.”

Redshirt junior Hunter Sullivan went 3-for-4. While scoring the only run for the Blue Raider in the top of the seventh inning.

Freshman Luke Stofel got his second consecutive series finale start for WKU. He pitched for six innings while striking out Blue Raider batters. Stofel surrendered four hits but no runs to score. Stofel is now 2-0 this season in his 12th appearance this season.

“Whenever you just have coaches that believe in you, they put that trust in you, and your teammates are behind you the whole way and everything just kind of rolls into itself,” Stofel said.

MTSU’s junior Zach Keenan got the start making his second appearance of the series. He tossed for six innings giving up three runs and six hits. Keenan allowed three WKU runs to score. Keenan is now 2-3 on the mound this spring.

Junior Fausto Lopez singled to lead-off the game with a blooper into right field for MTSU. Lopez was picked off during the next at bat by Stofel for the first out of the game. Stofel then forced a fly and ground out to end the top of the first frame. WKU went three up and three down in the bottom of the first inning.

In the second and third inning both teams had nothing to show for after both got runners on first base but could not score them in the second frame and both went three up and three down in the third frame.

MTSU went three up and three down to start in the top of the fourth frame. WKU would score the first run of the game on a solo homerun by sophomore Jackson Gray. Senior Richard Constantine then reached second base on a throwing error by Lopez.

After a walk, Constantine then scored on an RBI single from graduate Davis Sims. Kennan then forced a ground out to leave both WKU runners stranded at first and second base on a call questioned by the whole WKU team. WKU led 2-0 after four innings of play.

In the top of the fifth frame, Stofel walked sophomore Brett Coker then Sullivan followed with a single to put MTSU runners on first and second base. After a ground out advanced the runners to second and third base, senior catcher Matt Phipps picked Coker off at third base to end the top of the fifth.

The Blue Raiders could not muster anything with three consecutive outs after redshirt junior Nathan Sanders singled to lead off the top of the sixth frame. Sophomore Matthew Meyer then led off with a single in the bottom of the sixth frame before advancing to third after a single.

Then Meyer tried to tag up from third base, but Sanders threw him out at home plate from center field. MTSU got out of the sixth inning after a Phipps fly out.

In the seventh inning, both teams made pitching changes as junior Ryan O’Connell relieved Stofel for WKU and junior D.J. Wright relieved Kennan. With one out in the top of the seventh frame, Meyer made an incredible diving catch at third base to steal a base hit.

Sullivan singled the next at bat then freshman Gabe Jennings batted him to cut the WKU lead 3-1 on an RBI double. Jennings was left stranded at second base after an O’Connell strikeout. In the bottom of the seventh, WKU could not retaliate.

After both teams had nothing to show for in the eighth inning, junior Bailey Sutton relieved O’Connell to close the game for WKU. WKU won the game 3-1 after a fly out to center field. Bailey picked up his third save of the season.

“It’s been a few weeks since we’ve seen that Bailey Sutton and when he’s like that there’s not many arms in this league that are that good, especially back end of the bullpen,” Wolgamot said.

Up next WKU will start an eight game road stretch starting with a four game series against the Southern Miss Golden Eagles that begins on Friday at 6 p.m.