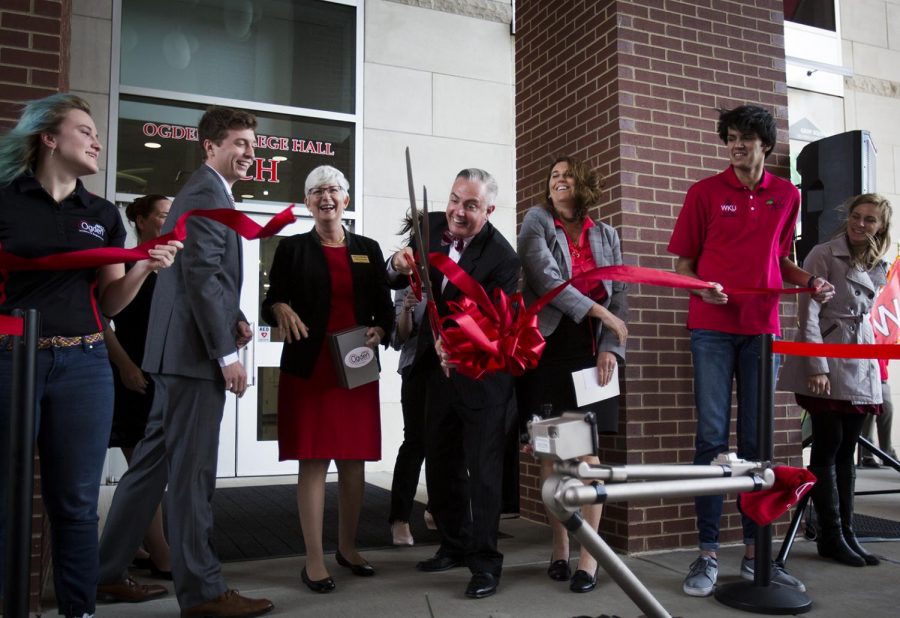 President Timothy Caboni cuts the ribbon for the dedication of Ogden College Hall, WKU's newest academic building on Monday. Construction for Ogden began in April of 2016 and was completed in time for the spring semester of 2018. The new building contains 36 laboratories and a 300 seat auditorium.

Ogden College Hall, WKU’s newest science building, was officially dedicated on Monday during a ribbon-cutting ceremony in front of the entrance of the building.

The new building was completed in December and opened for classes this semester after nearly two years of construction. The facility replaced Thompson Complex North Wing, which was demolished in 2015.

Cheryl Stevens, dean of Ogden College of Science and Engineering, said during the ceremony that the new building can never replace Thompson Complex North Wing and the memories students made there. She said instead, Ogden College Hall will allow new students to make new memories.

“Working on this project has been one of the highlights of my time at WKU,” Stevens said.

The $32.2 million building is about 80,000 square feet, Chief Facilities Officer Bryan Russell said. It includes an auditorium, the dean’s office and a student success center, Stevens said. It is connected to neighboring Snell Hall by a breezeway.

The state gave $48 million to WKU to use for the project, which includes renovating Thompson Complex Central Wing, Russell said.

Former-president Gary Ransdell said during the site’s groundbreaking ceremony in April 2016 that many years had gone into planning the renovation of the science campus. He said discussions about renovating the area began when he arrived in 1997 and the construction of the four-story building is phase IV of the plan to renovate the area.

The other three phases of the renovation of the science campus included the $20 million construction of the Engineering and Biological Sciences Building and the $33 million replacement of Snell, according to a spreadsheet of construction projects in the past 20 years. Hardin Planetarium and the Environmental Sciences and Technology Building were also renovated during the project.

Brownsville sophomore Dylan Skaggs said he wishes the building had been finished earlier when he was still taking science classes.

“I feel like it would have been nice to have [physics] in there,” Skaggs said as he waited for the ceremony to start.

WKU President Timothy Caboni said during the ceremony the new building reflects WKU’s dedication to a student centered, applied research university. He said the dedication was the first time he would see the new building, and he is excited for students and faculty to have the opportunity to collaborate and work together in Ogden College Hall.

“This is a great day for them and for all of us at WKU,” he said.

News reporter Emma Collins can be reached at 270-745-6011 and [email protected] Follow Emma on Twitter at @_mccain_emma_.