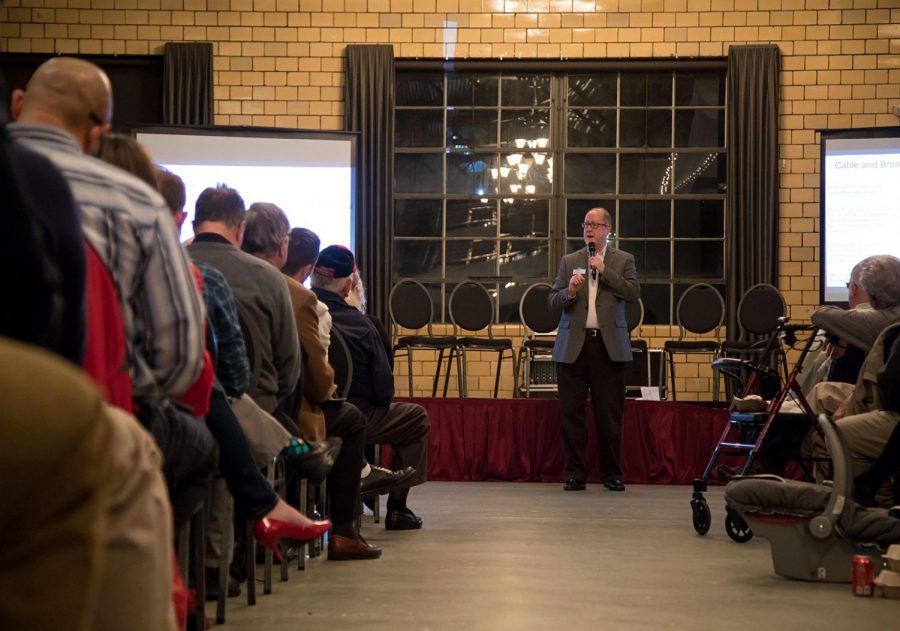 Mark Iverson, general manager of Bowling Green Municipal Utilities, speaks at the first Bowling Green Civic Assembly meeting on Feb. 22 at La Gala. Members of the community were invited to make suggestions and vote on ideas for improving the Bowling Green area.

The program provided a platform for the community to propose reforms for Warren County and the Bowling Green community. The town hall is part of the Bowling Green Civic Assembly, which is an approach to helping the community by “strengthening the feedback loops between citizens, civic groups, elected leaders and local media,” according to its webpage.

“This is the core mission of the Daily News–civic engagement,” Joe Imel, director of media operations at Bowling Green Daily News, said. “We report on the community more than anybody else.”

The assembly was created six months ago by community members Joe Imel, Sam Ford, Kim Mason and Laryn Hilderbandt. The goal of this assembly is to engage the community in making Bowling Green a better home for everyone.

Nearly 250 residents attended Thursday’s meeting. The gathering was the second stage of the three-part civic assembly.

The first stage was a virtual town hall meeting, which was conducted through an online survey developed by an open-source software company called Pol.is.

In the virtual survey, 2,025 members of the Bowling Green area were invited to vote and share statements concerning their community. A total of 225,450 votes were cast, and the analyzed statistics were presented at the face-to-face town hall meeting.

Ruby Thurman, 68, said she is thankful and appreciates this initiative the leaders of the community have undertaken.

The data collected by Pol.is indicated the community of Bowling Green is most concerned about increasing traffic, lack of competitive internet and cable rates, the Fairness Ordinance, arts in education and legalization of cannabis.

Laura Gilbert, 38, a resident, billboard business owner and interior designer, said she attended the meeting because she felt the need to learn more about the community.

“But, it’s not the major reasons I came here today,” Gilbert said. “I am very pro-pot.”

Gilbert said she feels marijuana can help build state revenues. Other than agreeing on legalization of cannabis, Gilbert also said she wanted to urge the community leaders to install a digital billboard to help advertise local business.

Joey Upchurch, 36, said he wanted to attend the meeting to raise concerns about the lack of electric car charge stations.

Tara Sorrels, 23, a recent WKU graduate, said she was excited to be part of the meeting because she feels the community can finally have the discussions they need to have.

After the display of the cumulative statistics, select community leaders were invited to address the issues raised in the survey. Traffic concerns and cable and internet rates were most highlighted in the community.

“Through Pol.is, we found the things we all agreed on and things that divide us,” Imel said. “Now, we have come together from the virtual town hall to a real town hall with stakeholders like the department of transportation, city and county superintendent, drug task force, police depart and [Bowling Green Municipal Utilities].”

Mark Iverson, general manager of Bowling Green Municipal Utilities, emphasized the fact that internet is the current platform of communication, education and entertainment.

The other speakers included Heath Ray from Community Action of South Kentucky, Tommy Loving of Warren County Drug Task Force, and Robert Clayton, Superintendent of the Warren County Schools, among others.

The meeting came to an end with a question and answer session. Members of the community raised more concerns and demanded solutions.

Attendee Obie Fugate, 54, said he did not get what he wanted out of the meeting.

“I came here thinking that we were not going to discuss politics,” Fugate said. “I was hoping for a discussion about jobs and creating them, while they spoke about traffic.”

Fugate was not the only one who felt their concerns were secondary. WKU international student, Apeksha Joshi, 26, said she would like the community to take actions in making the WKU campus and Warren County smoke-free.

“Everyone is here talking about traffic,” Joshi said. “Other than traffic, smoking is a bigger issue.”

Joshi also said that, as an international student, she doesn’t feel safe at times. Especially with the rampant text alerts from WKU police, Joshi said it now scares her to walk back home at night after work, which was another issue not addressed in the meeting.

Today, the Bowling Green Civic Assembly will meet again at La Gala from 2 to 4 p.m. for the third stage of the assembly: a workshop where the members of the community try to find solutions to the problems.