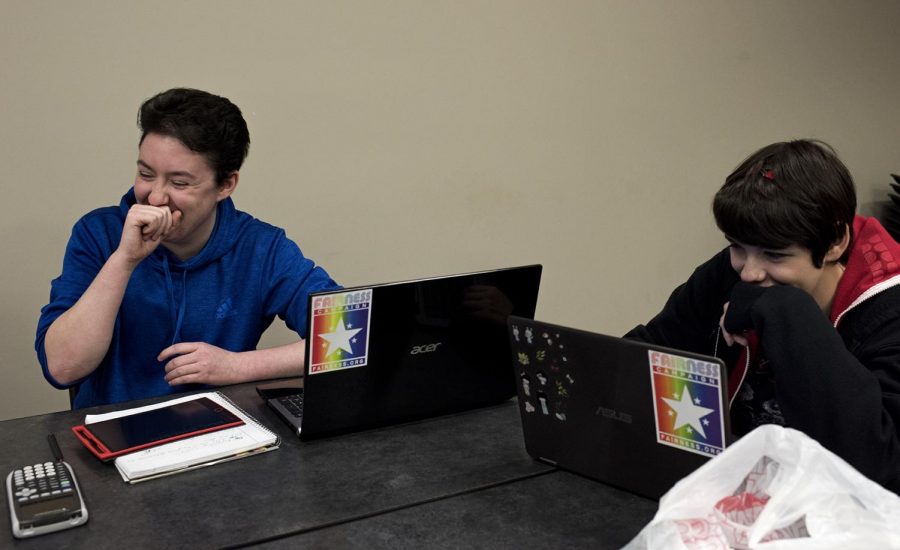 Junior Mark Clark and freshman Kat Tyler work in the new Pride Center relocated in Downing Student Union room 2084. Clark has been a part of the center since it first began two years ago. It's open to anyone looking for questions, outreach or a general safe space.

From a small room in Garrett Conference Center to a larger space closer to their parent organization, the WKU Intercultural Student Engagement Center, in Downing Student Union, LGBTQ students now have a new space to hold meetings, study or hang out with friends.

Beginning in the spring of 2017, the Pride Center was a place for students to have a common space that would meet their various needs. The center, which began without a location, then moved to Garrett Conference Center before its eventual home in DSU.

“We quickly outgrew the small space we had and realized moving would be the best option,” Campbellsville senior and Pride Center intern Jeremy McFarland said.

As an intern, McFarland has been preparing the new space for the Pride Center’s upcoming grand opening. A member of the Queer Student Union and the leader of the Transgender Non-Binary Student Group, McFarland has helped to organize speakers like Cleve Jones, an LGBTQ activist, to visit campus and has worked with WKU administrators on issues such as streamlining name changes and Title IX rights for LGBTQ students.

The new Pride Center, located in DSU room 2084, has several couches and chairs, a few computers and a table for students to work. There are also multiple posters and pamphlets around the room offering messages and reminders to students.

“It says a lot, being here,” McFarland said. “LGBT+ presence is an important part of campus, and being centrally located is a totally different experience.”

Collaboration with LGBTQ groups on campus is another large part of the Pride Center’s services, McFarland said. Their website lists links for the Queer Student Union, a LGBTQIA Support Group, and a link for resources for transgender WKU students.

“Every queer student benefits from the space and services offered at the Pride Center,” McFarland said.

The space is also across the hallway from the Intercultural Student Engagement Center (ISEC), which assists WKU with “recruitment, retention and graduation of underrepresented WKU students,” according to its website.

Another program the Intercultural Student Engagement Center offers is the ISEC Academy, which serves first-year WKU students identifying as students of color and first generation college students as a living-learning community and a support network.

In connection with the Pride Center, the Queer Student Union has hosted several movie nights open to all students on campus. Crestwood freshman Sabre Semrau helped organize these events, which have been going on since the fall 2017 semester.

Semrau said they put on 12 movie nights during the fall and hope to host even more this spring semester.

“We show queer movies that students might not have heard about or seen otherwise,” Semrau said.

The movie night scheduled for Feb. 9 was cancelled, but Semrau said the event was postponed to 7 p.m. Feb. 16.

The Queer Student Union will be showing the 1999 film “But I’m a Cheerleader.”

“This new location is good for everyone,” she said. “It really shows a growing presence on campus, and that’s nice to see.”