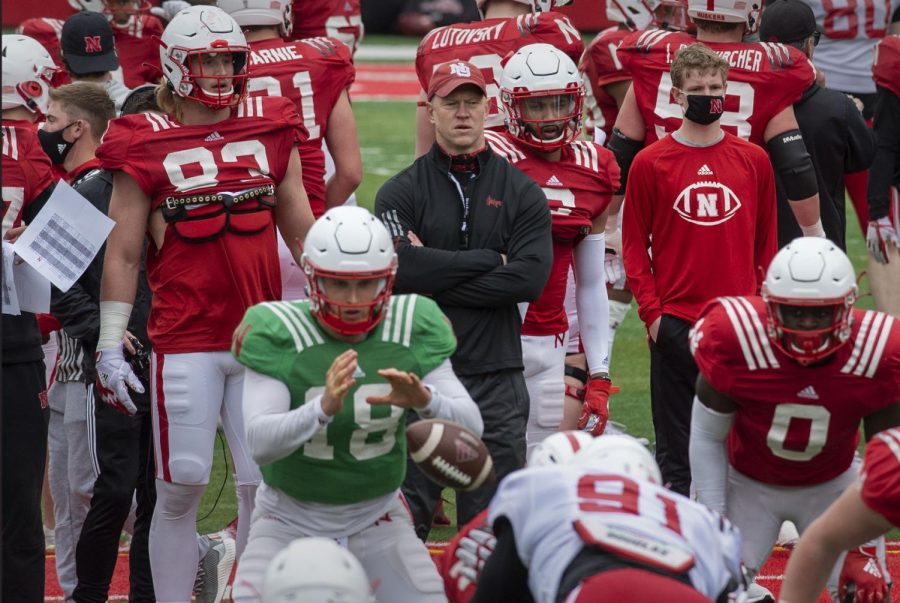 Nebraska head coach Scott Frost (top center) watches the action on Saturday during a practice at Memorial Stadium. Walk-on QB Matt Masker prepares to haul in a snap from center.

It was awfully nice to see Nebraska football fans back in Memorial Stadium.

The last time we saw an appreciable number of fans in the stands, Husker coach Scott Frost was juggling his quarterbacks — Adrian Martinez and some speedy little guy named Luke McCaffrey — late in a three-point loss to Iowa to end the 2019 season. The Hawkeyes’ kicker, Keith Duncan, blew kisses to the Husker sideline after making a game-winning field goal. Frost’s crew finished the season 5-7, then went 3-5 in last season’s pandemic world.

Which brings us to Saturday. Frost welcomed 3,200 mask-wearing fans to a nondescript spring practice. Although a total of 4,000 were allowed to attend, free of cost, 3,200 was a good showing. How many programs would draw 3,200 fans to a spring practice?

This was a good idea. Get the fans back involved. Get them revved up for the May 1 Red-White Spring Game. Get some good vibes flowing. Get some recruits in the house. Let everyone lay eyes on 6-foot-4, 225-pound wide receiver Omar Manning. Yeah, he was there, hauling in deep balls and signing autographs.

Frost suddenly has a crew of tall and fast wideouts that looks like it belongs in the SEC. Hello.

Seeing Manning reminded me of the first time I saw Husker defensive end Randy Gregory in a practice, in 2013. Gregory was so incredibly athletic that he almost looked out of place. You wanted to ask him if he missed a flight to Tuscaloosa.

At any rate, Nebraska fans on hand Saturday were able to take in plenty. Same with media. Local scribes hadn’t been invited to watch an entire Frost practice in his first three years in charge. Tom Osborne, Frank Solich, Bill Callahan, Bo Pelini and Mike Riley welcomed the media for entire practices at times. But this was a first for Frost. This was appreciated. This will spark conversation.

This seems like a good time for an interesting question.

So, the question: Is your anxiety more a result of what you’ve seen from the program in recent years, particularly the past three? Or is it mostly related to uncertainty regarding the program’s future, most notably the coming season?

There’s obviously differing points of view in this conversation. My dad is in his late 70s. He wonders aloud whether Nebraska will become a national power again in his lifetime. I’ve heard other folks wonder the same. Can Frost, 12-20 at his alma mater, get his operation moving in the right direction in the next couple of years?

Fans rightfully want to know if the operation is making discernible progress.

Well, we got a close look Saturday. It helped. There’s no doubt Frost has improved size and athleticism throughout most of the roster. Oh, it’s a long way from being Ohio State or Oklahoma. But it’s better than it was four years ago. Is Nebraska good enough to challenge for first place in the Big Ten West Division? Frost thinks so. But you know Frost, always expressing confidence. What a horrible trait for a guy.

His defense should be strong. Top 30 strong. Based on past performance, you have to wonder about special teams, but you see good signs there — like new special-teams coordinator Mike Dawson barking orders at midfield, clearly in command, and Cam Taylor-Britt speeding upfield as a kickoff return man. That looked real good.

Nobody would’ve guessed in late 2017 that entering Frost’s fourth season at NU, his offense would be the biggest question mark.

Did I mention his receiver corps had fans buzzing? They cheered when Manning leaped high over a defender to snare a deep ball from backup quarterback Logan Smothers. When you see Manning lined up with fellow transfer Samori Toure (6-3, 190) and second-year freshman Zavier Betts (6-2, 200), you understand why Frost in January told reporters, “It’s for sure the most talented receiver group we’ve started an offseason with.”

Guess what? Junior wideout Oliver Martin (five catches last season in his first year in the program) might be the best of the bunch.

With three-year starter Adrian Martinez playing behind a line with ample experience, the passing game seemingly has ample potential, even deep-ball potential. Imagine that. Sure, you didn’t always see receivers getting a lot of separation. But, remember, Nebraska has an excellent secondary, led by Taylor-Britt at corner and a host of rangy and tough safeties.

There was a lot to like about Frost’s crew. Perhaps you noticed Heinrich Haarberg’s strong right arm (and accuracy).

But there was just enough that left you wondering where this is all headed.

Transfer running back Markese Stepp (6-0, 235) wheeled around with his left leg propped up on a push scooter. He wore a walking boot. Scholarship running backs Rahmir Johnson, Sevion Morrison and Gabe Ervin also were spectators. There were a few too many players for my liking sitting this one out.

It’s probably nothing for Husker fans to agonize about. It just raises anxiety is all.