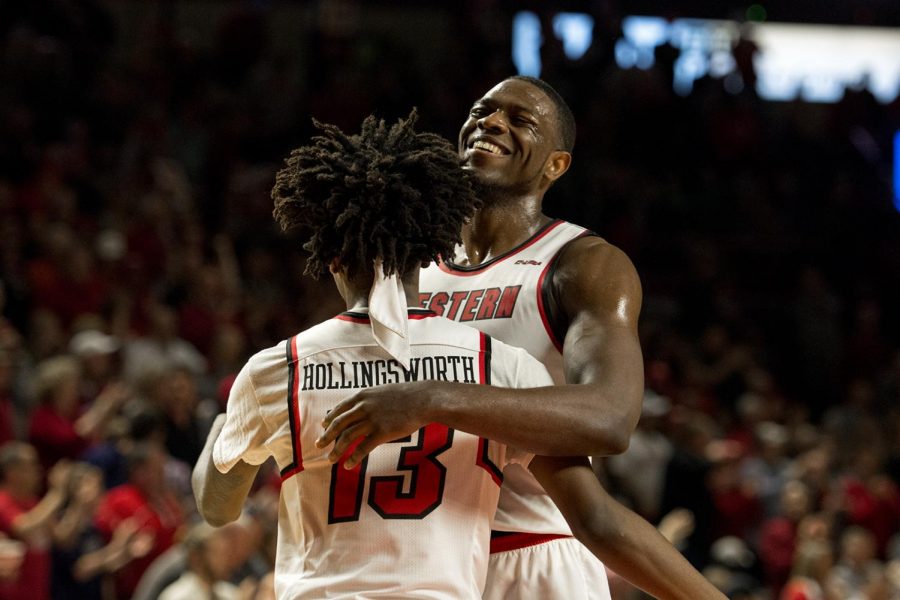 The WKU men’s basketball team avoided an upset on Thursday night at Texas-El Paso, but freshman guard Taveion Hollingsworth hit five 3-pointers in the second half to help WKU escape.

The Hilltoppers trailed by four early in the second half, but Hollingsworth made sure there would be no upset. The Lexington native scored 17 points (15 in the 2nd half) to give WKU a much needed spark and help the Hilltoppers to a 72-60 victory over the Miners. Senior forward Justin Johnson scored 20 points and grabbed 12 rebounds to help lead WKU.

“When you on the road, its never easy,” head coach Rick Stansbury said in a postgame radio interview. “It was a grind. You look at it on paper and would think it was an easy win. It wasn’t an easy win.”

The heavily favored Hilltoppers won the tip and graduate transfer guard Darius Thompson found Johnson for a quick bucket to get things going. UTEP guard Omega Harris answered with a quick 3-pointer to begin a back and forth battle in the first half. WKU built a 24-19 lead after a Johnson 3-pointer, but that would be the biggest lead the Hilltoppers would build for the rest of the half. UTEP’s Keith Frazier would answer back with a 3-pointer to spark a 13-6 run to end the first half as UTEP led WKU 32-30 at the half. It was just the second time the Hilltoppers trailed at half in Conference USA play this season.

“In the first half they outworked us,” Stansbury said. “They beat us to every loose ball. They were more energetic. We did a poor job consistently getting the ball inside. We were fortunate to only be down two.”

With the Miners doubling Johnson and graduate transfer forward Dwight Coleby down low, a guard needed to step up for WKU to find their groove. Hollingsworth stepped into that role, knocking down two 3-pointers to begin the second half to help give WKU a 36-34 lead. Harris once again answered with a jumper to tie the game and spark an 8-2 run that gave the Miners a 42-38 lead. Hollingsworth’s third 3-pointer cut the lead to one and swayed the momentum back into WKU’s favor. The shot from deep sparked a 13-2 run to give WKU a 51-44 lead.

“Justin and Dwight were getting doubled hard underneath,” Hollingsworth said. “When I was open in the corner they found me. We all share the ball. Nobody is selfish. When somebody is on, they keep getting the ball.”

It appeared the Hilltoppers may have finally found a way to pull away from the Miners, but a Harris jumper gave UTEP a 53-51 lead with 8:46 to play. Harris finished the game with 16 points for the Miners. Hollingsworth’s final 3-pointer gave WKU a 54-53 lead, a lead they would not surrender. The Hilltoppers stretched out a seven point lead and UTEP never got closer than four points the rest of the way. Johnson and Coleby both had slam dunks in the final minute to put down an exclamation point as WKU held on for a 72-60 victory.