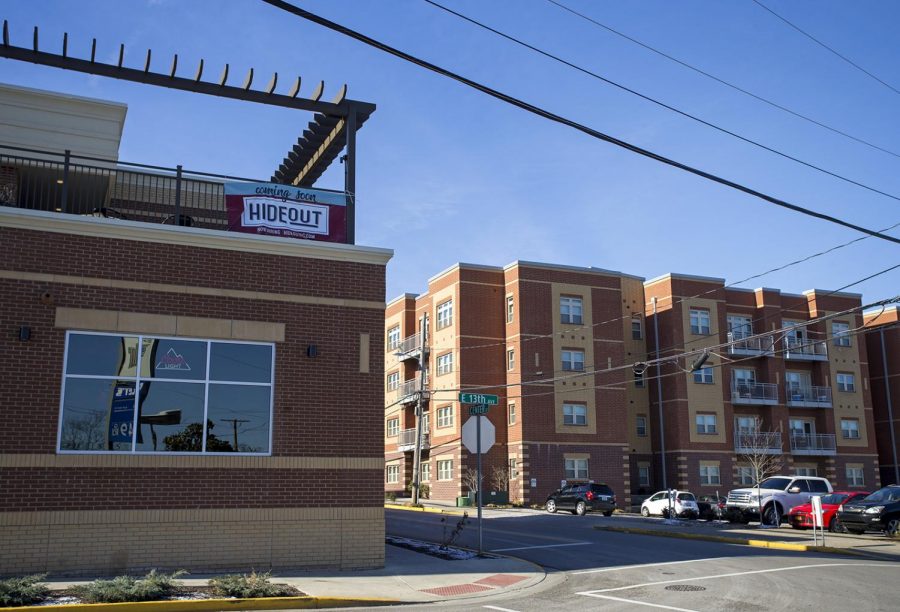 Hideout, Bowling Green's newest bar, will be moving in to the previous sight of High Tops on Center Street. Hideout will open Feb. 2.

It’s always exciting for the Bowling Green community when a new bar will be opening up in close proximity to WKU’s main campus.

After the sudden closing of High Tops, a sports bar, Hideout opened in the same location as the previous business.

Bill Sullivan, director of Food Services for Hideout, has been helping the business renovate and set up for its opening. Sullivan said the intention of Hideout is to sell food and beverages at reasonable prices.

“I’ve been in the food service for a long time,” Sullivan said. “I believe we can do food right.”

Sullivan said that he was brought in from out-of-state by the same housing group that owns the Midtown Apartments, including the building on Center Street that Hideout is located in.

Before the end of 2017, High Tops closed suddenly. Many rumors surround the situation because there was no statement released or coverage of the closing, but Sullivan said there is new management and things will be done very differently.

Sullivan said many parts of the sports bar have been redone, including the menu, bathrooms, bar and tap wall. He said the tap wall will have 47 taps with domestic, craft beers and two taps for wine.

“We just want to have a clean, fun environment,” Sullivan said. “I think that’s what we are building.”

Staff will wear red on WKU game days and the menu has been made with students in mind, Sullivan said.

Sullivan said that when choosing the name for the business, he and his staff were just coming up with names. He said they had a few choices, but ended up really liking “Hideout.”

Sullivan said he also hopes to see the business not only be college student-friendly, but also family-friendly.

Hideout Service Manager Sarah Jackson said she is excited for the opportunity that Hideout has with the Bowling Green community.

“We want people to come in here and feel invited and welcome,” Jackson said.

Jackson said she sees her position at Hideout as a way to give back to the Bowling Green community. She said that there are a lot of unknowns surrounding the previous business, but she is excited that Hideout has a new staff and support system, particularly from Bill Sullivan.

“Bill has got great ideas and is very knowledgeable with what he does,” Jackson said.

Jackson said she’s also excited for all the new customers, including the WKU student body, and that she’s excited to “see all the new faces come in.”

Jackson said she thinks the reputation that High Tops developed won’t really affect what the Hideout will be doing.

“We’re hoping that when people come in here, they know it’s completely different,” she said.

According to the Hideout menu, which is still being finalized, there will be daily specials with tacos, burgers, and pizzas all starting at $1.

“We know students don’t always have a whole lot of money, so we made our menu with that in mind,” Sullivan said.

Specials for WKU students and military personnel are also in the works, but nothing is “set in stone,” Jackson said.

WKU Junior Chris Lau, a resident of the Midtown apartments, said High Tops closing suddenly was a shock to him because he saw that the sports bar was usually busy.

“Seeing it close was kind of a surprise,” Lau said.

“I like the food a little more and I think it will be more successful as a restaurant,” Lau said. “I also think it would be cool if they did DJ and live music nights for students.”

Lau said that although he is excited for Hideout, he doesn’t really get where the name came from. He said that they could have chosen something that had more to do with WKU since they are close to campus.

Hideout opened to the public on Feb. 2, just in time for Superbowl Sunday.