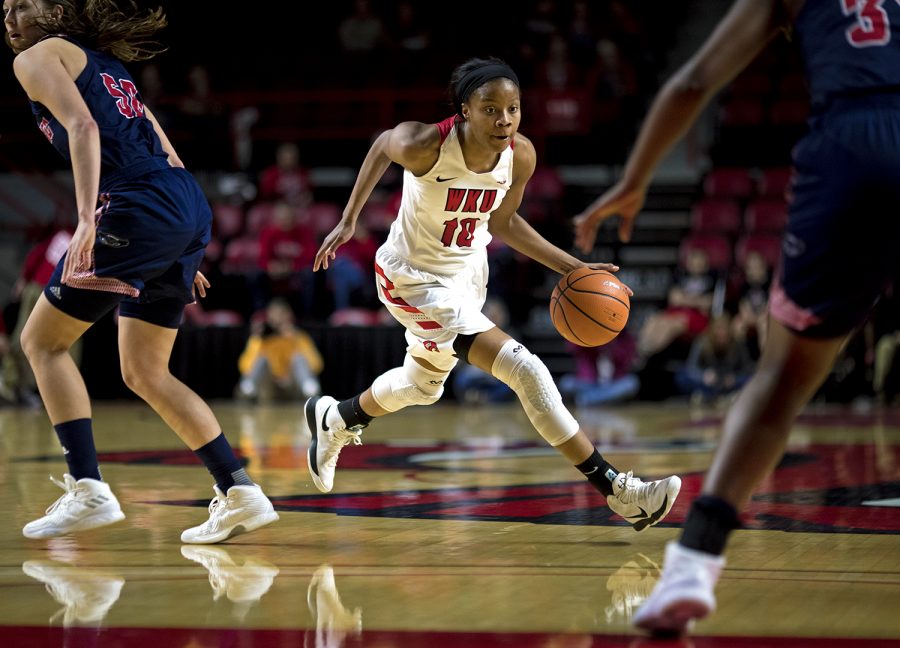 WKU Forward Tashia Brown (10) drives the ball during the Lady Toppers 82-63 win over Florida Atlantic on Feb. 3 at Diddle Arena. Brown lead the team in scoring with 25 points.

Behind a dominating second quarter – one that included a momentum swinging 23-0 run – the WKU women’s basketball team cruised to an 82-63 win over Florida Atlantic on Saturday in its first game in Diddle Arena since Jan. 18.

The Lady Toppers (17-5, 8-1 Conference USA) were tested early, as FAU held multiple leads throughout the opening quarter, but took total control over the course of the next eight minutes to put the Owls away and win their fifth straight game and 16th consecutive home conference game.

“I think the most important thing is that we had an unbelievable second quarter,” WKU head coach Michelle Clark-Heard said. “We always talk about defense leads to offense, and I think that’s what happened in the second quarter. This is still a young group and we’re still learning every single day to come out and prepare the way that we need to.”

Tashia Brown led WKU with a double-double of 25 points and 11 rebounds, while Ivy Brown finished with 14 and 16 for her 11th double-double of the season. Raneem Elgedawy added 15 and eight.

The Lady Toppers shot 42 percent (33-of-79) from the field and forced FAU into 21 turnovers, which turned into 36 points at the other end of the court.

“It was really nice,” Ivy Brown said of being back home. “We had a really good crowd today and I was really glad to see everyone come out. Just to play in front of your home fans is always an energy boost.”

FAU came out and proved themselves early. After WKU tied it at 4-4, the Owls used a quick 5-0 run to take a 9-4 lead at the 7:10 mark of the first quarter. A rebound and putback by Tashia gave the Lady Toppers a 10-9 lead, but back-to-back layups from Malia Kency put FAU back up 13-10 with three minutes remaining in the period.

“It was a tight ballgame in the first quarter and then we turned up the pressure a little bit,” Clark-Heard said. “I was really proud of our group to be able to convert off those turnovers and get the momentum going, and I think that’s when the game shifted.”

WKU took control in the ensuing quarter. Whitney Creech’s jumper at the 7:00 mark of the second moved WKU’s advantage to 27-22, but FAU responded with a big 3-pointer to cut its deficit to just two. The Lady Toppers then answered with a quick 9-0 surge to build a 36-25 lead – their largest of the afternoon – with under four minutes left in the first half.

That 9-0 run turned into a 23-0 burst and sent WKU into the locker room holding a commanding 53-32 advantage. The Lady Toppers shot 51 percent from the field in the opening half and forced 14 turnovers.

“I think that was huge,” Ivy Brown said. “We started off a little slow in the first quarter, but to get that 23-0 run, I think it contributes a lot to our defense. We were really aggressive that second quarter and picked it up full-court, and that turned into a lot of transition points for us.”

WKU opened the second half with back-to-back Ivy Brown 3-pointer – and it continued to put FAU into a deeper hole from there.

“I think what it shows for a coaching staff is that we’re finally putting things together,” Clark-Heard said. “As we come out of those huddles and we talk to them, they’re taking what we talk about in the huddle and putting it on the floor.”

Taking a comfortable 69-46 advantage into the fourth, WKU was able to cruise through the final eight minutes and record its fifth straight victory.

“When we play defense together like that, it’s because everyone’s rotating and helping each other, and that’s what you’re supposed to do when you’re a team,” Bopp said.

The Lady Toppers return to action on Thursday at 5:30 p.m. as they host Old Dominion in Diddle Arena.