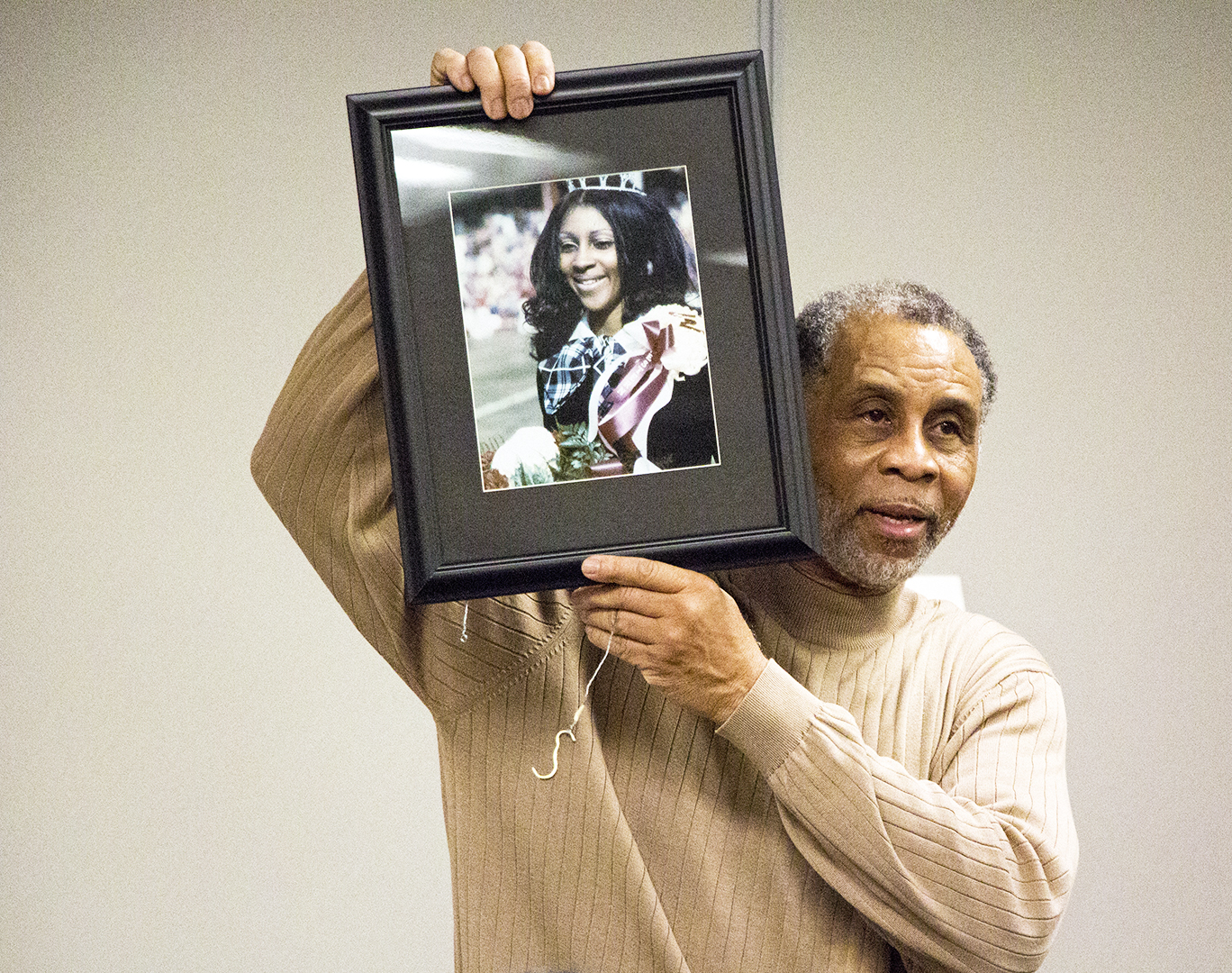 Don Offutt, who was born where Houchens-Smith Stadium currently stands, lectures on Feb. 8, 2018 at the Bob Kirby Library. The lecture explored the history of Jonestown, a town that existed near the Southwest part of campus.

Bowling Green native Don Offutt, 70, has been deeply intertwined with the African-American community for his entire life, and now his ultimate goal is to make sure that his people’s culture will never be forgotten.

Offutt was born in the Shake Rag community in his grandmother’s house. At the time, segregation did not allow black people to use medical facilities, so doctors had to come into homes and deliver babies there.

Despite hardships, Offutt said Shake Rag, a black neighborhood in Bowling Green that rose to prominence following the conclusion of the Civil War, was actually very lucky.

“Bowling Green was one of the fortunate cities that sat on a primary road between Louisville and Nashville,” Offutt said. “The black community in Bowling Green had one of the prime areas to develop since there was major traffic going north and south. Before 31-W existed, you could not get anywhere without coming through State Street.”

As far back as first and second grade, Offutt said he was groomed to pursue his own excellence by the elders in his life. Offutt said that he and some of his classmates were instructed to read poems before school programs as part of a special selection process. To him, this was an example of the critical role black women have always played in the survival of the black community.

“Once you were identified by the old ladies, you got chosen to be somebody,” Offutt said about his youth. “If you had those old ladies lay their hands on you, you were going to do something special because they wouldn’t see it any other way.”

During his time at High Street High School, Offutt was the captain of the track and football teams. Segregation prevented most High Street athletic squads from competing against whites, and it also caused all of the black students within a 20-mile radius of Bowling Green to attend the same high school. Offutt said that reality actually helped contribute to the deep sense of camaraderie in Shake Rag.

“If you lost the football game because you dropped a pass, you didn’t want to go to the barber shop to get your haircut for the next week because you’d hear about it,” he said. “On Sunday at church the preacher would say, ‘The Lord’s going to bless wide receivers with better hands.’ If you walked in to get a hamburger, you’d hear ‘If I give you this, don’t let it drop out of your hands,’ but that type of tightness is what drove the black community.”

Offutt was also successful in the classroom, and he was named valedictorian of his senior class in 1965. After graduation, he received a scholarship to attend Kentucky State University, a historically black college. However, the school did not have much money to provide for him, and so he was forced to transfer to WKU after only one year away from Bowling Green.

“Coming back to Western was one of those interestingly good, serendipitous kind of positive things,” Offutt said. “Having gone to a [historically black college], what you learn about who you are and what you’re capable of doing is never in question. Bowling Green is home, and that provided impetus to make some changes there.”

The changes Offutt sought to bring to WKU were immediate, as he and fellow student Larry Ashby founded the Omega Psi Phi fraternity in December 1968. Offutt said the organization was the first black fraternity on a white campus in the slave-holding south, and it represented progress for the university’s African-American students.

“When we came, there was absolutely no black organization on Western’s campus,” Offutt said. “The school only had a few years of black folk really coming there, so they may have had 100 black students. The monument we put near Van Meter Hall and the old Kissing Bridge to commemorate our founding is still very important to me.”

Offutt graduated from WKU in 1969. From there, he worked various jobs, including serving in the National Guard, before settling on a teaching career. He taught at many schools, but his longest-tenured position was as a professor in the College of Education at Kentucky State University from 1992 until his retirement in 2006. In addition to teaching, Offutt has received two different master’s degrees and is currently working on his doctorate from the University of Kentucky.

Since retiring, Offutt has been devoted to the African American Museum in Bowling Green. He said he drives to Bowling Green from his home in Lexington multiple days per week in order to volunteer and do speaking arrangements. Though the museum’s physical location at 1783 Chestnut St. is relatively new, the ideas behind it are not.

“About five of us actually started planning museum concepts as far back as the mid-’90s,” Offutt said. “We all went to the same high school, and we all wanted to maintain that life because we were all born in the same area. The preservation of our history and culture has been something that we have done for a long time because our dads and grandfathers were activists in the community before us.”

Howard Bailey, former vice president for Student Affairs at WKU and African American Museum board member, said he has known Offutt since the two were both students. After his retirement in 2015, Bailey has become more involved in the museum, and the two have bonded as a result.

“I always say that Don’s got more stamina than me because at 70 years old, he’s going to get his doctorate,” Bailey said when asked about his lifelong acquaintance. “We have always been friends, but we reconnected on our interest here in the museum.”

Offutt has many reasons to be invested in the museum, but he said a key one is to educate people and remove what he calls “mythological information” from the minds of the masses. For example, Offutt is quick to remind people that the Civil War was not about freeing slaves, but about black people freeing themselves and taking control of their own destinies once they had the chance to do so.

“Those folks contributed to their own freedom; no one ever really gave them anything,” Offutt said. “Many of the people in the Bowling Green area had been enslaved, so that’s where a lot of the energy for those communities came from. Even in the difficult times that they faced, there was the concept to self-define and self-determine their fates.”

WKU senior Erian Bradley was not aware that the African American Museum existed. She said she believes it should be showcased and advertised around campus, especially during Black History Month.

“I’m pretty sure if people knew about it, they would go see it,” Bradley said. “We only get 28 days of black history, so there should be as much promotion as possible.”

Offutt said he owes his identity to his hometown, and his mission in life moving forward is not just to show that there were great people and things going on in Bowling Green’s African-American communities, but to also preserve their memories and artifacts.

“I have been married 47 years, and I have two children and a grandson,” Offutt said. “I want the grandchildren that I’ll see and the grandchildren that I’ll never see to be able to go somewhere and read something about where old Papa came from and why he was what he was. It’s all about understanding the importance of ancestors and honoring the people who walked this journey before us.”