WKU gets record-setting performances, underclassman contributions in win over FIU 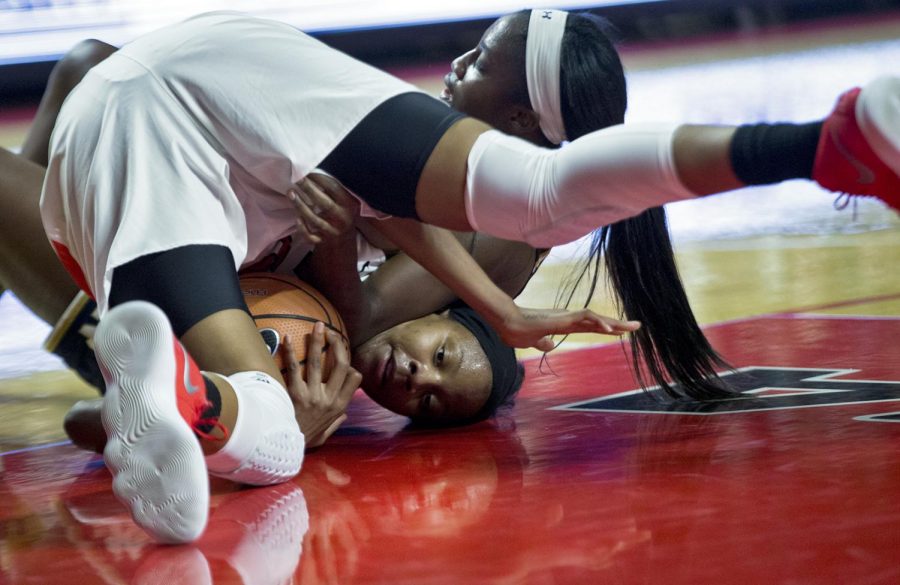 WKU senior forward Tashia Brown (10) wrestles for the ball with an opposing player during their game against Notre Dame on Tuesday Nov 14, 2017 in EA Diddle Arena. The Lady Toppers lost 78-65.

In its 101-47 blowout of Conference USA opponent Florida International on Thursday, WKU added many new names and numbers to its record book.

To begin, the 101 points scored by WKU were the most in a game under sixth-year head coach Michelle Clark-Heard. The Lady Toppers’ 54-point win was also the largest margin of victory ever in a women’s C-USA game.

“It feels pretty good. I’m really happy for our players,” Clark-Heard said following WKU’s lopsided win. “I’m constantly on them and constantly pushing because I want to be able to have games like this so they can have fun and different people can step up and understand and know how good they can be. There was so many people that did a lot of great things for us.”

Freshman forward Raneem Elgedawy scored 13 points and pulled down a career-high 23 rebounds, which were the most by an underclassmen in the country this season. It also tied a C-USA single-game record.

Alongside Elgedawy, redshirt sophomore guard Dee Givens earned her first career double-double with 16 points and 10 rebounds. She has also now scored in double figures in six games this year.

Known for her sharpshooting, Givens also played well defensively for WKU on Thursday as she tallied four steals – and that’s what her teammates expect from her.

“I think she was big again for us,” Brown said of Givens. “Dee started out on defense and then let offense carry over it. She rebounded huge and we need another person like that to rebound for us. For her to come in and do that, we just need her to carry that over and be consistent in the rest of the games as well.”

Lastly, freshman guard Sherry Porter scored 13 points for the Lady Toppers, her most in a conference game thus far. Along with scoring in double digits, Porter dished out four assists, grabbed three rebounds and had a steal in 24 minutes of action.

Porter got going early, as she knocked down two mid-range jumpers to give WKU a quick 4-0 lead in the first quarter to help set the momentum for the Lady Toppers.

“Coach has really been encouraging me to take pride in offense like I’ve been doing in defense, so I think that showed pretty well tonight,” Porter said. “That’s what I’ve been trying to do and it showed.”

Now, WKU hopes that it’ll continue to perform at the level it has been and kept earning spark from its underclassmen, especially with a tough road trip upcoming.

After closing their four-game homestand with four straight wins, the Lady Toppers now venture away from Diddle Arena for the first time in conference play this season with a trip to Alabama-Birmingham. The two will play on Saturday at 6:30 p.m.

WKU is a perfect 5-0 against UAB since joining C-USA prior to the 2014-15 season, but the Blazers are currently 7-0 in Bartow Arena this year.