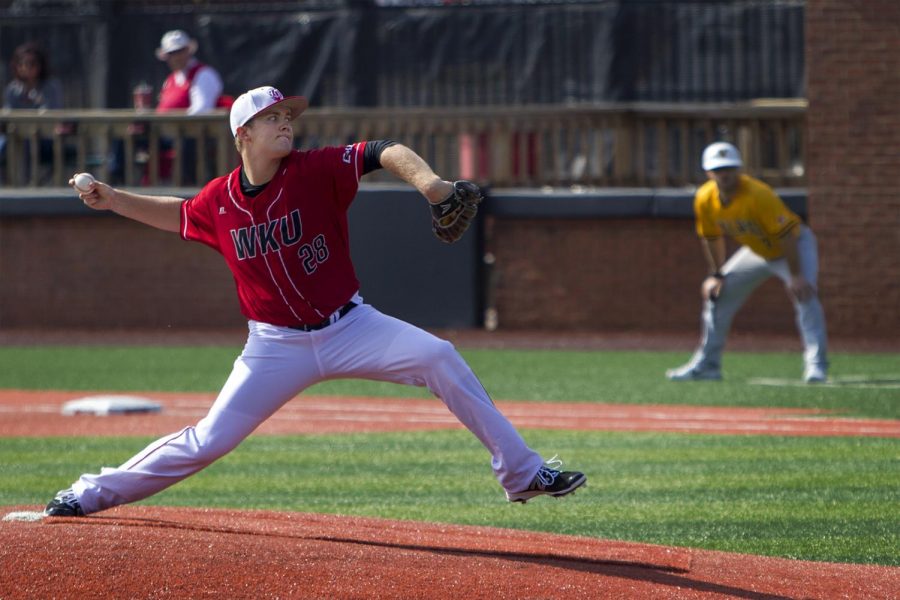 Junior pitcher Paul Kirkpatrick led Hilltoppers on Sunday Feb. 19, 2017 pitching 4.1 innings and getting two strikeouts. WKU fell 2-5 to Valparaiso in their first loss of the season.

WKU senior pitcher Paul Kirkpatrick was arrested early Sunday morning for drunken driving, according to a police report obtained by the Herald.

Kirkpatrick was arrested at 1:03 a.m. Sunday on three charges: drunken driving, reckless driving and failure to or improper signal. After consenting to a breath test, Kirkpatrick recorded a .093, above the legal limit of .080, according to the police report.

Police witnessed Kirkpatrick “accelerate at a high rate of speed” on East 13th Ave and then come to a quick stop several times, according to the police report.

“Paul continued to accelerate at a high rate of speed from a stop each time and then decelerate very quickly multiple times through the entire block of East 13th Ave.,” the officer said in the citation report.

Kirkpatrick admitted to having had “a few beers” earlier in the night, but resisted a field sobriety test. After eventually agreeing, he showed six total clues of being under the influence, according to the report.

The WKU pitcher is set to enter his second season of play for the Hilltoppers.

“We take this incident very seriously and will uphold our standard of excellence as a priority in our program,” the baseball program said in a statement. “A bad decision was made and we will continue to work and educate our student-athletes on life lessons beyond the playing field.”

Kirkpatrick played his first season with WKU baseball in 2017. He started every weekend series for WKU in his junior year. He had a 7.55 ERA and a 2-9 record in 14 appearances. He had one complete game and totaled 70.1 innings pitched.