‘Wynonna Earp’ Stars on Nicole’s Pledge to Waverly, That Twist for Doc and More 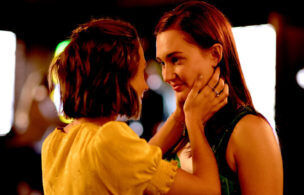 In the penultimate episode of the series’ Syfy run, demon hunter Wynonna Earp (Melanie Scrofano) and Sheriff Nicole Haught (Katherine Barrell) almost have to say goodbye to two people they love. But rather than this be the end for half-angel (turned dark angel) Waverly Earp (Dominique Provost-Chalkley) and gunslinger (and vampire) Doc Holliday (Tim Rozon), there’s a chance for new beginnings for pretty much everyone. Wynonna Earp is going out with a bang. Would we have it any other way? See Also‘Wynonna Earp’ Stars on That Major Waverly Twist and the Intervention for Wynonna
Melanie Scrofano and Katherine Barrell break down ‘Life Turned Her That Way.’

Picking up where we left off in “Life Turned Her That Way,” Waverly’s dark angel self is ready to wreak havoc — and her sister Wynonna and fiancée Nicole are both ready to step in and help. But the Earp-hating Clantons (despite there being few of them left) aren’t done hurting their enemies and Cleo (Savannah Basely) performs a spell that turns Doc — also hated by the family for the O.K. Corral back in the 1800s — into her puppet.

With Doc possessed and the Clanton heir, he and Wynonna must face off. But, as he’d expected something might happen, Doc loaded his gun with the wrong bullets so it backfires and he‘s the one lying on the ground, bleeding out.

Who comes to his rescue? And how does Nicole stop dark angel Waverly from leaving behind her loved ones to go into the garden to close the gate and protect the Ghost River Triangle? Read on as we break it down with Scrofano, Barrell, and Rozon.

An Easy Decision for the Rest of Her Life

As dark angel Waverly prepares to return to the garden, Nicole stops her and pledges to extend her watch as sheriff of Purgatory to all of the Ghost River Triangle, in every realm, to be the guardian for the supernatural and humans. 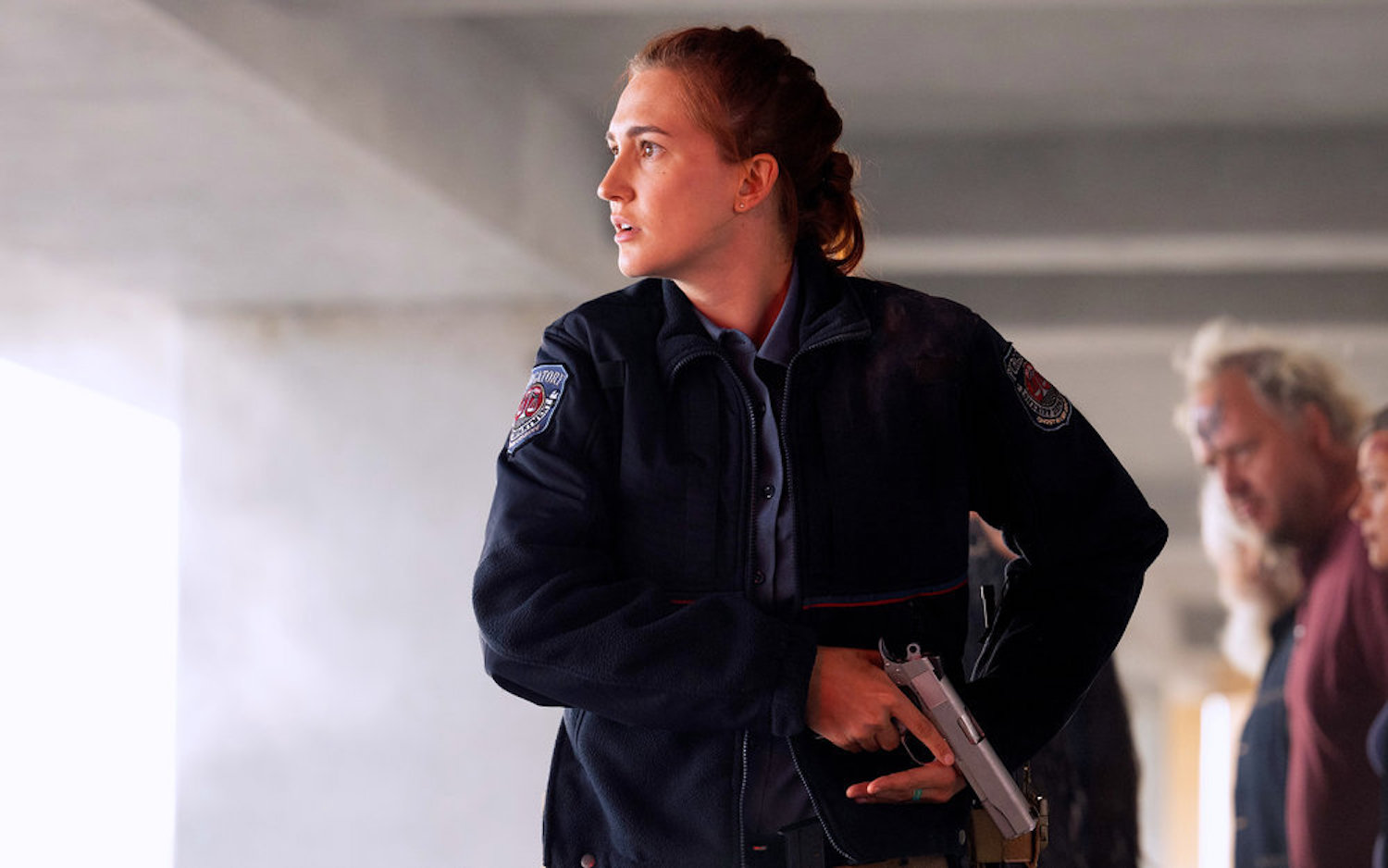 “You’d sacrifice your life to become the shield?” dark angel Waverly asks, and Nicole confirms: “Every day to the end of eternity if it meant keeping you safe.” With that, she becomes the angel’s shield — her neck is even marked —and is bound to the Ghost River Triangle. Most importantly, Waverly is Waverly again.

“For Nicole, it was a very easy decision after everything they’ve gone through. Of course she would agree to that to be with the love of her life,” Barrell tells TV Insider. “I don’t think there was any part of Nicole that would have hesitated. She would make that decision over and over again.”

Before that, dark angel Waverly heals Doc (for Wynonna, in exchange for letting her go and the book Waverly stole from the garden at the beginning of the season). And as everyone discovers after, he’s no longer a vampire! “It’s just another part of a chapter of him letting go [of the past]. He couldn’t hold onto that forever,” Rozon says. “In many ways, he became a vampire for a beautiful reason: to protect [his daughter] Alice in case something happened to Wynonna. At least Doc would have some sort of power to protect her.” The immortality didn’t matter as much to him, not after all the time he’s been alive.

For Wynonna, having Doc be de-vamped makes her “hopeful” for their future together (the exes have a very complicated history), Scrofano says. “It could be interpreted by Wynonna that he chose love — she accused him of being so selfish by becoming a vampire. I think to choose to be human means a lot to her, that maybe he considered what she had felt and did something to fix it.”

But it’s “also scary because now he’s vulnerable, now he can be taken away at any minute because he’s mortal again,” she adds. “A fresh guard goes up.”

Doc’s focus, however, is very much to “maybe go find [Alice],” Rozon shares. “He’s done with the past, with [best friend] Wyatt Earp, and if he has to be, he’s done with Wynonna.” That being said, he continues, “in my personal opinion, Doc would always prefer a future with Wynonna in it and believes it’s possible.”

It’s as Wynonna, Waverly, Nicole, Doc, and Jeremy (Varun Saranga) are sitting at the bar in Shorty’s at the end of the episode, getting a much-needed break, that the former vampire sees he has a reflection and realizes he’s human again. It’s also in that scene that poor Nicole tries her hardest to get her friends and fiancée to talk about planning the wedding.

In doing so, she does interrupt Wynonna and Doc’s moment as the demon hunter piles blankets on top of him. “I felt so bad shooting that scene because I wanted to see Wynonna and Doc make up, kiss,” Barrell admits. “I hated Nicole for interrupting that. I wish Wynonna and Doc could’ve had that moment.” But who could blame Nicole for wanting to make sure the wedding happens? And to do that, they do have to talk about it, considering the lull like the one they have — after taking care of dark angel Waverly, Cleo driving off, and the secret government agency Black Badge maybe only retreating from the area for now — may not last for long.

“Nicole’s worried about something going wrong,” Barrell explains. “Nicole has this interesting relationship with PDA — she’s not 100 percent comfortable. It’s a vulnerability thing for her and an image thing for her, where she feels like she needs to maintain a professional exterior. … It’s really nice for her to finally say, ‘OK, I feel like we can safely do this and have the day we want.’”

Nicole and Waverly aren’t the only ones who need that lull to make their wedding (hopefully) happen. Wynonna has one emotional bombshell after another dropped on her in the penultimate episode: dark angel Waverly, facing off with “Doc,” Doc dying, dark angel Waverly saving him, and thinking she’s going to lose her sister before Nicole saves her. “She definitely needs a vacation,” Scrofano agrees about her character. “It was just so tragic. That was one of the reasons I couldn’t get through the read-through without crying. By letting Waverly go, at least Waverly survives. It’s such a Sophie’s choice. She has to choose Doc’s survival but then she sacrifices her Waverly for this other version of Waverly, but if she chooses Waverly, then she sacrifices Doc. I think she made the best choice she could under the circumstances.

“How many challenges can a person face before they really start to get worn down and go, ‘I have nothing left’? ‘The world just wants to take, take, take, and when is it going to be my chance to have something just given to me without strings attached?’” she continues.

Wynonna vs. (Not Really) Doc

The scene in which Wynonna and “Doc” face off was one both Scrofano and Rozon wanted to make sure they got right.

“That was really difficult to shoot. That took all day. It was such an important scene and we both knew how epic it was,” Scrofano recalls. “I certainly felt a pressure to not drop the ball. This scene, when we did it in the read-through, I was weeping. I was screaming. When we shot it, I was so scared of screwing it up because it was so beautifully written and just so compelling and I think because of how much [Tim and I] both love [our characters], we really wanted to do right by [them].” Rozon makes sure to credit director and co-executive producer Paolo Barzman for using a crane for that scene. “Not only were the emotions there but it was even easier and tragically sadder to play it because it was so intense just with Melanie,” the actor explains. “You couldn’t feel anybody else around you.”

“I remember asking, ‘Why Doc? Why does it have to be Doc doing this?’” he shares. “I believe it was Paolo who told me, ‘It’s because he’s such a great adversary. You need someone who could actually be an adversary for Wynonna, so take it as a compliment. Maybe he could be a threat.’”

And for Rozon, as he says he’s told creator Emily Andras, it’s his favorite scene and writing “because it ties everything together, from the character development from Episode 1 [for Doc]. Just what a gift of a character and to take him on this journey of growth.”

And now all that’s left is to see how it all ends. If this emotional roller coaster of an episode is any indication, Earpers, we’re not ready.