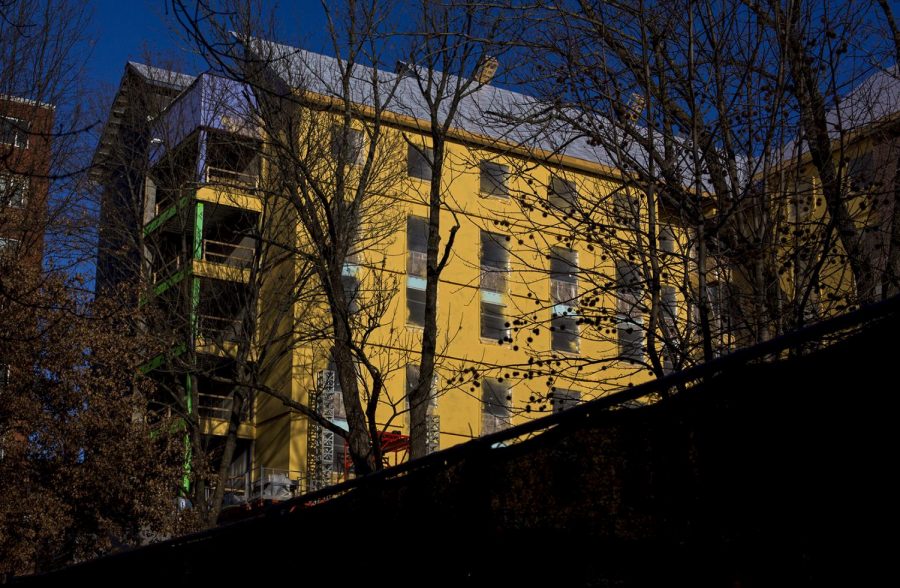 The Student Life Foundation is focused on student experience and finances as they progress through their 10-year master housing plan, but obtaining a green-building certification like other new buildings on WKU’s campus is not one of their main priorities.

More recent buildings, such as Gary A. Ransdell Hall and the Augenstein Alumni Center, have received Leadership in Energy and Environmental Design certifications. LEED provides  guidelines “to create healthy, highly efficient and cost-saving green buildings,” according to its website.

WKU committed to obtain a LEED certification for all new buildings and renovations in its 2009 energy policy. However, the residence halls owned by the Student Life Foundation are not required to abide by commitments made by WKU. As a result, Hilltopper Hall, currently under construction, will not seek a LEED certification.

“We don’t go through that LEED certification, which quite frankly adds cost,” Kuster said. “You can do all the right things without necessarily going through the certification.”

One eco-friendly feature integrated into the design of Hilltopper Hall is composting equipment. The dining hall in the new building will transform food waste into soil-enriching mulch.

“We understand that housing is more than a place to live,” Kuster said. “It’s not just a bed. If it’s just providing some place for people to sleep, we can get Motel 6, and they’ll keep the light on for us.”

He listed higher graduation rates and greater involvement as benefits of campus living.

“Students have to feel a sense of belonging, and I think that we kind of got away from that at Western,” Kuster said. “With our new strategic plan, we’re really focusing on the student at the center of things.”

“I realized long ago that if HRL is to adopt a culture of sustainability, it is going to have to be student driven,” Ryan said.

Ryan was not involved in the creation of the plan but she thinks a LEED certification is important.

“In my perfect world, there would be no question that the building would be LEED platinum,” Ryan said.

The Student Life Foundation began discussing the future of campus housing in 2015. The 10-year housing plan has advanced through Northeast and Southwest halls to Hilltopper Hall. Plans are not yet finalized for the design and construction of the pod-style hall that will replace Barnes-Campbell Hall.

“We are having a consultant come in in the next several weeks to look at what we talked about in 2015,” Kuster said. “Are there some things that we need to maybe tweak now? What are things that they have seen working at other schools that maybe we haven’t thought about?”

All students are able to provide ongoing feedback on the 10-year housing master plan by contacting Housing and Residence Life. HRL can be reached by email at [email protected] and by phone at 270-745-4359.