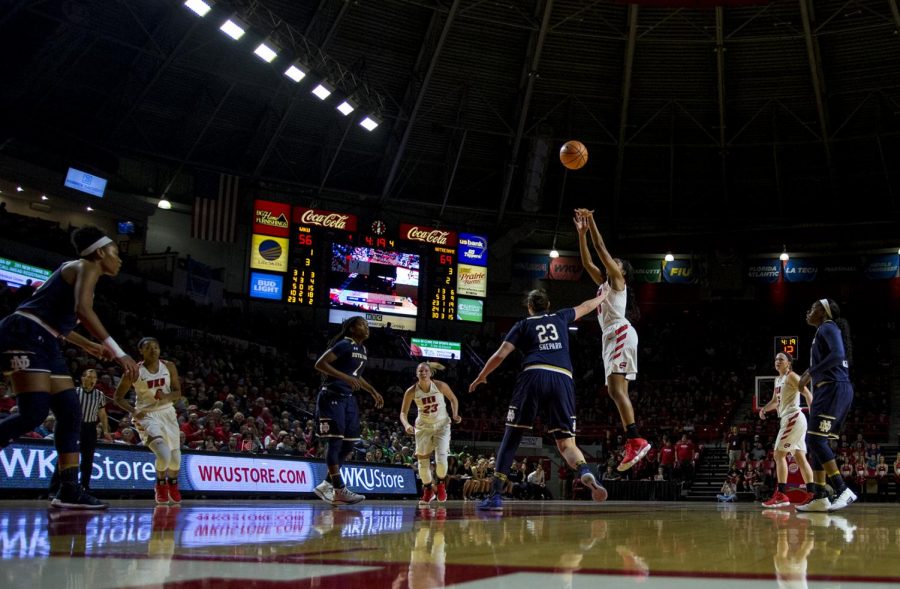 With non-conference play officially in the books, the WKU women’s basketball team now turns its full attention to its Conference USA slate, which begins on Thursday evening at 7 p.m. against longtime rival Middle Tennessee in Diddle Arena.

The Lady Toppers (9-4 overall) wrapped up the non-conference portion of their schedule with an 88-64 win over Division II Lee University (Tenn.) on Dec. 29. They put together a successful non-conference run to prepare them for league play. WKU beat No. 16 Missouri, won two tournament championships and dropped tough decisions to No. 6 Notre Dame, Iowa and Indiana, but battled until the end in each of those three losses.

Because of that, WKU head coach Michelle Clark-Heard believes her club is fully prepared for the conference season – and to take on the preseason C-USA favorite Blue Raiders right off the bat in Bowling Green.

“We’re just excited to start the conference here at home,” Clark-Heard said. “To be able to play against the team that was picked to win it is definitely exciting. I think the rivalry between both teams is always exciting. Over the past couple of years, I think we’ve found a way to figure out how to have a chance to compete and a chance to win – and that’s where we’re at right now, today.”

One place WKU didn’t spend much time at in 2017 was inside Diddle Arena, as it played nine of its first 13 games on the road. The Lady Toppers also haven’t played consecutive contests in Diddle all season.

After having to be road warriors, WKU now opens C-USA competition with its first three matchups on its home court, and Coach Heard said that’s very beneficial.

“When conference play starts out, you really don’t know what to expect. I think that’s one of the reasons why I’m really excited we’re starting here at home,” Clark-Heard said. “We’ve been on the road a lot so I think we’re very road tested but I just think we’ll be ready to handle whatever challenge is thrown at us.

“We’ve gotta continue getting better and that’s why the focus in practice and the things we’ve been doing we’ve had to get better and better.”

MTSU (8-5) enters Thursday’s game at WKU riding a two-game winning streak. The Blue Raiders, coached by Hall of Famer Rick Insell, beat Canisius 55-45 on Dec. 20 and then won 62-57 over Kentucky in their last time out on Dec. 28.

MTSU is led by Abbey Sissom, who is currently averaging 14.6 points per game. Alongside her, Jess Louro is also scoring in double figures with 10.0 PPG while also averaging 6.5 rebounds. MTSU averages just 58 points per game but is holding its opponents to 56.

“It will be a good challenge for the team to open up conference with a good team – and our rival team – so it will be a good test for us to see where we stand,” WKU sophomore guard Whitney Creech said. “You kind of like early tests to see where you’re at and it’s a good measurement to see what you need to improve on. It’s exciting.”

“They’re a veteran team,” said Clark-Heard of MTSU. “They have bigs. Sissom is playing really well – scoring and doing a lot of different things for them. They’re just going to do what they do, and that’s run their system, be ready to come in and compete and play hard and we understand and know that’s what they do.

“We’ve just gotta be prepared and ready to go.”